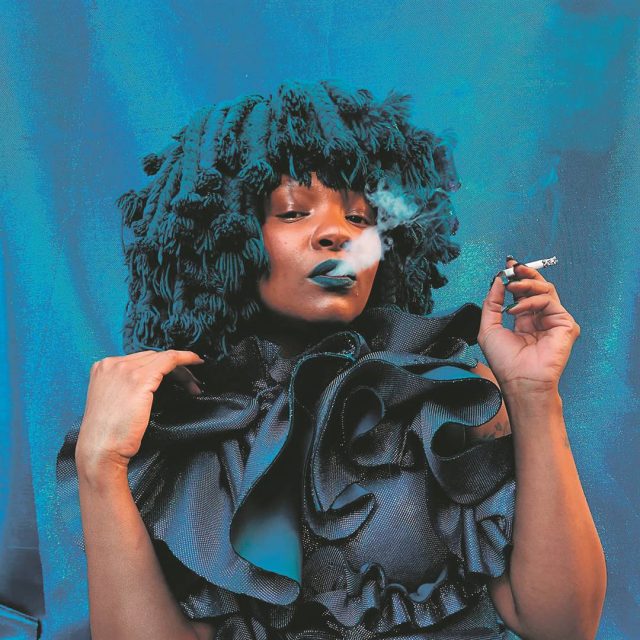 Sanelisiwe Twisha (born 20 November 1987) is a South African dancer, singer and songwriter who is popularly know as Moonchild Sanelly.

The well-known performer is known for her incredible dance skills.

People may attest to the fact that the country fosters and admires brilliance, which is her competitive advantage in the sector.

Her distinctive hallmark blue-colored hair, combined with her special music genre she established which she called Future ghetto punk helped to set her apart.

Moonchild Sanelly was born on the 20th day of November in 1987.

She was born and raised in Port Elizabeth in South Africa.

She had a traumatic childhood and raped twice in her life, and sadly, one of the perpetrators was her uncle.

The dancer was born into a musical family in Port Elizabeth, a city on Algoa Bay in the Eastern Cape of South Africa.

Moonchild Sanelly has a jazz singer for a mother, a hip-hop producer for a brother, and kwaito dancers for cousins.

She developed an interest in music while spending time with them.

She relocated to Durban in 2005 and got an opportunity to study fashion at Linea Fashion Design Academy.

Moonchild Sanelly started her career as a poet and gained acclaim for her poems and singing in Durban. She continued to pursue her music profession in her new location. Her music combines experimental electronic elements with Afro-punk and edgy pop.

Her strong kwaito, hip-hop, and jazz background has helped her to dominate the South African music market.

She started performing at Durban University of Technology in 2006, and she hasn’t stopped since. Moonchild specialized in poetry and hip-hop. The humble artist never referred to herself as a poet until she received positive feedback from her fans.

Moonchild Sanelly was later featured on the show Poetry with King Siso, a weekend show on Gagasi FM.

Her distinctive style of music and performance was found by many including huge names and corporations. The Red Bull brand discovered her through a song released by DJ Shimza. He featured her and this brought her to fame.

Moonchild Sanelly owns the clothing label Moonchild Cultwear and is a businesswoman. Moonchild also owns and operates a Naked Club which she clarifies is not a brothel.

Moonchild Sanelly has been in the industry for ten years and two years, and her music has taken her all over the world.

She is associated with DJ Maphorisa, Busiswa Gqulu and JazziDisciples.

Moonchild Sanelly is currently in a romantic relationship with and dating, Oarabile, a copywriter and singer who also happens to be the mother of three (3) daughters.

She doesn’t live with her children (as a result of her work schedule) at the moment because they are staying with her parents.

Moonchild Sanelly pays them a visit in Port Elizabeth every now and then. Artemis, one of her daughters, has followed in her parent’s path in music and is currently training in a dance and music school.

Moonchild Sanelly is active on Instagram where she uploads raunchy photos of her self.

She is known for posting advices related to sex for her fans. She is a woman’s right activist.

The talented South African musician, Moonchild Sanelly has amassed an estimated net worth of $500,000-$750,000.