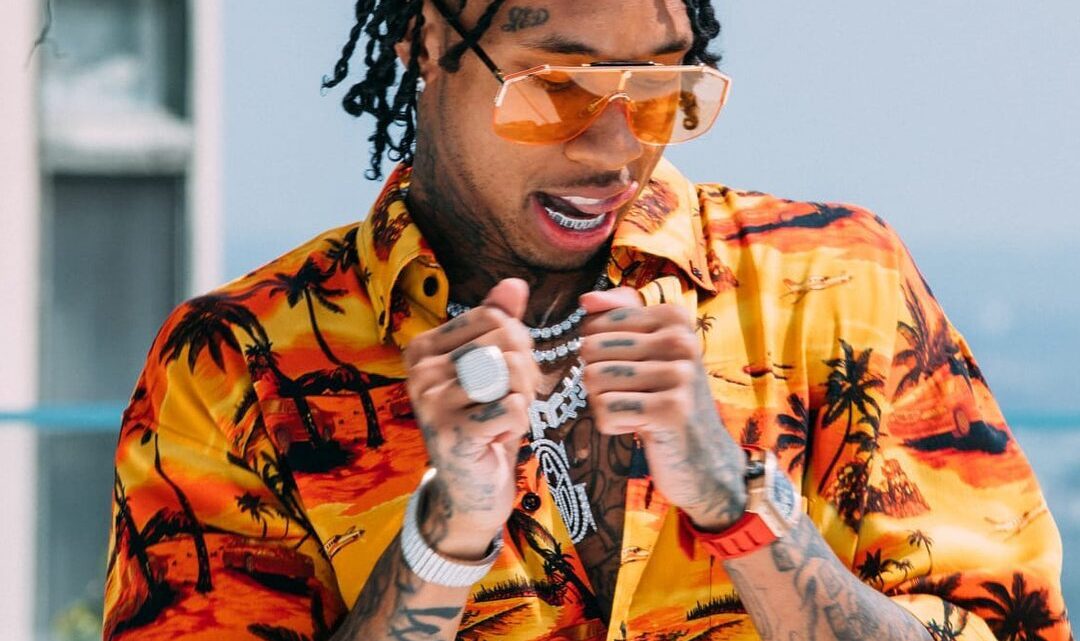 Michael Ray Nguyen-Stevenson (born November 19, 1989), better known by his stage name Tyga, is a prodigious American rapper and songwriter. Having cut his teeth with a series of independent releases, he signed a recording contract with the esteemed labels Young Money Entertainment, Cash Money Records, and Republic Records in 2008.

Tyga‘s debut album, No Introduction, was released that same year and was followed by the critically-acclaimed Careless World: Rise of the Last King and Hotel California, both of which reached the lofty heights of number 2 on the U.S. Billboard 200. His fourth album, The Gold Album: 18th Dynasty, was released in 2015 and debuted at a highly respectable number 4 on the Billboard 200.

In addition to his flourishing music career, Tyga has also made appearances on the reality television series Kingin’ with Tyga and on the E! reality series Keeping Up with the Kardashians, which features his then-girlfriend Kylie Jenner.

Hailing from the streets of Compton, California, Michael Ray Nguyen-Stevenson, better known by his stage name Tyga, was born on November 19, 1989, to parents of mixed Jamaican-Vietnamese heritage. His mother, Pasionaye Nguyen, is of Vietnamese origin, while his father is of Jamaican descent.

Tyga spent the majority of his formative years in Compton before relocating to the neighboring city of Gardena at the tender age of 12. Growing up, he was heavily influenced by the likes of Fabolous, Lil Wayne, Cameron, and Eminem, and he has often spoken about his humble beginnings in a low-income family.

However, his background was called into question in 2012 when a leaked video showed his parents cruising in a Range Rover, leading some to speculate about the true nature of his upbringing.

Despite this controversy, Tyga graduated from Gardena High School and has since gone on to become a successful rapper and songwriter, signing a recording contract with Young Money Entertainment, Cash Money Records, and Republic Records in 2008.

Tyga and Blac Chyna first crossed paths at a star-studded after party for Chris Brown‘s F.A.M.E. Tour in Miami on October 5, 2011. It was love at first sight, and the couple announced their relationship to the world just a few weeks later, on November 9, 2011.

Their romance bloomed by the following March when they graced the cover of Urban Ink magazine together. In October 2012, Blac Chyna gave birth to their son, King Cairo Stevenson, and Tyga celebrated by splurging on a lavish $6.5 million property in the exclusive Los Angeles suburb of Calabasas.

Both Tyga and Blac Chyna paid homage to their son by getting tattoos of his name on their bodies, and in December 2012, Blac Chyna confirmed that the couple was engaged. However, their fairytale romance came to an end in 2014.

In 2010, Tyga married Jordan Craig, but the couple divorced in 2011. This was not widely known until a leaked document revealed the marriage in 2021. Since his divorce, Tyga has remained single and has not been publicly linked to other partners.

Early in his career, Tyga put out a handful of demo tapes and mixtapes. His 2007 debut mixtape, Young On Probation, caught the attention of Travie McCoy, the lead singer for the California rap group Gym Class Heroes. Travie McCoy, impressed by the young musician’s potential, offered him a recording contract with DCD2 Records, one of the many independent record companies (known then as Decaydence Records).

Around the same time, Tyga collaborated with fellow West Coast rapper Schoolboy Q and formed the record label G.E.D. Inc. (Grinding every day, Getting every dollar, or Getting educated every day). He also has a G.E.D. Inc tattoo above his right eyebrow.

On June 10, 2008, Tyga‘s first album as a solo artist, titled No Introduction, came out on Decaydance Records. The single Coconut Juice with Travie McCoy came out before the album. Diamond Life, one of the songs on this album, was used in the video games Need for Speed: Undercover and Madden N.F.L. 2009, as well as in the movie Fighting, which came out in 2009.

Late in 2008, Tyga inked a record deal with Lil Wayne‘s Young Money Entertainment, a branch of Cash Money Records. He and Lil Wayne first crossed paths at the 2008 Video Music Awards, where he performed a remix of This Ain’t a Scene, It’s an Arms Race by Fall Out Boy.

After signing with the label, Tyga made an appearance on the Young Money track Bedrock and released the mixtape Fan of a Fan with Chris Brown, DJ Ill Will, and DJ Rockstar. The mixtape featured collaborations with other artists, including Bow Wow, Lil Wayne, and Kevin McCall. Music videos were released for four of the tracks: Holla at Me, G Shit, No Bullshit, and Deuces.

At the 53rd Grammy Awards, the song Deuces was a nominee for Best Rap/Sung Collaboration. Chris Brown‘s fourth studio album, F.A.M.E., featured the track, among others. In an interview with MTV, Tyga divulged that the mixtape was crafted in a mere seven days.

Tyga is believed to be worth approximately $5 million, thanks to his successful music industry career and various business endeavors.

He has come a long way from his humble beginnings, and it is evident that he is just getting started. With his net worth expected to continue growing, Tyga is doing exceptionally well.