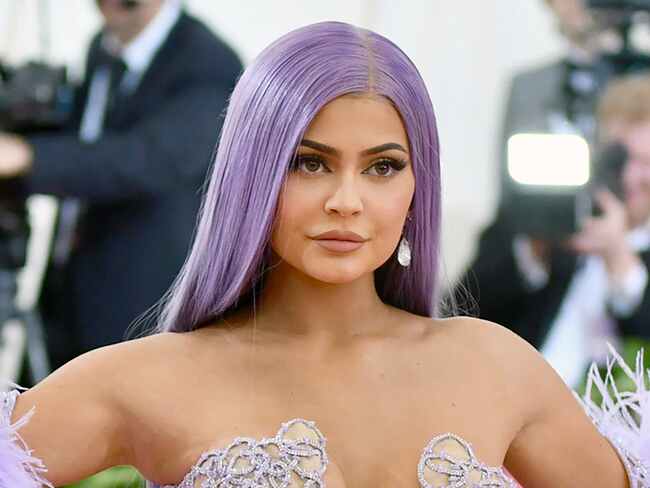 Kylie Kristen Jenner (born August 10, 1997) is a beautiful and eye-catchy model, socialite, and businesswoman from the United States.

She is the founder and owner of the cosmetics firm, Kylie Cosmetics and has starred in the E! reality television series, Keeping Up with the Kardashians since 2007.

In 2012, at the age of 14, she and her sister, Kendall teamed with the apparel brand, PacSun to launch the Kendall & Kylie apparel line. Jenner debuted her own cosmetics line, Kylie Lip Kits, in 2015, which was then renamed, Kylie Cosmetics the following year. They also released Kendall and Kylie, a mobile app that debuted at number one on the iTunes App Store.

The Jenner sisters were named to Time magazine’s list of the most influential kids in the world in 2014 and 2015, citing their significant influence among adolescents on social media. She is one of the most followed persons on Instagram as of December 2020, with over 233 million followers.

Jenner was named to the Forbes Celebrity 100 list in 2017, making her the youngest person ever to do so. She starred in Life of Kylie, a spin-off series that premiered on E! on August 6, 2017. She was named the most influential celebrity in the fashion industry by the New York Post in November 2018.

Kylie Jenner was born in Los Angeles, California, on August 10, 1997. She has an elder sister, Kendall Jenner, and eight half-siblings.

She is the youngest daughter of former Olympic decathlete champion Caitlyn Jenner (then known as Bruce Jenner) and television personality and businesswoman, Kris Jenner (née Houghton).

Caitlyn Jenner has three elder half-brothers, Burt Jenner, Brandon Jenner, and Brody Jenner, and one older half-sister, Casey Jenner, on her mother’s side of the family.

Is it true that Kylie Jenner attended high school? What about going to college?

Let’s start from the beginning.

Kylie Jenner was homeschooled from 2012 until 2015. She graduated from Laurel Springs School in Ojai, California, with a high school certificate thanks to her at-home schooling program.

Kendall, Kourtney, Kim, Khloé, Rob, and Jenner‘s parents and siblings, began participating on the reality television series, Keeping Up with the Kardashians in 2007, which follows the personal and professional lives of their family members.

The show was a hit for its network, E!, and it spawned a slew of spin-offs, including Kourtney and Kim Take Miami, Khloé & Lamar, Kourtney and Kim Take New York, and Kourtney and Khloé Take The Hamptons, all of which Jenner has been in. In August 2011, the sisters hosted Glee: The 3D Concert Movie at the Regency Village Theater in Westwood, California.

Kylie Jenner made her acting debut in a trailer for the 2014 Much Music Video Awards, which she co-hosted in Toronto, Ontario, Canada, in June 2014. The Jenner sisters made an appearance in PartyNextDoor‘s Recognize music video in August 2014. She also participated in the music video for Jaden Smith‘s song, Blue Ocean. Jenner and her sister Kendall co-wrote Rebels: City of Indra: The Story of Lex and Livia, a dystopian science fiction story about two twin sisters named Lex and Livia who live in a “self-sustaining biosphere” made out of the remnants of Earth called Indra.

While presenting brother-in-law Kanye West‘s performance at the Billboard Music Awards in May 2015, the Jenner sisters were booed. Kylie Jenner confesses to getting a lip augmentation on an episode of Keeping Up with the Kardashians that aired in May 2015. Her lip filler-enhanced lips sparked rumors and won her attention.

She previously revealed that she just used lip liner and excessively lined her lips before the premiere of the program. As a consequence, the “Kylie Jenner Challenge” was born: suctioning one’s lips into a tiny glass in order to increase blood flow and inflate the lips (though there was no indication that Jenner herself employed this method).

“I’m not here to try to push people/young girls to look like me or to think this is the way they should look,” Jenner answered. She stated in August 2015 that her debut lipstick collection, Kylie Lip Kit, will be released as part of her self-titled lip kit. The Jenner Sisters starred in Justine Skye‘s I’m Yours music video in November 2015.

Kylie Jenner‘s cosmetic brand was rebranded Kylie Cosmetics in February 2016, and the number of kits created increased from 15,000 to 500,000. She starred in a three-minute commercial film for a line of lip glosses directed by Colin Tilley and featuring Karin Jinsui, Mara Teigen, and Jasmine Sanders in March 2016.

The song used in the video was discovered to be “Three Strikes” by Terror Jr, a band formed on the same day as the video’s release; nevertheless, the lead vocalist subsequently proved to be vocalist Lisa Vitale, was widely assumed to be Jenner herself.

Kylie Jenner, on the other hand, later denied any affiliation with the band. She made her musical debut in May 2016, rapping alongside Lil Yachty, Jordyn Woods, and Justine Skye on producer Burberry Perry‘s song, Beautiful Day.

She appeared in another PartyNextDoor music video for his single, Come and See Me the following month. After hearing that his date had declined, she made a surprise appearance at the Rio Americano High School prom in Sacramento with student Albert Ochoa in April 2017.

In June 2017, Jenner was ranked 59th on the Forbes Celebrity 100, which ranks the top 100 highest-paid celebrities over the preceding 12 months, with a net worth of around $41 million, making her the youngest person on the list at 19 years old.

Kylie Jenner appeared in Life of Kylie, a reality program about her life that began in August 2017. Kylie Cosmetics, in conjunction with her mother Kris Jenner, debuted the Kris Cosmetics collection on Mother’s Day 2018. On Black Friday 2018, Jenner and her half-sister Kim Kardashian released their second collaborative KKW x Kylie Cosmetics line, after the release of their first collection in 2017.

Kylie Jenner Skin debuted in 2019 and is still going strong

Kylie Jenner and her half-sister Kim Kardashian‘s KKW Beauty collaborated to introduce a new fragrance in April 2019. Her first excursion into scent was this partnership, which debuted on April 26. a Jenner debuted her own skincare line, Kylie Skin, on May 22.

After launching a unique line of lip cosmetics called Koko Kollection in 2016 and the second half in 2017, this was their third collaboration. She confirmed in September that she will be the makeup artistic director for Balmain’s Spring 2020 catwalk show during Paris Fashion Week.

The Jenner Sisters responded to news that their fashion label, Kendall + Kylie, had neglected to pay factory employees in Bangladesh as a result of the COVID-19 outbreak the following month. Global Brands Group (GBG) has previously included the Kendall + Kylie brand on its website, according to reports.

As a consequence, the Jenners claim that their firm is owned by 3072541 Canada Inc., despite the fact that their brand “had worked with CAA-GBG in the past, in a sales and business development capacity exclusively,” and that they “do not currently have any contact with GBG.”

Kylie Cosmetics introduced the Summer Sailor line in August 2020, which included Jenner‘s first-ever artificial lashes. She made an appearance in Cardi B and Megan Thee Stallion‘s WAP music video in the same month, with vocalists Normani and Rosalia, and a petition to get her presence deleted out of the video received over 65,000 signatures.

Kylie Jenner is the highest-paid celebrity in 2020, according to Forbes.

One of the most active social media profiles in the world belongs to the influential celebrity. Kylie Jenner has over 239 million Instagram followers.

Tyga was spotted getting close to Kylie Jenner during her 17th birthday celebration in August 2014. Tyga left his engagement with Blac Chyna, his fiancée and son’s mother, a few days later. Kylie Jenner and Tyga made their relationship public in 2015 after she turned 18. She then appeared in two of Tyga‘s music videos, Stimulated and Dope’d Up, respectively. Jenner and Tyga split up in April 2017.

Kylie Jenner first appeared with Travis Scott at Coachella in April 2017. Stormi Webster, Jenner‘s daughter, was born on February 1, 2018. She starred in Scott‘s 2018 album Astroworld‘s music video for Stop Trying to Be God. They split up in September 2019 but were quarantined together for the protection of their daughter during COVID-19.

In 2019, Woods began seeing Tristan Thompson, Jenner’s half-boyfriend. sister’s Jenner and Woods‘ friendship came to an end as a result of the controversy, and Jenner slashed the price of her Woods-themed lip kit once the news leaked.

The 24-year-old made headlines when Forbes named her the world’s youngest “self-made billionaire,” a phrase that even Kylie Jenner acknowledges is debatable. She earlier told The New York Times, “I can’t say I did it alone.” “Technically, no, I don’t have any inherited money if they’re simply talking about money.

But I’ve gotten a lot of aid and a lot of exposure.” That platform was leveraged to develop her $29 lip kits into a full-fledged cosmetics brand, Kylie Cosmetics, which she just sold for $600 million to Coty, a multinational beauty corporation.

However, Forbes later determined that the family had exaggerated the company’s profits by misreporting its earnings. Kylie Jenner net worth is then believed to be little about $900 million.