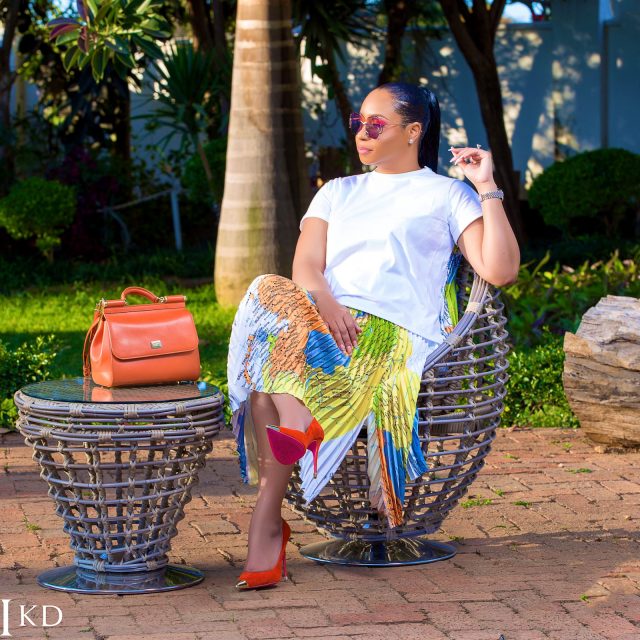 Socialite, Businesswoman, Model, Mother – one of Zimbabwe’s most influential and spoken about women; Pokello Nare. She rose to fame in mildly unconventional ways, rising above scandal and ridicule to make herself a household name.

Her parents are retired Colonel George Nare and Bessie Muzvidzwa. She was raised in Harare but is originally from Manama village in Gwanda, Zimbabwe.

Pokello Nare is one of Zimbabwe’s style icons, always ahead of the trends and putting herself together well. She is very popular for her fashion sense, and this translates into her boutique, Addicted 2 Shoes, located at Sam Levy’s Village in Borrowdale.

If you want to have a complete picture of what we’re talking about, head to her Instagram account to have a look.

Pokello Nare has mentioned that she loves to cook, and this is shown in the food she sometimes posts on social media. With all the other roles she has to play, she makes time to cook for her family. Ex-husband Elikem Kurmodzie had nothing but praises for her as a wife at home. He mentioned how she used to cook and even breastfeed constantly at home. So you can imagine that it’s possible to bump into her in a grocery store. She is a practical diva with finesse in the kitchen.

If you would like to build your kitchen her way, look out for the classic Cleo 7 piece cookware set at R999 and the Russell Hobbs Purifry Air Fryer for only R2499 on the Pick n Pay online specials this week. You will get 2 Dish Hot mats, and a Clean Cut Utility Knife set for free with these purchases. Plus, if you use your Saver card and start collecting stamps, you will end up with Premium glassware, and your days of sipping champagne in your garden or your patio like Ms Pokello below will be plenty.

Pokello Nare mostly posts meals she’d have made on Twitter.  She has said that someday she will put together a cookbook to showcase her love for the craft. We’ve been inching in on her posts daily, but the book news is yet to be released.

As we mentioned earlier, Pokello Nare has a boutique that sells shoes primarily. She also has her own shoe brand called Pokello Pink Bottoms and her own nail lacquer. Her shoe brand has three lines that reached the market; Big Brother Africa: The Chase, Size Me Up, and Spell My Name.

She also models some of her shoes and is a brand ambassador for several other brands, namely Victory Co, Vault Cosmetics, and the Ndeipi Zviri Sei-Sei t-shirt brand. She is also a philanthropist and HIV testing advocate, running annual campaigns to encourage young people, especially women, to know their HIV status.

Before her stint on Big Brother Africa, Pokello Nare was in a relationship with rapper, Stunner. She then broke up with him on national television and began her relationship with her housemate, Elikem Kurmodzie, whom she later married in 2013 and had a son, Tristan.

Their marriage lasted four years and the reason given at the time of their divorce was ‘irreconcilable differences. Both of them have since clarified that Elikem was not ready for marriage at the time and the long distance between them complicated their relationship. As of November 2017, Pokello has been in a relationship with businessman Ronald ‘Rondon’ Muzambe.

Pokello is not one to shy away from controversy but instead uses it to rise even higher in her pursuit of what makes her happy. She was once involved in a sex tape scandal with her ex-boyfriend, Stunner, but this did not stop her from participating in Big Brother Africa Season 8.

The one thing we admire her for is her tenacity –  she moves and gets things done; it’s no wonder she has risen to be the brand she is today.