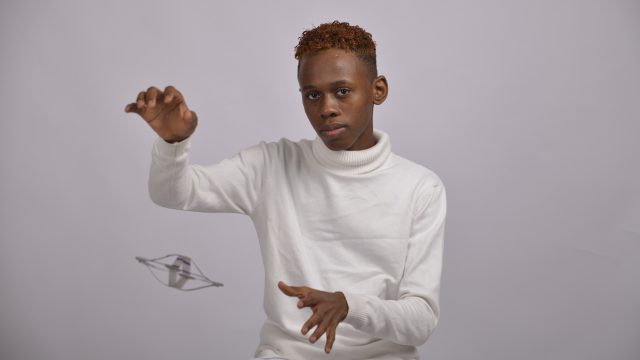 He became a sensation after series of his magic videos which ranges from hypnotizing to cards play went viral.

Babs Cardini was born in the city of Lagos to Mr and Mrs Kasunmu, who are Muslims.

He had his childhood experience in the cities of Lagos.

He has a National Diploma in Computer Engineering.

From the early age of five, he had developed a passion for magic and started honing his craft gradually. His career began fully when he turned sixteen.

Babs Cardini cites magicians like David Copperfield, Dynamo as his key influence in the industry.

He says that he learnt some of his tricks from watching videos on YouTube, and instantly knows how to replicate the tricks.

One of Babs Cardini‘s memorable magic tricks was when he asked someone to pick a random card and looking into the person’s eyes, he told him the card he had picked without looking at it.

Asides from magic, he is also a Skate Boarder and skates regularly in his neighbourhood.

He achieved much fame after he performed magic on the streets of Lagos.

Though some people claim he is using juju or voodoo, he is gifted and has mastered his craft over the years.

Some of Babs Cardini‘s popular magic tricks include the following:

He has travelled to Los Angeles, California to perform his magic tricks.

He has been earning a steady income from his gift.

Babs Cardini has been viewed as the heir to Moshood Peller, Nigeria’s iconic magician who is the father of Shina Peller.

At the moment, he calls himself Africa’s Best Magician.

He has over 191k followers on his Instagram page where he posts videos regularly.

He is the brand ambassador of a couple of businesses in Nigeria.

Babs Cardini isn’t married and he is not in a relationship at the moment. He resides in Lagos, Nigeria.

The Nigerian magician, Babs Cardini who has become one of the African youngest known magicians an estimated net worth of $50,000-$200,000.