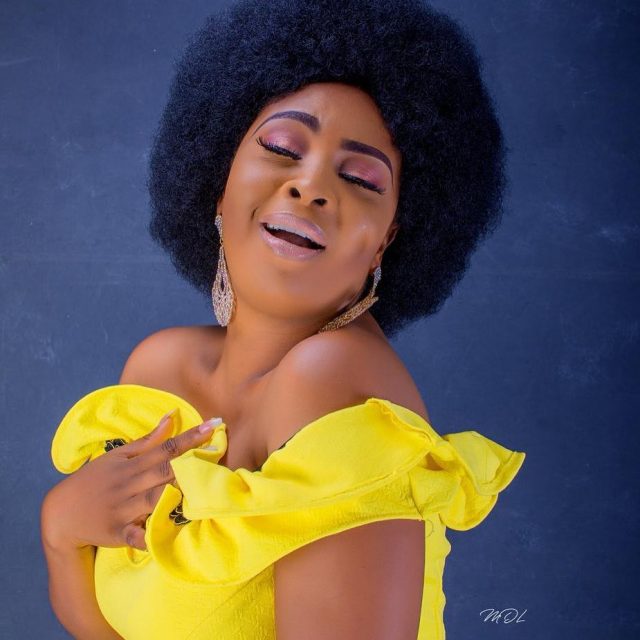 Bidemi Kosoko (born 12th of October, 1988) is a popular Nigeria Nollywood actress whose films are very famous in Nigeria.

The actress is known for the challenging and fantastic roles in Yoruba films. She also made an appearance in a popular movie titled, Alakada Reloaded. The movie was directed by veteran Nigerian actress, Toyin Aimakhu Abraham.

Bidemi Kosoko is reported to be 32 years old as of 2020, the movie actress was born on the 12th of October, 1988, in Nigeria. She always ensures that her birthday is celebrated every year and her zodiac sign is Libra.

Bidemi hails from a talented family who are very popular in the movie industry. She is the daughter of popular veteran actor, Jide Kosoko. Her stepmother, Henrietta Kosoko was also a movie actress and the president of the Association of Theatre Arts.

Bidemi also has an elder sister who is also an Actress named, Sola Kosoko and a brother named, Tunde Kosoko.

Both Bidemi and Sola are born of the same mother who died in the year 1993. There are not many details about their biological mother.

Though there is not much information on where Bidemi Kosoko started her education, both primary school, and secondary school. However, the actress alongside her sister studied theatre art at the university level.

Bidemi Kosoko‘s husband is known as ‘Mr. Oyaije‘, who happens to be a popular Nigerian designer.

The movie actress gave birth to her first child who happens to be a male in the year 2019. It was a day of joy as another bouncing baby boy was added to the Kosoko family.

The fans celebrated the arrival of the new child while sending their prayers to the child and the couple. She also has a daughter, Funke who is 7 years old.

Bidemi Kosoko is active in social media, she has garnered over 1.6 million followers on her Instagram.

She can be reached using the Instagram handle, @bidemi_kosoko.

Bidemi Kosoko has amassed an estimated net worth of $550,000. This includes all her income, cash, and properties. This has been possible has the actress has various sources of income, which has helped her amount so much wealth.