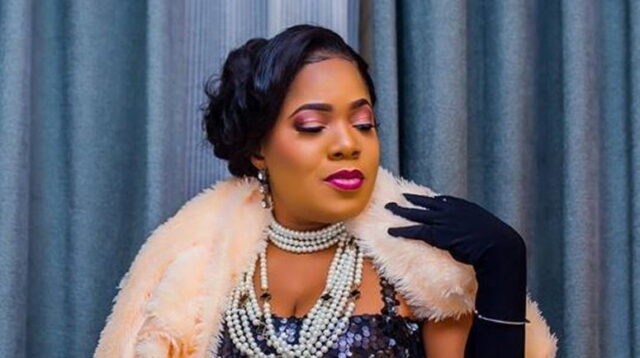 Due to her level of influence and followership, she is regarded as a household name in the Nigerian movie industry.

Recently, Toyin Abraham created major headlines after the release of her movie titled, Fate of Alakada which earned her accolades in the months that followed.

She is currently married to Kolawole Ajeyemi, a fellow actor, and is also a proud mum.

Prior to her change of name in 2016, Toyin Abraham Ajeyemi was previously known as Toyin Aimakhu.

She was born in Auchi, Edo State but received early grooming in the Southwestern part of Nigeria.

Toyin Abraham grew up in the ancient city of Ibadan, Oyo State, amongst Yoruba-speaking citizens of the country. Her passion for acting stemmed from her love for traditional plays which aired on local TV stations at the time.

Though her guardians were emphatic on schooling and securing a white-collar Job, she was able to live out her schooling days whilst attending movie auditions occasionally.

Her ability to read situations and handle them efficiently endeared her to many of her childhood friends.

After completing her basic studies at a local school in her neighborhood, Toyin Aimakhu Abraham enrolled at St. Anne’s School; located in Ibadan, and was amongst the best graduating pupils of her set.

She applied for a Pre-National Diploma at Osun State Polytechnic, Iree; spending a couple of years at the Institution and furthering to an Ordinary National Diploma (OND) level.

In 2003, Toyin Aimakhu Abraham made her debut in the Nigerian movie industry when actress, Bukky Wright visited Ibadan for a movie shoot.

At the time, she was still a student but took out time to be part of the auditions. After her performance was deemed exceptional, she was called on to star in other movies.

Toyin Aimakhu Abraham is currently a household name in the Nollywood industry. After making her debut, she has gone on to feature in both Yoruba and English movies such as;

Recently, Toyin Aimakhu Abraham stunned her fans after directing a film titled, Fate of Alakada. The movie which graced the best of the box office also earned her accolades after its release.

The movie star turned director also runs a reality show titled, Keeping Up With Toyin Aimakhu, followed by her fans on social media.

Toyin Aimakhu Abraham got married to fellow actor, Kolawole Ajeyemi in a traditional wedding held in July 2019. The couple welcomed their first child the following month.

Prior to her union with Ajeyemi, Toyin Abraham had previously tied the knot in 2013 with Adeniyi Johnson but parted ways with the Nollywood actor two years later.

Toyin Aimakhu Abraham‘s level of influence surpasses the Nollywood industry. She is also a major voice on social media with more than 10 million followers to her handles.