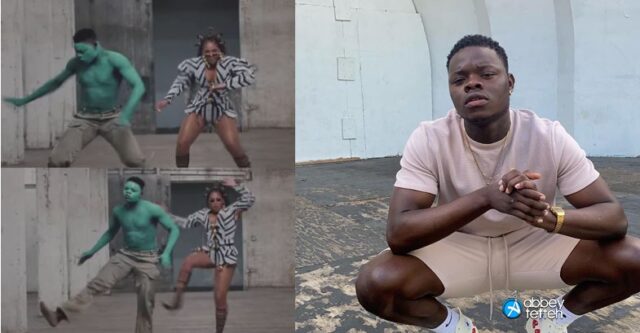 He is from Nigeria but currently resides in America. The young chap came to the limelight after he was cast to dance in Beyoncé‘s music video, Already.

He was the blue man in the video, who danced side by side with the female pop star.

Papi Ojo was born in the commercial city of Lagos State in 1998. His parents are Mr. and Mrs. Ojo.

He comes from the Yoruba tribe. He is the last child of the family and has two siblings – a brother and a sister.

He was raised partly in the city of Lagos before emigrating to the United States with his family at age eleven.

As young boys, Papi Ojo and his older brother, Emmanuel were very much interested in dancing. They spent their free time learning and practicing new dance moves.

Some of these dance moves were picked on the streets while some were discovered while watching TV.

He attended middle and high school in the United States, graduating from the latter in 2016.

He is yet to complete his university education.

When Papi Ojo became older, he and his brother formed a three-man dance group with a friend, Caleb Bonney a.k.a Ghana Boi. The dance group is called A.V.O Boyz. The acronym A.V.O stands for Africa’s Very Own.

In the short time that the group has been formed, they have appeared in many top music videos. They also work as dancing instructors, training people who are interested in learning new dancing moves.

Papi Ojo has had the opportunity of working with top singers such as Janet Jackson, Teyana Taylor, A$AP Ferg, and Big Sean.

He has also been hired by Rihanna‘s choreographer Tinasha Scott to teach her some dance moves.

Papi Ojo finally came into the international limelight after he worked with Beyoncé on her album Black Is King.

He was part of the choreographers in the Spirit and Already Video. In the latter video, he was seen dancing side by side with the iconic singer.

Due to his role in that music video, he got a new nickname The Blue Man. Since then, he has had more paying dancing jobs come his way as many artists want to work with him.

Asides from dancing, Papi Ojo is also a musician. He started composing songs from his high school days and has released a number of singles.

He dropped the single, Secret on the 18th of January 2020. The single which is making waves international received collaboration from the female artiste, Bemi Soul.

As an actor, he was featured in the short film Hustle Go Pay. In 2020, he starred in the feature film Privilege.

He is one of the fast-rising male models in America and has worked with brands such as Addidas, Beonica Dunn, The North Face, Lulu Visions, Ashanti Beads, and Calla Kessler.

Papi Ojo has over 62.6k followers on his Instagram page.

Papi Ojo is 24 years old. He is a devout Christian and currently single not married. He and his family reside in the United States.

In 2016, Papi Ojo lost his elder brother, Emmanuel a.k.a Sedo. His brother who passed away at the young age of 22 had died while trying to save Stephen from drowning.

Papi Ojo‘s brother’s death affected him a lot because they were very close. Nevertheless, he has pushed past his grief and ensured that he achieved success as a dancer. Because he believes that is one way he can make his brother proud wherever he is.