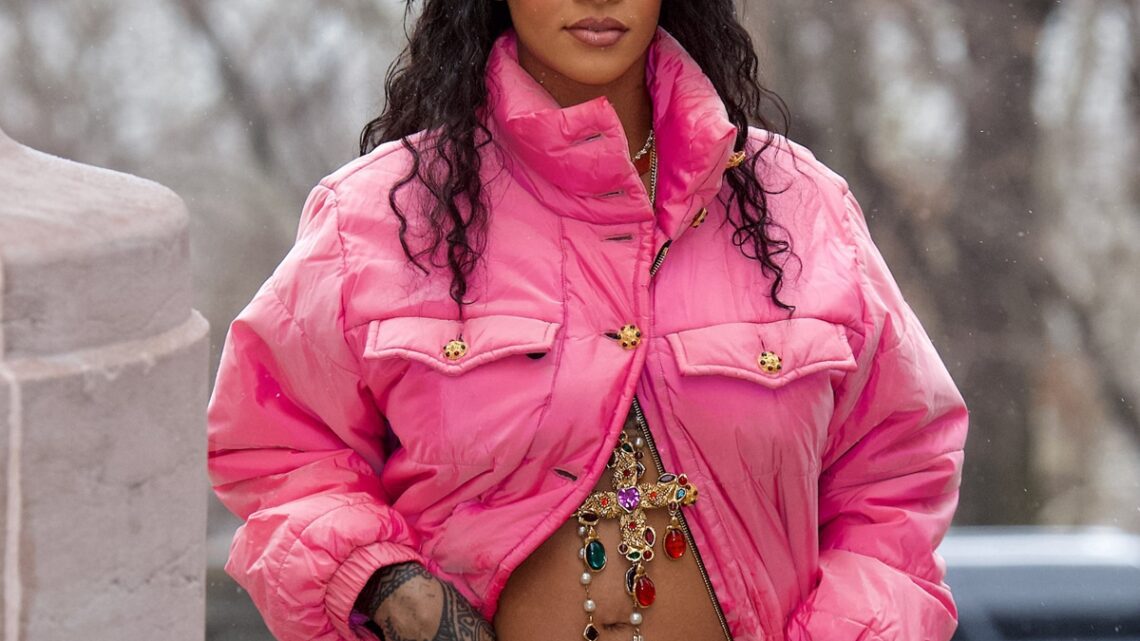 Robyn Rihanna Fenty (born February 20, 1988) is a sensational and phenomenal Barbadian singer, actress, fashion designer, and businesswoman. The iconic singer was discovered by American record producer Evan Rogers, who would later invite her to the US to record demo tapes.

After signing for Def Jam in 2005, she attained nationwide recognition with the release of her first two studio albums called Music of the Sun in 2005, and A Girl Like Me, in 2006. Both albums peaked within the top ten of the US Billboard 200 chart.

Aside from music, Rihanna is celebrated for her dedicated involvement in humanitarian causes, entrepreneurial ventures, and the fashion industry. She is the founder of a nonprofit organisation called Clara Lionel Foundation, a cosmetics brand called Fenty Beauty, and a fashion house called Fenty under LVMH.

Additionally, Rihanna has ventured into acting, appearing in major roles in movies such as Battleship, Home, Valerian and the City of a Thousand Planets, and Ocean’s 8.

Rihanna joined the world on February 20, 1988, in the city of Saint Michael, Barbados.

She’s a daughter to Monica Braithwaite (mother), an Afro-Guyanese accountant, and Ronald Fenty (father), a warehouse supervisor, with ancestry from Barbadian of African, Irish, English, and Scottish.

Her childhood wasn’t an easy one. It was marred by constant arguments between her parents and their eventual divorce. Her father was an alcoholic and a cocaine addict but had since then overcome his addictions.

Rihanna loved music from a young age and began singing when she was seven. Due to that, she went on to form a musical trio along with her classmates as a high school student.

Unlike many other celebrities, Rihanna lacks an extensive collegiate upbringing. In the end, she never graduated, dropping out at fifteen to pursue a career in music. She spent her high school days at the prestigious Combermere School in Barbados.

The school is prestigious for winning numerous awards in the arts, along with a well-established music program. Secondary school provides many outlets for students to express their creativity.

Notwithstanding, this lack of proper education does not exclude Rihanna from believing in its benefits. In 2012 she was responsible for launching the Clara Lionel Scholarship Foundation.

It provides up to US$50,000 per year to deserving students from Barbados to Haiti and gives students a chance to complete a degree at a school of their choice.

Rihanna‘s career as a musician skyrocketed when she signed a contractual agreement with Def Jam Recordings, which brought out her debut album, Music of the Sun, in 2005. Debuting at No. 10 on the Billboard 200, the album sold over two million copies worldwide despite only receiving mixed reviews from critics.

Her second album, which she titled A Girl Like Me, was released the following year. The album not only became a huge commercial success charting in the top ten in over 13 countries but also established the young singer as a teenage sensation. It featured a hit single titled SOS, which peaked at No. 1 on the US Billboard Hot 100.

After more success in the ensuing months, Rihanna embarked on the Glow in the Dark Tour alongside Kanye West, N.E.R.D, Lupe Fiasco, and others in 2008. The concert tour travelled throughout Latin America, Europe, Asia, New Zealand and Australia and received critical acclaim.

In 2009, her much-anticipated album titled Rated R was released. She adopted a new musical format in this album, which was well-received by her fans. The album peaked at No. 4 on the US Billboard 200 chart and featured a single titled Rude Boy, which topped the US Billboard Hot 100 for up to six weeks.

The year 2010 was a very eventful year for Rihanna. Her album titled Loud became a blockbuster prompting the singer to embark on the Loud Tour to promote it further. Loud featured numerous hits, including What’s My Name, Only Girl (In the World), and S&M. She also featured on several hits by other artists, including Eminem‘s Love the Way You Lie, Jay-Z‘s Run this Town, and Kanye West‘s All of the Lights.

Her next album, called Talk That Talk, was released in 201. It was a dance-oriented pop/R&B crossover album with elements of hip hop, electronic dubstep, and house music. The album debuted No. 3 on the US Billboard 200 and featured hit singles such as Talk That Talk, We Found Love, and You da One.

In 2012, Rihanna introduced an album titled Unapologetic. The album was mainly a pop and R&B album incorporating elements of hip hop, EDM, dubstep, and reggae. It spawned seven singles, including international hits titled Diamonds and Stay. One of her most loved albums is called Home, which was released in 2015.

In addition to a blistering musical career, she has also appeared in minor roles in films such as This Is the End, in 2013, Annie, in 2014, and Home in 2015. She is also a businesswoman and is a co-owner, along with various other music artists, of a music streaming service called Tidal.

In late 2015, Rihanna signed a US$25 million contract with telecommunication giant Samsung that would see her promoting Samsung’s Galaxy line of products whilst Samsung, on their part, would sponsor the release of her eighth studio album and its supporting tour.

On January 28, 2016, she released her eighth studio album titled Anti exclusively through a streaming service called Tidal. The album peaked at No. 1 on the US Billboard 200, becoming her second No. 1 and eighth top 10 albums on the chart.

In the same year, Rihanna was featured in several singles. The first was a collaboration single with Kanye West titled Famous, where Rihanna provided uncredited guest vocals. But she was officially featured on Calvin Harris‘ This Is What You Came For.

Rihanna, who featured Drake on her single titled Work in 2015, was featured this time in Drake‘s Too Good and on Mike WiLL Made-It‘s Nothing Is Promised. In June 2016, she released a song titled Sledgehammer, which was a single from the Star Trek Beyond movie soundtrack.

On August 28, 2016, Rihanna was honoured with the Michael Jackson Video Vanguard Award at the 2016 MTV Video Music Awards. However, this was after performing various medleys of her hit songs.

Rihanna went on to release several collaborations in 2017. First, she was the featured part in a song by Future titled Selfish, which was the lead single from the rapper’s sixth studio album called Hndrxx.

In October 2017, Shakka disclosed that he was working with Rihanna on an album called Absolutely Insane. Furthermore, she confirmed that the album would be released in 2019 and later revealed that it is a reggae project.

In September 2019, it was announced that Rihanna had signed with Sony/ATV Music Publishing. In December 2019, she alluded to her album being complete and indefinitely withholding the release date in an Instagram post.

Rihanna was next featured on Canadian singer PartyNextDoor‘s song titled Believe It, which was released to the joy of fans on March 27, 2020.

Rihanna is a skilful, loved and well-to-do artist and the recipient of eight Grammy Awards from 24 nominations.

The single titled Umbrella earned her a first Grammy Award in 2008 and went on clinch several more, including those for Run This Town, in 2010 and Only Girl (In the World), in 2011.

Rihanna also holds the Guinness World Records for Female artists with the most U.S. number-one singles in a year (2010), Most consecutive years of UK No.1 singles (2011), and The Best Selling Digital Artist (U.S.) (2012).

Rihanna is one of the most loved and followed artists in the world, with over 133 million followers on Instagram, over 102 million on her Facebook page with several more followers on Twitter.

She has an impressive figure measurement of 34-24-36. Her eyes are green, and her hair is dark brown on several occasions. On others, it is dyed black.

Rihanna has dated several high-profile men, including singer Chris Brown, baseball star Matt Kemp, and Canadian rapper Drake. Her relationship with Chris Brown, in particular, garnered much media attention due to allegations that Chris Brown used to assault her physically.

She began dating Chris Brown in 2007, and after their relationship ended in February 2009, she entered an on-again-off-again relationship with famous Canadian rapper Drake, which lasted from 2009 to 2016.

Nonetheless, In 2017, Rihanna began dating a Saudi businessman named Hassan Jameel. However, they split in January 2020.

On May 19, 2021, American rapper A$AP Rocky revealed during an interview with GQ that he and Rihanna are in a serious relationship. On January 31, 2022, it was announced that the couple was expecting their first child.

Rihanna is formally a mother! The multi-join invited a child kid with her sweetheart, A$AP Rocky, on May 13. Their child’s name presently can’t seem to be declared. This denotes the main kid for the couple, who were companions for a long time before making their relationship official in 2020.

Rihanna owns a US$14 million penthouse in Manhattan, New York. She also bought a house in West London for about £7 million in June 2018 to be closer to her work with her FENTY fashion label.

In December 2018, she put her Hollywood Hills mansion up for sale after a break-in six months before. The mansion reportedly sold for US$10.4 million.

In August, Forbes disclosed that Rihanna had crossed over into billionaire presence through the success of her sprawling empire, with a net worth of approximately US$1.7 billion.

The report also estimated that the bulk of the singer’s net worth is due to various pursuits outside of music, with her 50% share in the Fenty Beauty brand worth over US$1.4 billion alone.

How to Write a Biography About Yourself