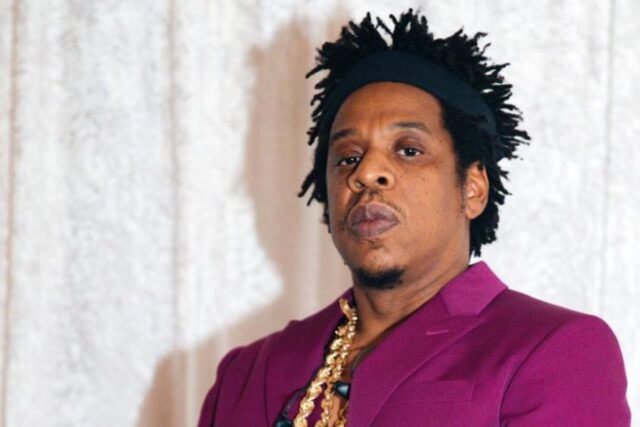 Shawn Corey Carter (born December 4, 1969) is an American rapper, songwriter, music executive and entertainment mogul. The music act who is considered to be one of the most influential figures in Hip Hop is known professionally by the moniker, Jay Z.

He is the former CEO of Def Jam Records, co-founder of Roc-A-Fella Records and president of Roc Nation. The rapper has been credited for the success of a host of American superstars, with who he has worked in the past three decades of his music career.

Jay Z was born on the 4th Of December 1969 to the Black-American family of Adnis Reeves and Gloria Carter. He was named Shawn Corey Carter. He has three siblings: Eric Carter, Andrea Carter, and Michelle Carter.

The music icon has three siblings and was born and raised in Brooklyn, New York City. He and his family resided in Marcy Houses, which was a housing project located in the Bedford-Stuyvesant neighbourhood.

Jay Z‘s father, Adnis Reeves left the family when he was only a boy. Thus, his mother was forced to raise him and his siblings all alone.

Growing up, Jay Z was engaged in a violent lifestyle which was the norm for some Black-American kids at the time. These kids took to crime to survive and take care of their lives. By the time he was 12, he owned a gun and shot his older brother in the shoulder for stealing his jewellery. As a high school student, Jay Z sold cocaine. He was once schoolmates with rappers The Notorious B.I.G, Busta Rhymes and AZ.

Jay Z‘s interest in music was sparked after his mother bought him a boombox for his birthday. He began by writing rap lyrics and freestyling songs whenever he was free. He took up the stage name, Jay Z, which was coined from Jazzy, his nickname at the time.

After leaving elementary school, Jay Z attended Eli Whitney School, Brooklyn. But he couldn’t complete his studies at the institution because the school was closed down.

Then he proceeded to study at George Westinghouse Career and Technical Education High School. He later switched to Trenton Central High School before dropping out.

In 1995, Jay Z released his first official single, In My Lifetime. Since then, the rapper has gone on to build a successful career in the global music industry.

Having co-founded a record label, Roc-A-Fella Records, he released his debut studio album in 1996. The album which is titled Reasonable Doubt was released to critical acclaim and commercial success.

Over the past 25 years, he has released twelve more top-charting albums. Notable mentions are The Blueprint (2001), The Black Album (2003), American Gangster (2007) and 4:44 (2017). He has also worked on two collaborative albums. The first was with Kanye West while the second was with his wife, Beyoncé. The former project is titled Watch The Throne (released in 2011) and the latter is Everything Love (released in 2018).

Jay Z‘s is one of the bestselling artists in American music history. He has sold over 125 million records, headlined and co-headlined sold-out shows, and won 24 Grammy Awards. He ties with Kanye West on the most Grammy Awards to have been won by a rapper.

Besides being voted as one of the most influential figures in the music industry, Jay Z is a successful music executive and entrepreneur. He is credited for contributing to the commercial success of artists like Kanye West, J. Cole and Rihanna. This was made possible during his time as CEO of Def Jam Records.

One of the few Black-American billionaires in the music space, Jay Z is the founder of Roc Nation, an entertainment company with many subsidiary firms. He is the founder of the clothing company, Rocawear and the luxury sports bar, 40/40 Club. He bought the tech firm, Aspiro in 2015 and is in charge of managing Tidal, the media streaming arm of the company.

Jay Z is married to singer and actress, Beyoncé. The couple had collaborated as artists as far back as 2002. They exchanged vows at a private wedding ceremony on the 4th Of April 2008. They live in the Bel-Air neighbourhood of Los Angeles and reside in a home valued at US$88 million.

The couple has three children. Their first child, a daughter, was born on the 7th Of January 2012. She is named Blue Ivy Carter.

In 2016, Beyoncé had her second pregnancy and delivered twins on the 28th Of June 2017. The twins are a daughter named Rumi Carter and a son named Sir Carter.

Jay Z published a memoir titled, Decoded in 2010. He co-founded the Shawn Carter Foundation with his mother in 2006. The foundation has been responsible for executing Jay-Z‘s philanthropic acts such as helping students from disadvantaged socio-economic backgrounds and proving relief to victims of natural disasters.

The music icon has made a fortune off his music career and business investments.

Jay Z‘s net worth is estimated to be worth US$1.5 billion to US$3 billion.