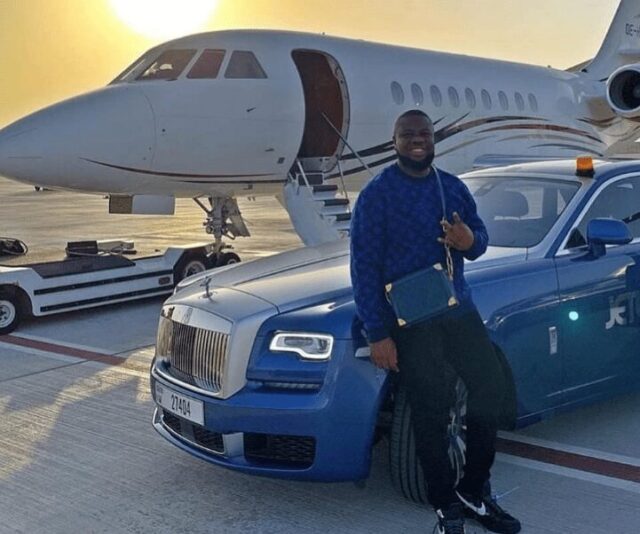 HushPuppi is a Nigerian entrepreneur and philanthropist based in Dubai after leaving Malaysia.

He loves to send positive messages on his Instagram about his life and philanthropy works.

Hushpuppi was born and raised in Lagos state Nigeria, whose parents are of the Yoruba ethnic group in Africa.

His father and mother were taxi drivers and bread sellers, respectively.

As a child whose parents are taxi drivers and bread sellers, he must have experienced the bustling and hustle of the city of Lagos.

The every day to day hocking at the bus station, train station, traffic hold up and so on.

He was also a second-hand clothes seller in Lagos after an extensive interview with his neighbors.

Growing up in Lagos, Hushpuppi must have attended public school for his primary and secondary education.

For as the famous Nigerian saying goes, “man gat make that money and chop life”, he later emigrates to Malaysia in search of greener pastures.

Internet celebrity, Hushpuppi became successful and wealthy after he moved to Malaysia. His luxurious lifestyle and wealth made him famous and a star on Instagram. His post has to do with fancy cars, private jets, picture and elite clubs, clothes by the most fashionable brands like Gucci.

He was remade by the title of “The Nigerian dark horse” by the people who love him on social media. Today, he is one of the most famous Nigerian diasporas with a global following of over 2.5 million followers on Instagram.

How exactly he made his money is a mystery to everyone. The media can only say that a new pape in his life opened when he decided to relocate to Malaysia.

Hushpuppi describes himself as a real estate developer. How he makes money to afford his posh lifestyle has not been fully disclosed. He once joked that he is a beggar by profession. The source of Hushpuppi‘s wealth is a bit of a mystery, but many believe he has invested in property and other lucrative businesses.

Hushpuppi‘s wealth drew the attention of crime fighters, EFCC. Investigations on how he come about the wealth lead to his arrest. The masses identified no legal source to which his wealth come to be.

After much research, Hushpuppi was arrested in the United States and was charged with conspiracy to launder money obtained from business email compromise frauds and other scams, including schemes that defrauded a U.S. law firm.

Human rights activist, Deji Adeyanju, made headlines in 2018 demanding that the EFFC investigate Hushpuppi. He accused Hushpuppi of being a “yahoo boy” – a term given to men who carry out online crimes such as the famous 419 scam.

“I want to commend EFCC for this good job. However, more work needs to be done in this regard. There are more yahoo boys in Abuja. And another reminder. There’s this guy called Hush Puppy or something like that. Look into it,”

The FBI was also the backbone of his arrest, after which all investigations indicated all his transnational cybercrime.

With all the investigations of the crime fighters EFCC and FBI, Gal Pissetzky (Hushpuppi‘s lawyer ), stated that his client, gets all his wealth legally from designer brands who, through the influence of Ray on social get to promote their brands.

Mr. Pissetzky told the BBC that There was no extradition, there were no legal steps taken, the FBI filed no court documents, it was simply a call to the FBI.

Every vibrant person would like to have vast sums of money and living a luxurious life like Hushpuppi. He is well known for his expensive cars, branded clothes, and accessories all over his Instagram page.

He spends a significant amount of money on financing his lavish life. When asked, he says he is a ‘professional beggar.

Hushpuppi pays no attention to the many claims that his vast wealth comes from his fraudulent acts on the internet,
Of resent on social media, Hushpuppi took up a fight with Nigeria hip-hop artists, which includes; Kcee, Davido, and Phyno.

During the fight, Hushpuppi wrote on his Instagram handle claiming some artists wants to receive his handshake and his greetings.

During the same fight, KCEE wrote a fire-back to Hushpuppi out of anger.

Hushpuppi can be found on his Instagram page @Hushpuppi.

Prior to his arrest and extradiction, Hushpuppi was dating Amirah Dyme; a model who also lives in Dubai.

To date, the exact net worth of Hushpuppi is unknown.

However, he is likely worth hundreds of millions of naira from the expensive purchases he flaunts on social media (Instagram) and is also known to be a social media influencer.

According to social media rumors, Hushpuppi had garnered an estimated net worth of $4 billion before his arrest.