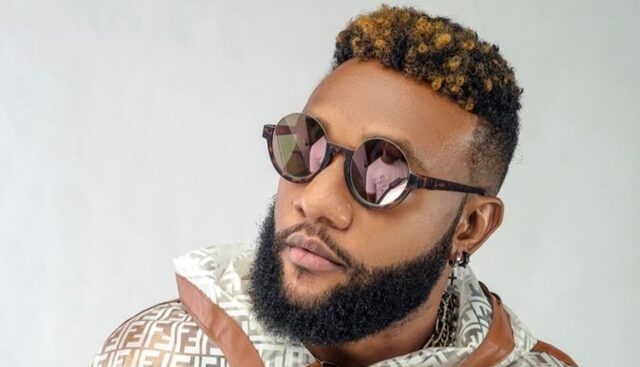 Kingsley Chinwieke Okonkwo (born 18 April 1979), who is better known by the stage name, Kcee, is a 43 years old successful Nigerian singer and songwriter.

The Southeast bred artist who has been in the industry for almost two decades became famous for his hit songs, Limpopo and Pull Over.

He was formerly a part of the music duo, Kcee Presh.

Kcee is signed to Five Star Entertainment and serves as one of its top executives. He is the elder brother of the business magnate, E-Money.

Kcee was born to the family of Chief Okonkwo and Mrs Okonkwo of Amapatu village in South-East Nigeria. His hometown is Uli, located in Ihiala Local Government Area in Anambra State. He was born on April 18, 1979, and given the name, Kingsley Chinwieke.

Kcee was raised in a Christian household, as his parents were adherent to the Catholic faith. So, he and his siblings attended church mass regularly. In addition, he comes from an industrious family which places equal value on both education and entrepreneurship.

He spent his formative years in Anambra State before moving to Lagos, the country’s commercial hub, in search of greener pastures. One of the reasons he moved to Lagos was to achieve his dream of becoming a music star.

Kcee has a younger brother named Emeka, who is widely known by the nickname E-Money. The latter has supported Kcee‘s career goals and provided funds used to launch his solo music career.

He had good grades in his First School Leaving Certificate and West African School Certificate, respectively.

While Kcee was in the choir, he developed a friendship with Hajie, who was also interested in making mainstream music. Together, they formed a Hip-hop group known as KC Presh. The duo contested for the Star Quest TV reality show and won. This was the start of great things for Kcee and his friend. Winning the show brought opportunities their way in the industry as they launched their music careers.

Together, they released some hit singles, which helped them receive invitations to perform at shows and concerts. However, after some time, both artists decided to go their separate ways and launch solo careers.

Kcee took the industry by storm when he released the top-charting single, Limpopo, in 2012. The song was a commercial success and helped put Kcee in the spotlight. He was nominated for awards because of the single.

The song was produced by one of the industry’s finest producers, Del B. For his work with Limpopo, he won the Song Of The Year at the 2013 The Headies Awards.

He complimented the success with the hit song, Pull Over. The Wizkid featured single received massive airplay on radio stations and TV stations across the world. In addition, it was voted as one of the top ten club jams for that year.

The talented singer, Kcee released his debut studio album, Takeover, in 2013. The album sold thousands of units across the globe. Four years, he dropped his second project, Attention To Detail. In 2020, he released the song, Sweet Mary J, which was his first single for the year.

Kcee won the Hip Hop World Revelation Of The Year award at the 2014 The Headies Awards. That same year he was nominated for the Best R&B/Pop Album and Artiste Of The Year categories at the award show.

Kcee posts pictures of his luxurious lifestyle on his social media pages. He also used the platform to promote his work and interact with his fans.

Unlike some celebrities, Kcee has achieved success both in his career and marriage life. He is happily married to Ijeoma Okonkwo with three children, namely; Kwemtochukwu Okonkwo, Kanye Okonkwo, Somto Okonkwo. In addition, he clocked 43 years old this year. When he turned a year older, his family and close friends had hosted him to a lavish birthday celebration.

Kcee owns several choice properties across Nigeria and Europe. His primary residence is located in a highbrow estate in Victoria Island, and he has a fleet of cars in his garage.

In 2013, Kcee signed a multimillionaire deal with telecommunications giant MTN to be one of their ambassadors. He was appointed a Peace Ambassador Of Nigeria by the former first lady, Dame Patience Jonathan.

He signed a deal with the brand Magnum in 2015. That same year, he signed a new deal with MTN.

Since he became a superstar, Kcee has been making a lot of money from his music career.

He has also diversified his income flow by investing in different sectors. This has helped him amass a lot of wealth.

Presently, Kcee has an estimated net worth of US$5-US$10 million.