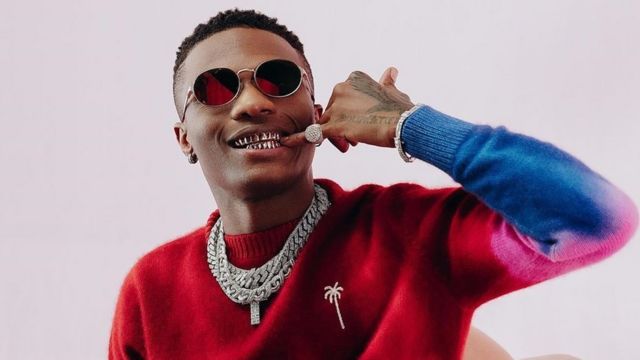 Ayodeji Ibrahim Balogun (born July 16, 1990) is a Nigerian music Megastar. He is known professional as Wizkid or Starboy, or Big Wiz. He came to the limelight after signing to Empire Mates Entertainment (E.M.E) in 2009 and releasing his hit single, Holla At Your Boy.

The song which won him millions of fans set the pace for Wizkid to drop commercially successful albums in the past twelve years. His latest album, Made In Lagos, has won him international acclaim as it reached number one on the Billboard World Album Chart.

One of the album’s singles, Essence featuring Tems, has become the first Nigerian song to chart on the Billboard Hot 100. In addition, it was announced in February 2021 that Wizkid has attained the honor of being the most-streamed Nigerian artist on Spotify, amassing over 3.4 billion streams from all his works.

Ayodeji Ibrahim Balogun, who became popularized professionally with Wizkid is a 31 years old Nigerian singer, rapper, and songwriter whose present in the Nigerian industry is classified as a blessing.

Wizkid was born into a polygamous family on the 16th Of July 1990. He hails from the Yoruba tribe and was named Ayodeji Ibrahim Balogun by his parents. His father is a Muslim, while his mom adheres to the Christian faith and attends a Pentecostal church in Nigeria.

He was born and bred in the Ojuelegba district of Surulere. Although born in Lagos State, He is a native of Ogun State. He grew up as the only son among twelve siblings, who are all females. His father, Mr. Balogun, married three wives. Despite being a polygamous family, the Baloguns lived in peace and harmony. And this gave room for Wizkid to pursue his music dreams without having to deal with family issues.

Wizkid‘s foray into music started at the young age of eleven when he formed a music group, Glorious Five, with his friends. These friends were his church members. Together, the group released a collaborative album before disbanding. Wizkid‘s initial stage name was Lil Prinz, and he switched to his present moniker in 2006.

As Wizkid advanced in years, he began meeting some big names in the music industry. He first met an ace music producer, OJB Jezreel, who advised him not to record any music for a year but focus instead on improving his songwriting ability. During this period, he paid a regular visit to OJB Jezreel‘s studio, which was located in his neighborhood, Ojuelegba. And this gave him the opportunity to watch artists like 2baba and Sound Sultan records songs.

He later came in contact with rapper, Naeto C, who he credits for being one of his mentors in the industry. Success finally fell on Wizkid‘s laps when his path crossed with Banky W, a singer, talent manager, and CEO of E.M.E Records. Banky W was taken to Wizkid immediately and began working with the younger artiste to refine his sound. As a result, Wizkid signed a record deal with E.M.E records in 2009.

The Baloguns spared no expense in giving their son a quality education. Wizkid attended top private schools in Surulere for his primary and secondary school education.

After obtaining his West African School Certificate, he gained admission into Lagos State University. After that, however, he dropped out of the university.

Thereafter, he enrolled at Lead City University, Ibadan, to further his studies. But he left the institution after completing two sessions.

After he was signed to E.M.E records, Wizkid began working on his debut album, Superstar. The album, which is a mix of Afrobeats, R&B, and Reggae sounds, saw Wizkid work with talented producers such as Masterkraft, Samklef, Shizzi, Jay Sleek, and Q-Beats.

He released the first and lead single of the project in January 2010. The song titled Holla At Your Boy thrust Wizkid into the national limelight and made him the favorite artiste of many young Nigerians. In addition, the song is credited for helping him win the Next Rated Artiste award at The Headies 2011.

Wizkid released the second single of the album, Tease Me/Bad Guys, in April 2020. Like his first work, this song was also a commercial success. And the single was followed by Don’t Dull, which became the club jam and party song during the December Festive season. Superstar was released to critical acclaim on the 12th Of June 2011, and its launch party was held at Eko Hotel and Suites. The album secured a nomination for Album Of The Year at The Headies 2012.

In 2012, Wizkid worked with his label mates, Shaydee, Niyola, Skales, and Banky W, on the collaborative album: Empire Mates State Of The Mind. Upon the album’s release, he and other E.M.E acts toured the United States, performing at over two dozen cities.

After two years of working hard in the studio, he released his sophomore album, Ayo, which also did great numbers commercially. The album’s lead single, Jaiye Jaiye, was released on the 2nd of May, 2013. He featured music icon, Femi Kuti on the song. The second single of the album, On Top Your Matter, was dropped on the 26th Of October 2013. Again, he collaborated with ace producer, Del B on the song.

After the expiration of his five-year contract with E.M.E records, he chose not to renew his contract and left the label. Instead, he decided to set up his own music outfit, which he called Starboy Entertainment. Prior to leaving E.M.E, there had been speculations that Wizkid was having issues with the management due to the terms of agreement of his contract. And this was the reason given for his leaving the E.M.E mansion into his own house in February 2013. On the formation of Starboy Entertainment, he signed recording artists, Legendury Beatz and Maleek Berry to the label.

In January 2015, Wizkid released Ojuelegba, which spoke about his struggles during the early years of his career. After being featured on Drake‘s single, One Dance, he became the first Nigerian artist to be listed on Billboard Twitter’s Last 24 Hours chart. By May, the song had reached the Billboard Hot 100 chart earning Wizkid more accolades. Furthermore, due to his contribution to One Dance, he became the first Afrobeats artist to appear in the 2018 Guinness World Records.

He signed a record deal with the international music label, RCA Records in March 2017. Four months after, he released his third studio album titled Sounds From The Other Side. The album saw Wizkid collaborate with big names like Drake, Chris Brown, Sarz, Spellz, Del B, Major Lazer, Ty Dolla Sign, Efya, and DJ Mustard. Before the album’s release, he had released three hit singles; Daddy Yo, Sweet Love, and Come Closer.

In 2019, he was contacted by American diva, Beyonce and invited to work with her on the album: The Lion King: The Gift. As a result, he lent his vocals to the chart-topping song, Brown Skin Girl. The song helped him win his first Grammy Award for Best Music Video. Also, it earned him nominations at the BET Awards, NACCP Image Awards, and Soul Train Music Awards.

On the 30th Of October 2020, Wizkid released his fourth studio album titled, Made In Lagos. In 2021, Essence, one of the album’s singles, became the first Nigerian song to chart on the Billboard Hot 100. The album has also amassed millions of streams, positioning him for many nominations. Due to the success of Essence, Justin Bieber reached out to Wizkid to work on a remix.

The Legendary Nigerian singer, Wizkid was formerly signed by Banky W to Empire Mate Entertainment (EME) in 2009 and rose to fame with “Holla At Your Boy,” a single off his Superstar Album. He left the label EME due to contract differences and started his own record label StarBoy.

In 2013, Wizkid became the first Nigerian artist to have one million followers on Twitter.

Wizkid is often considered as one of Africa’s top three artists. The others being Burna Boy and Davido. He also has the most substantial fanbase in Nigeria, who identify themselves as Wizkid FC. Wizkid is also known by the nicknames, Starboy or Big Wiz or Big W.

The Lagos-born singer is 31 years old. Although he is yet to be married, he has three sons from different women. His first child, Boluwatife, was born in 2011. He was just 21 years old at the time. He dotes on his children a lot and spends his free time vacationing with them or taking them out to lovely places.

He is currently rumored to be dating his manager, Jada P, who happens to be the mother of his third son, Zion Balogun. He also has another manager named Sunday Are. In addition, he announced the signing of singer, Terri, in 2018.

The singer, who is known for his iconic fashion style, has choice properties across the world. Presently, he spends his time between his houses in Lagos and Ghana.

Wizkid is a father of three;

All three mentioned above are his baby mamas and ex-girlfriends except Jada Pollock. Wizkid has also dated Tonto Dikeh, Tiwa Savage, and Seyi Shay in the past.

As one of Africa’s most significant artists and music executives, Wizkid is a very wealthy man. He earns a lot of royalties from his songs and makes money from organizing shows and performing at shows across the world.

Wizkid‘s net worth is estimated to be worth US30 million.

Wizkid’s official international recognition came in 2016 when Drake collaborated with him on “One Dance,” a chart-topping single in several countries including the United States, for which he is credited to be the writer. He also went ahead to feature Drake in Come Closer.

PS: Wizkid has an upcoming Album Made In Lagos dropping on the 15th of October 2020, the Album release was halted due to the End SARS protest in Nigeria. Other albums and projects by Wizkid are;