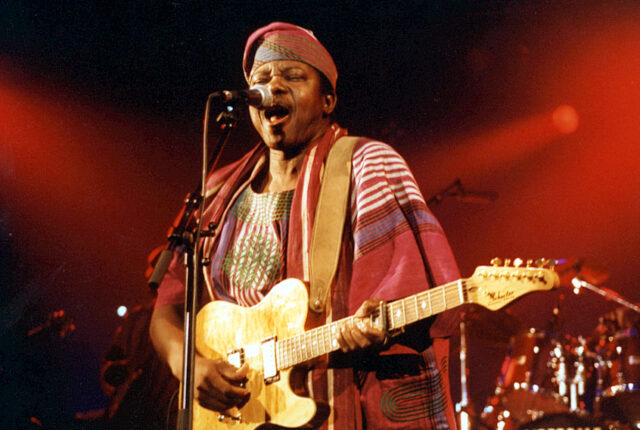 Chief Sunday Adeniyi Adegeye MFR (born 22 September 1946), known globally as King Sunny Adé, is a Nigerian jùjú singer, songwriter, and multi-instrumentalist. He is regarded as one of the first African pop musicians to gain international success and has been called one of the most influential musicians of all time.

King Sunny Adé formed his own backing band in 1967, eventually known as his African Beats. After achieving national success in Nigeria during the 1970s and founding his own independent label, Sunny Alade.

King Sunny Adé signed to Island Records in 1982 and achieved international success with the albums Juju Music (1982) and Synchro System (1983); the latter garnered him a Grammy nomination, a first for a Nigerian artist.

King Sunny Adé was born in Osogbo to a Nigerian royal family from Ondo and Akure, thereby making him an Omoba of the Yoruba people. Born 22 September 1946, his father, Samuel Adeniyi Adegeye was a church organist, while his mother, Maria Adegeye (née Adesida), was a trader.

King Sunny Adé is currently 76 years old and still alive. He celebrates his birthday on every September 22nd.

As a member of the Adesida dynasty, his mother’s relatives included her father, Oba Adesida I (who ruled Akure for 60 years). Later, they would have her nephew and King Sunny Adé‘s cousin, Oba Adebiyi Adegboye Adesida Afunbiowo II, who also served as King of Akure.

King Sunny Ade attended a grammar school in Ondo but later dropped out after a few years to join the Lagos-based highlife band, Federal Rhythm Dandies.

Famed for his classic guitar touches and dancing steps, King Sunny Adé has embarked on several tours within Africa, Europe, and America. He released his debut album titled “Juju Music” in 1982 under Island Records, while his second album titled: “Syncro System” was released a year later. The latter earned him his first Grammy Award nomination, while “Odu”, which he released in 1988, made him his second Grammy Award nomination.

As it is familiar with a few Yoruba artists, the Afropop star’s music is characterized by instruments like the guitar, vibraphone, clavinet, talking drum, tenor guitar,  and dignitaries’ praises which most times, records the oral tradition of the Yoruba tribe. He collaborated with notable stars like Steve Wonder, Bola Abimbola, Wasiu Alabi Pasuma, and Manu Dibango.

Besides his illustrious musical career, King Sunny Ade has a nightclub, a studio for budding musicians, a performing arts center, and a foundation. He also lectures at the Obafemi Awolowo University, Ile- Ife.

A recipient of the national honor of Member of the Order of the Federal Republic, King Sunny Ade was rewarded for his immense contribution to world industry at the International Reggae and World Music Awards in 2008 and was also inducted into the Afropop Hall of Fame at the Brooklyn African Festival in the U.S in July 2009.

His music has featured in a handful of Hollywood movies. In 1983, his song played in the film “Breathless” and the 1986 comedy series “One More Saturday Night”. He was appointed a ‘change’ ambassador in March 2017 by Nigerian minister Lai Mohammed.

The chairman, King Sunny Adé’s marital relationship has always been a subject of interest in Nigeria. Considering the fact he is successful and handsome, many believe he has all it takes to win ladies’ hearts.

Currently, the Juju maestro has seven women in his life. Though he got married to each of them is not detailed online, one extraordinary thing about King Sunny Adé’s relationship with them is that he loves them equally and seems to be very fond of them.

The singer left many tongues wagging on social media in January 2018 when he shared a photo of his seven wives, causing many online users to believe he is still in the age-long culture of polygamy. Also attached to the picture was a short message that read: “My Women Crush Wednesday,” a photo of himself looking very excited.

King Sunny Adé has received numerous awards during his career. In November 2016, he became a recipient of the AFRIMA award. In December 2016, he was inducted into the Hard Rock Cafe hall of fame.

Holding a position in the Nigerian music industry and becoming a legendary figure has been a talked-about point for the musician. With this, King Sunny Ade has an estimated net worth of US$55 million.