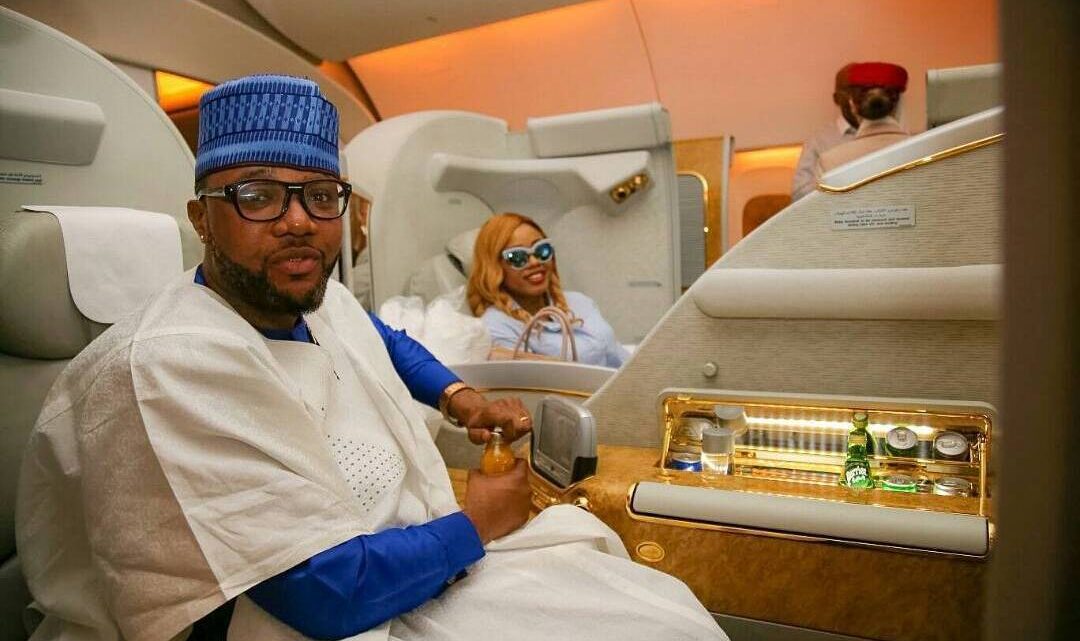 His source of wealth is comprised of his numerous investments and businesses which include a shipping company based in Lagos, his investments in Union Bank Nigeria Plc.

He also has unnamed real estate ventures, as well as other financial keyholes off the shores of the country.

He is married to Juliet Okonkwo and currently has an estimated net worth of $30,000,000.

E-Money possesses a good number of expensive cars and resides in his gold-furnished mansion worth N250,000,000 in Ikeja, Lagos State.

E-Money‘s wealth started with the acquisition of a $2 million dollar contract. However, the slum boy paid his dues while growing up.

Born originally as Emeka Okonkwo on the 18th of February 1981, E-Money was raised alongside his elder brother; also known as the Limpopo master, Kcee (Kingsley Chinweike Okonkwo).

He was raised in the rough neighborhood of Ajegunle in Lagos State. His dad who was a popular disc jockey in the ghetto area worked tirelessly alongside his mum to provide daily meals for the boys.

According to the Nigerian business mogul, his dad never wanted him or Kcee to venture into music, claiming that the industry was unprofitable, except for those with enough resources.

Emeka Okonkwo a.k.a E-Money recently admitted how he learned a lot from his childhood days in the slums of Lagos, which spurred him and his brother to work hard for a better future.

E-Money attended Ajegunle Primary School alongside his brother Kcee before enrolling in a secondary school situated close to their family house.

All through his time at school, he was never well-to-do and engaged in menial jobs to support his parents at the time. At the completion of his secondary education, he moved away from Lagos to study elsewhere and honed his inherent skills to survive.

With a large business empire that covers both the Shipping industry and the Music industry, the ‘money man’ has truly moved from grass to grace within a decade. He got his nickname, E-Money due to his extravagant manner of spraying cash at public occasions and his level of generosity to both family and non-family members alike.

E-Money is currently the CEO of the Five Star Music record label which has sponsored famous music artists such as Harrysong, Skiibii, and KCEE in recent times. He also owns a shipping company, called Emy Cargo and Shipping Nigerian Limited, which is based in Lagos State, Nigeria.

His other business ventures include multiple investments in real estate, Oil and Gas, as well as Union Bank of Nigeria PLC.

Due to his jaw-dropping display of luxury, many still believe his source of wealth covers more, and true to it, some sources claim that the multi-billionaire also owns more businesses and investments outside the country.

E-Money is currently married to Juliet Okonkwo and is a father to three sons. They all reside in the United Kingdom.

According to him, he met his wife far back as 2003, in their second year in the University, starting off as friends before they tied the knot in 2010; in a traditional wedding held at their hometown. Things were so difficult at the time that Kcee; his elder brother, had to borrow some money for t-fare to the city.

It was during that trip he got a call for a contract of $2 million awarded to him.

Recently, he purchased a Mercedes Benz G Wagon worth N20,000,000 for his brother, Kcee as a birthday gift.

E-Money currently possesses multiple streams of income due to the number of investments tied to his name. His net worth; which is currently estimated at $30,000,000 is accrued from his current financial power.