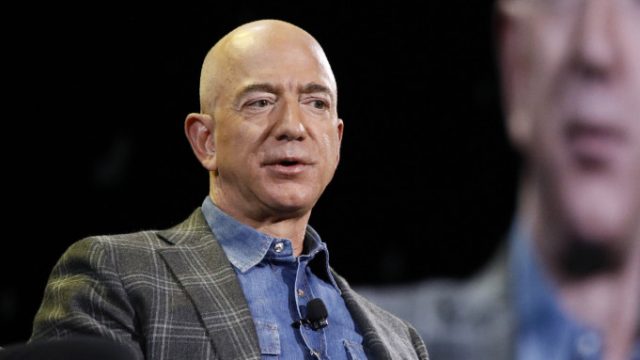 Jeff Bezos is the founder and the CEO of a multi-national company named AMAZON.

He is blessed with a net worth of more than $200 billion as of May 2021. Jeff Bezos is the richest man in the world according to Forbes and different researches.

When Jeff Bezos was birthed, his mother was a 17 years old high school girl. While raising up of Jeffrey, his mother (Jacklyn) attended a night school.

Jeffrey’s mother divorced his father and married Mike Bezos in 1968. Shortly after getting married to Mike, Jeffrey’s surname was changed to Bezos.

Jeff Bezos displayed scientific interests and technological proficiency, and once rigged an electric alarm to keep his younger siblings out of his room.

From then, he displayed his career on different occasions.

His family moved to Miami, Florida where he attended Miami Palmetto High School. He attended the student science training program at the University of Florida and graduated as the National Merit Scholar

After Jeff Bezos graduated from college in 1986, he was offered jobs at Intel, Bell Labs, and Andersen Consulting, among others.

He had the opportunity to first of all work at Fitel, a fintech telecommunications start-up, where he was entitled with building a network for international business transactions.

Due to his efficiency in the given field, he was promoted to head of development and director of customer service immediately. He underwent into the banking industry when he was a product manager at Bankers Trust, supplying his service from 1988 to 1990.

In the hunt to become a greater somebody, he joined D.E Shaw & Co, which happened to be one of the freshly founded hedge funds as strong mathematical modeling. The scenario took place in 1990 and he was working with them till 1994.

Since Jeff Bezos was a dream-filled man who was always focused on achieving his feat, he was realized to be one of the most respectable which led to him being made the Vice President of the renowned company. He was just 30 years of age when he attended this feat.

Jeff Bezos who happened to be a source of inspiration for youth and different businessmen has one of the most followers on Instagram. He has over 2.8 million followers.

Jeff is fully called Jeffrey but shorten by his friend back then. Jeff Bezos who happens to be the richest man has gone through a lot concerning his career building and self-discovery. His background was somehow rough like jumping from one parent to another and locations.

During his high school, Jeff Bezos once worked with MacDonald as a Short-order line cook for the breakfast shift.

On Bezos valedictory service he gave a speech” I dreamt of a day when mankind colonizes space. “

In March 2003, Bezos was one of three passengers in a helicopter that crashed in West Texas after the craft’s tail boom hit a tree. Bezos sustained minor injuries and was discharged from a local hospital the same day.

Jeff Bezos was married to MacKenzie Scott. He has four children.

The world-renowned wealthy businessman, Jeff Bezos’ net worth has once reach $200 billion as of May 2021 but currently dropped to $186.8 billion.