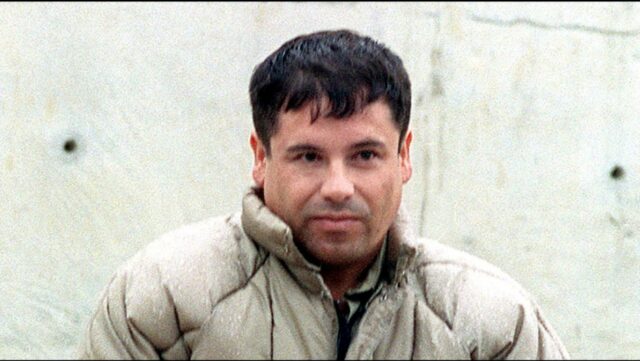 El Chapo is widely considered the most powerful drug trafficker globally and the most significant drug lord of all time.

He has successfully smuggled multi-ton cocaine shipments from Colombia through Mexico to the United States by air, sea, and road.

Joaquín ‘El Chapo’ Guzmán was born in Sinaloa, Mexico, and raised in a poor agricultural family.

It is reported that he endured physical abuse at the hands of his father and also entered the drug trade through his father, helping him grow marijuana for local dealers during his teens days.

As a child, he sold oranges and dropped out of school in third grade to work with his father in drug dealing activities.

When he was a teenager, his father kicked him out of the house, and he went to live with his grandfather. It was during his adolescence that Joaquín “El Chapo” Guzmán gained the nickname “El Chapo,” Mexican slang for “shorty,” for his 1.68 meters (5 ft 6 in) stature and stocky physique.

Joaquín ‘El Chapo’ Guzmán oversaw operations whereby mass cocaine, methamphetamine, marijuana, and heroin were produced, smuggled into, and distributed throughout the United States and Europe, the world’s most significant users.

He is the highest exporter of drugs to the United States, and this made Forbes rank him as one of the most influential people in the world between 2009 and 2013.

He was first in 1993 in Guatemala and was extradited and sentenced to 20 years in prison in Mexico for murder and drug trafficking. However, he bribed correctional officers and escaped from a federal maximum-security prison in 2001.

Joaquín ‘El Chapo’ Guzmán was apprehended in Mexico in 2014, but he escaped before formal sentencing in 2015 through a tunnel dug by associates into his jail cell. But finally, the Mexican authorities recaptured him following a shoot-out in 2016 and extradited him to the U.S. a year later.

In 2019, he was found guilty of several criminal charges related to his leadership of the Sinaloa Cartel, was sentenced to life imprisonment, and was incarcerated in ADX Florence, Colorado, US.

At the time of his arrest, Joaquín ‘El Chapo’ Guzmán was the wealthiest and most powerful of Mexico’s drug cartels. It smuggles multi-ton cocaine shipments from Colombia through Mexico to the United States by air, sea, and road.

Despite being in prison, the Drug lord, Joaquín ‘El Chapo’ Guzmán still maintains his Instagram page by posting many of his pictures. He has close to 65K followers on Instagram.

Joaquín ‘El Chapo’ Guzmán is from a drug trafficking family. Many family members, including his brother, one of his sons, and a nephew, were killed by Sinaloa’s archrival cartels, Los Zetas, and the Beltrán Leyva Organization when dealing with drugs.

Rated as one of the the smartest and wealthiest drug dealer in the world alongside Pablo Escobar, the drug lord, Joaquín ‘El Chapo’ Guzmán‘s net worth is over $3 Billion.