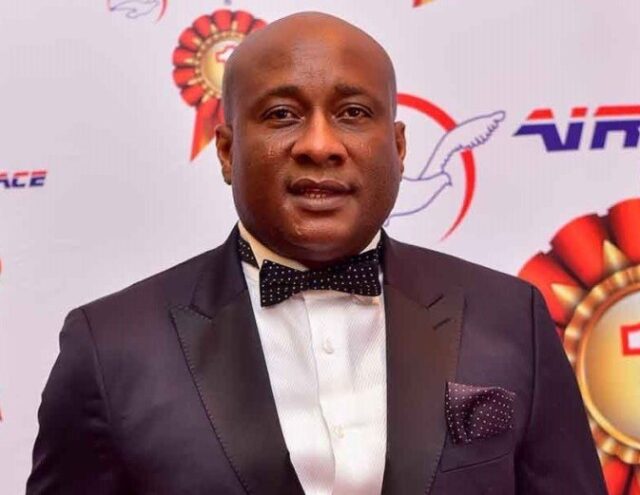 He was born in 1964 in the Niger Delta Region, before moving westwards to pursue his passion.

He is the founder of Air Peace and the Chairman of the Foundation For Ethnic Harmony In Nigeria (FEHN). He made headlines in 2019 after offering his airplane to convey Nigerians in South Africa during the Xenophobia attacks.

Allen Onyema was born on the 28th of March 1964 in the Niger Delta Region of Nigeria.

He hails from the Igbo-speaking part of the country; a town called Mbosi, in the Ihiala Local Government Area of Anambra State.

He was raised alongside his eight siblings and was also the firstborn.

Allen Onyema lost his mum in 1991 to kidney failure. His formative years were spent in the Benin-Warri axis before he moved westwards for schooling and greener pastures.

After obtaining his Higher School Certificate from Government College in 1984, he got direct admission to the University of Ibadan, where he studied Law. Three years later, he joined the Nigerian Law School before being called to bar a year later.

He also holds a level-three certification in Nonviolence education from the University of Rhode Island.

Allen Onyema moved to Lagos in 1990 after the completion of his undergraduate studies. However, his parents were never in support of his decision to head westward while his uncle, Capt. J.O.W. Onyema; who was a master marina, had also wanted him to work at Shell: an Oil and Gas Company.

He squatted at Oshodi, in Lagos State and moved to Lagos Island by rail in his early days as a Lawyer. Eventually, he met late Chief Vincent Amobi Nwizugbo, who employed his services at his chambers in Martins Street, Lagos Island.

After winning his first case in court, Allen Onyema was rewarded with a monthly salary of N500 at the time.

A few years later, he joined the real estate business and thrived so much that he decided to call it quits with some of his other endeavors, including the law firm where he was highly regarded.

During his time at the University of Ibadan, Allen Onyema traveled with nine other students to resolve a religious and ethnic riot in Zaria.

He later established the Eminent Friends’ Group – with the singular aim of ensuring unity amongst Nigeria’s diverse ethnic nationalities and eliminate violence from the country.

This set the pace for a chain of other humanitarian actions Allen Onyema has taken to date.

Presently, the organization is known as Foundation For Ethnic Harmony In Nigeria (FEHN), headed by Allen Onyema.

Allen Onyema founded Air Peace in 2013, after resigning from a law firm and establishing his own firm and an import trade outfit known as Continental Business Links Ltd.

Prior to the airline’s establishment, Allen Onyema was financially rooted in the previous years.

He eventually purchased planes and employed the services of qualified personnel to run Air Peace; currently one of the successful airlines in Nigeria.

Recently, Allen Onyema made headlines after offering to send an airplane to convey Nigerians to South Africa during the Xenophobia attacks many months back.

Aged 26, Allen Onyema got married to his betrothed in 1993. His wife is from the Igala-speaking part of Kogi State. Allen Onyema’s wife is known as Alice Ojochide Onyema.

Their union is blessed with three boys and a girl.