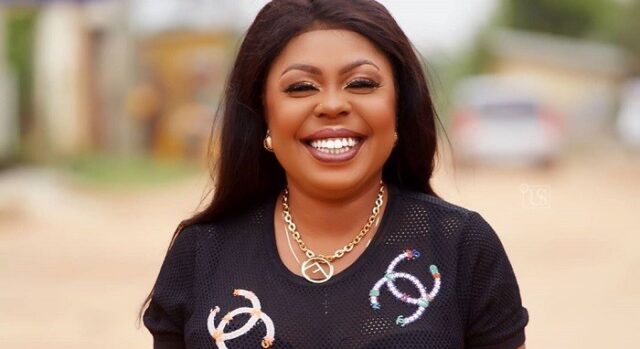 She currently owns a popular channel on YouTube – Schwar TV and is a Philanthropist with a keen interest to help the needy.

On the 14th of February, 1982, Valentina Nana Agyeiwaa a.k.a Afia Schwarzenegger, was born to Augustine and Grace Aciaa Agyei.

She is an Ashanti Native and grew up in her hometown; the suburbs of Krofrom in Kumasi, Ghana. She later moved to Johannesburg in her late childhood years.

Her schooling years was once tagged as ‘illustrious’ due to her stint at multiple educational institutions. She received a basic education at Ridge Experimental School and joined Seventh Day Adventist School in Tamale; the northern region of Ghana.

Now a popular figure in West Africa, Afia Schwarzenegger started off as a host on Okay FM radio station for the morning show – Yewo Krom, UTV Ghana’s Kokooko Show and has also worked with Happy FM, Kasapa FM and TV Africa in Ghana.

She attained stardom after featuring in a TV series titled Afia Schwarzenegger; produced by Deloris Frimpong Manso. She also worked as a flight attendant in South Africa for a very brief spell.

Afia is currently the CEO of a YouTube media outfit – Schwar TV and the host of The Breakfast Show. She is also the ambassador of Orphans in Ghana after her appointment by the Association of Children Homes and Orphanages in Ghana.

She founded the Leave2Live Foundation – a medium she has used to support victims of domestic violence. She also owns a non-profit organization called Owontaa Street Ministry; aimed at feeding the less privileged in Ghana.

Her first marriage was to a Pastor named Godson Yaw Boakye in the UK but didn’t last long after rumors of his previous marriage surfaced.

Afterwards, she got married to a South African before parting ways to tie the knot for the third time to Lawrence Abrokwah.

Afia‘s time with her third husband was also short-lived after he deemed her unfaithful.

Her two sons John and James Geilling were born to a German before she got married; while her daughter, Pena, was born to her third husband.

Afia‘s personal life has been marred with countless controversies that have seen her ‘lock horns’ with Kennedy Agyapon– a Parliament member, Lawrence Abrokwah– her third husband, Bishop Obinim– a Ghanaian Pastor and also John Dumelo on social media.

In 2015, she got arrested for beating up a man who stole her iPhone.