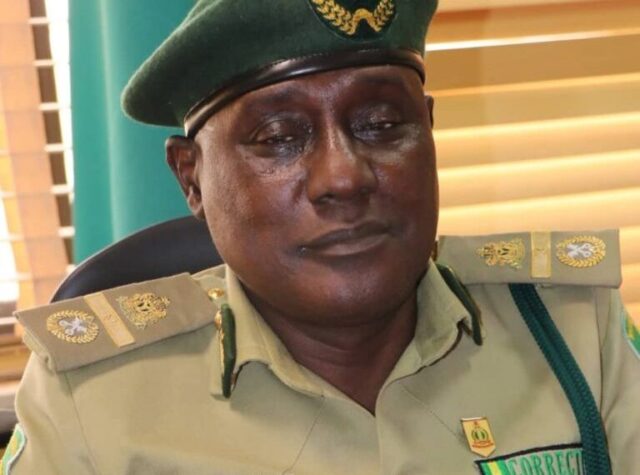 He hails from Sokoto State, Nigeria.

Haliru Nababa has been in the correctional service since 1990, which makes him the most experienced agent in the paramilitary unit.

Haliru Nababa was born in Sokoto in 1964, was born into a family of a staunch Muslim.

He is the first son of his parents. With the supports of his parents, Haliru Nababa was able to attend the best primary and secondary school in town, which can be said to have given him an edge over his peers.

Haliru Nababa had his primary education at Demonstration Primary School. He obtained his primary school leaving certificate in 1975 before he proceeded to the Government Secondary School, Tangaza, where he received his West African School Certificate for 1980.

In the quest to further his study, he gained admission to Usmanu Danfodiyo University, in Sokoto, and he graduated with a bachelor’s degree in history.

After that, he continues his education by obtaining a Diploma in Criminology from 1988 and 1996.

Haliru Nababa joined the correctional service, formerly known as Nigerian Prisons Service (NPS), in 1990 as Assistant Superintendent of Prisons and began to move through different till he reached the rank of Assistant Controller General of Corrections for 2018.

A position he occupied until he gets the new appointment, as the Head of the Directorate of Finance and Accounts.

However, in February 2021, President Muhammadu Buhari appointed him as the new Controller General of the Nigerian Correctional Service, a post he is still occupying till present.

The correctional service boss, Haliru Nababa does not have any personalized social media account. However, all his official duties are duly executed through the NCS official website and social media pages.

As it is the custom of all public servants, Haliru Nababa has kept his personal life away from the public view. He is a father and a devoted Muslim. He is presently based in the capital city, Abuja.

Haliru Nababa is one of the celebrated public office holders in Nigeria, the Correctional service boss’ net worth is valued at $500,000.