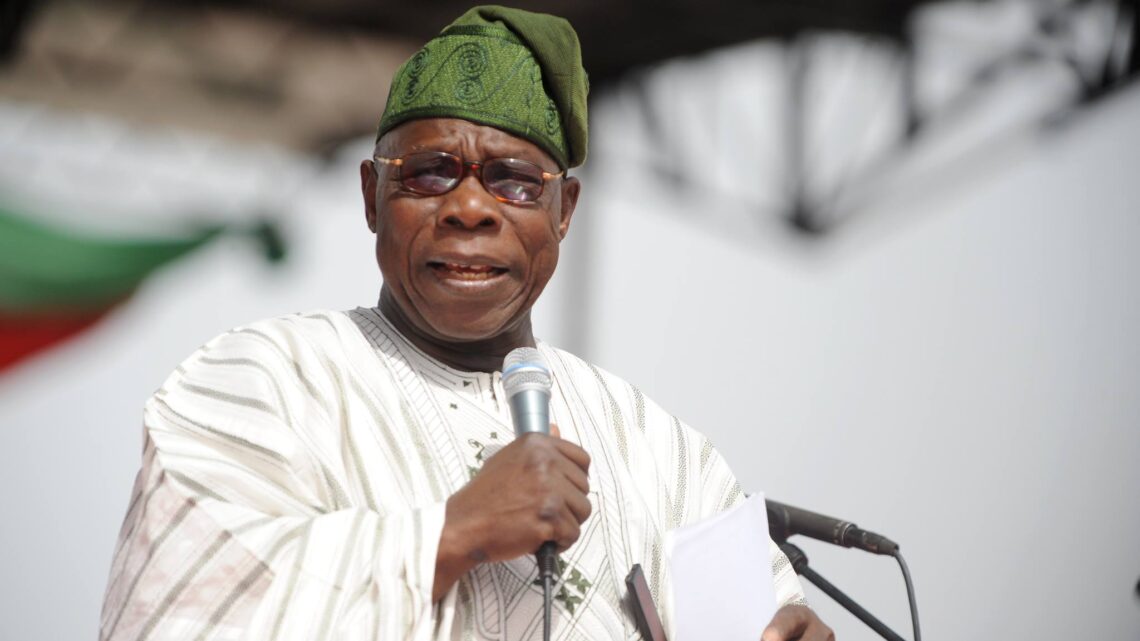 Olusegun Obasanjo was born in the farming community of Ibogun-Olaogun on the 5th of March 1937. He was born to the family of Amos Adigun Obasanjo Adekunle (father) and Ashabi Obasanjo (mother). His parents named him Olusegun Matthew Aremu Okikiola Ogunboye Obasanjo.

He is the first child of his parents’ nine offspring. Only he and his sister, Esther Adunni Eweje, survived childhood. He hails from the Owu tribe of the Yoruba ethnic group and is an indigene of Ogun State. During his childhood, he was raised as a Baptist and attended his Village Church which the US South Baptist Church set up.

Olusegun Obasanjo‘s father worked as a farmer and began participating in farming activities when he was a little boy. His farm work would only reduce when he started primary school at the age of eleven. He was an active member of the Boy Scout society during high school and excelled academically.

Sadly, his father abandoned the family, leaving his mother alone to care for him and his sister. To survive in school and pay for his examination and school fees, Olusegun Obasanjo had to work as a hired hand on farms, engage in fishing, and sell sand to builders.

Before transferring to Baptist Boys High School, Olusegun Obasanjo studied at Baptist Day School, Abeokuta. Upon graduating, he sat for the entrance exams of the University of Ibadan.

Although he was offered admission, he couldn’t afford the school fees and had to forfeit the admission.

He soon decided to become a civil engineer and joined the Nigerian Army to achieve this dream.

Olusegun Obasanjo has a master’s degree in Theology. He also bagged a Ph.D. in Theology from the National Open University Of Nigeria.

After enlisting in the Nigerian Army in 1958, Olusegun Obasanjo was sent to Regular Officers’ Training School in Teshie, Ghana. By September 1958, he became one of the selected cadets sent to Mons Officer Cadet School in Aldershot, England. After completing his studies at the institution, he was commissioned as a second lieutenant and received a certificate in Engineering. He returned to Nigeria in 1959.

In the succeeding years, Olusegun Obasanjo would rise through the ranks in the Nigerian Army, participating in a peacekeeping mission in Congo (1960-1961) and the Nigerian Civil War, where he played a senior role in fighting the Biafran Army. He became internationally known after participating in the coup that ousted General Yakubu Gowon in 1975.

A new military government was formed with General Murtala Mohammed as Head Of State and Olusegun Obasanjo as Chief of Staff (de facto number two man in the country). It was a ruling triumvirate that involved Theophilus Danjuma as Chief of Army Staff.

After Murtala Mohammed was assassinated in a failed coup, Olusegun Obasanjo was appointed by the Supreme Military Council to be Head of State of the country. He continued Murtala Mohammed‘s policies during his regime and planned to return the country to civilian rule.

He oversaw the creation of a new constitution and organized the 1979 election to usher in the Second Republic. He handed over control of the country to the democratically elected president, Alhaji Shehu Shagari, on the 1st of October 1979. After that, he retired to Ota, Ogun State, and became actively involved in the farming business. During this period, he authored four books and served as an elder statesman in Nigeria and other African countries, working to solve national conflicts.

Olusegun Obasanjo was arrested and convicted of treason by the Sani Abacha regime. He had been accused of being one of the chief conspirators of a coup to oust the current regime. Olusegun Obasanjo, who refuted the allegation and claimed innocence, had been critical of Sani Abacha‘s regime since the latter took power in 1993.

He spent the next three years in prison and was only released after the death of Sani Abacha in 1998. When the military regime of Abdulsalami Abubakar began preparation to return the country to democratic rule, Olusegun Obasanjo decided to enter into politics. He emerged as the presidential candidate of the Peoples Democratic Party (PDP) and contested in the general elections. He won the election and was inaugurated as the President of Nigeria, kickstarting the Fourth Republic.

Upon assuming office, Olusegun Obasanjo depoliticized the military, increased the Nigerian Police Force (NPF) size, and privatized several public enterprises to cut down the country’s debt and revitalize the economy. He was one of the key people who led to the creation of the African Union and served as the Chair of the organization from 2004 to 2006.

Olusegun Obasanjo was re-elected as President of the country in 2003. He sought to change the constitution to run for a third term in office, but members of the National Assembly prevented the move. He was succeeded as President by his handpicked successor, Umaru Musa Yar’Adua. After leaving office, he became Chairman of the PDP’s Board of Trustees and would voluntarily resign in April 2012.

Olusegun Obasanjo is the founder and Chairman of Obasanjo Farms, a poultry and livestock products farm in Nigeria. The farm, which has many branches, employs thousands of Nigeria.

Although Olusegun Obasanjo is a born-again Christian, he has lived a polygamous life over the years. He got married to his first wife, Oluremi Obasanjo, in 1963. They were wedded in London. She is the mother of his first child, Iyabo Obasanjo, who was born in 1967. The couple divorced in the mid-1970s.

A successful agriculturalist, Olusegun Obasanjo also has several thriving businesses across the world.

Olusegun Obasanjo‘s net worth is estimated at US$1.8 billion.