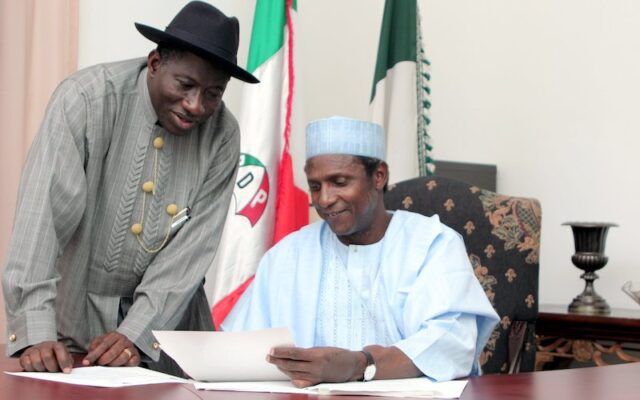 Alhaji Musa Yar’Adua was a Minister of Lagos in the First Republic and held the chieftaincy title of Matawalle (custodian of the royal treasury) of the Katsina Emirate. His mother was Hajjia Dada Habi Yar’Adua.

Umaru Musa Yar’Adua‘s elder brother was Shehu Musa Yar’Adua, who served as the Chief Of Staff (defacto Vice President) in Olusegun Obasanjo‘s military regime from 1976 to 1979.

He is an alumnus of Government College, Keffi, where he attended from 1965 to 1969. Thereafter, he studied at Barewa College and received a Higher School Certificate in 1971.

He attended Ahmadu Bello University (ABU) from 1972 to 1975 and graduated with a Bachelor’s degree in Education and Chemistry. In 1978, Umaru Musa Yar’Adua returned to the institution to pursue a Master’s Degree in Analytical Chemistry.

In 1983, Umaru Musa Yar’Adua switched from public service to the private sector. He began working in the agricultural sector and was the pioneer General Manager of Sambo Farms Ltd., located in Funtua, Katsina State. He was a staff of the farm from 1983 to 1989. Besides his full-time job, he held other leadership positions in the eighties and nineties. He served as a board member of Kastina State Farmer’s Supply Company (1984-1985), a Member Of The Governing Council Of Kastina College Of Arts, Science and Technology Zaria and Kastina Polytechnic (1978-1983), and Board Chairman Of Kastina State Investment and Property Development Company (1994-1996).

Umaru Musa Yar’Adua joined party politics in the second republic and was a People’s Redemption Party member from 1979-1983. He was a founding member of the People’s Front Of Nigeria (PFN), a political group under the leadership of his elder brother, the late Major-General Shehu Musa Yar’Adua. Notable members of the group include Atiku Abubakar, Baba Gana Kingibe, Bola Tinubu, and Rabiu Kwankwaso. The PFN later merged with other political associations to form the Social Democratic Party.

In 1998, Umaru Musa Yar’Adua joined the newly formed People’s Democratic Party (PDP) and decided to give his governorship ambition a second try. He secured the party’s guber ticket to contest in the 1999 Governorship election and won the election. He was inaugurated as Governor on the 29th of May 1999 and re-elected for a second term in 2003. He completed his second term in office on the 29th of May 2007 and was succeeded by Ibrahim Shema.

During his time in office as Governor, Kastina state experienced a lot of developments. He was the first Governor in the country to publicly declare his assets. Umaru Musa Yar’Adua prioritized education in his administration and built many schools in local communities in the state. During his tenure, Kastina State became the fifth northern state to adopt Sharia or Islamic Law.

In December 2006, Umaru Musa Yar’Adua won the presidential primaries of the PDP and emerged as the ruling party’s presidential candidate in the 2007 elections. He won the presidential election held on the 21st of April 2007, securing 70% of the votes (24.6 million). He was inaugurated as President on the 29th of May 2007. Muhammadu Buhari of the All Nigeria People’s Party (ANPP) and Atiku Abubakar of the Action Congress (AC) were his two main contenders in the election. Upon assuming office, he proposed a national unity government, and two opposition parties, the ANPP and PPA (Progressive Peoples Alliance), agreed to join his government.

On the 26th of July 2007, Umaru Musa Yar’Adua swore in his cabinet, composed of 39 ministers. His administration also released a Seven-point agenda in August 2007. The agenda was designed to help Nigeria become one of the top twenty economies in the world by 2020.

However, the administration could not achieve the goals due to his untimely death on the 5th of May 2010. He died at the presidential villa in Aso Rock. He was buried according to Islamic Rites on the 6th of May 2010 in his hometown, Kastina. After Umaru Musa Yar’Adua‘s death was announced, the Federal Government led by the Acting-President, Goodluck Ebele Jonathan, declared a seven-day mourning period in his honor.

In 1975, Umaru Musa Yar’Adua got married to Turai Yar’Adua. She is also from Kastina State. The couple was blessed with seven children – five daughters and two sons – and several grandchildren.

Umaru Musa Yar’Adua was also married to Umar Radda from 1992 to 1997, and their union was blessed with two children.

Umaru Musa Yar’Adua passed away at the age of 58. He had suffered from a Kidney condition for many years and died after a protracted period on the sick bed.

He is also the first Nigerian president to publicly declare his assets. He did this on the 28th of June 2007. At the time, Umaru Musa Yar’Adua had $5.8 million (USD) in assets and $0.5 million (USD) In liabilities.

Umaru Musa Yar’Adua amassed a fortune from his business investments and salary as a public servant.