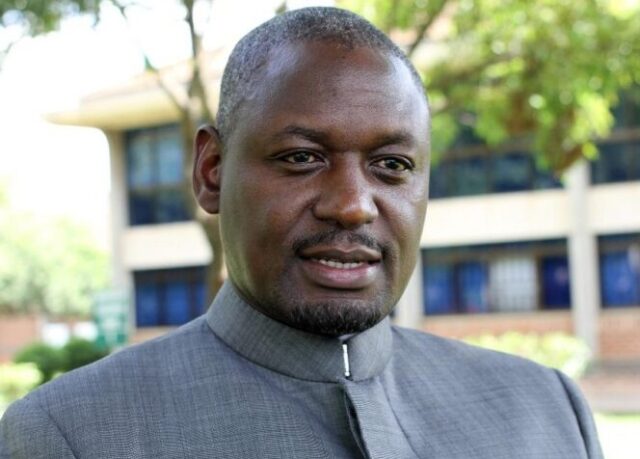 Paul Otiende Amollo is a renowned Kenyan lawyer and politician born on the 1st of February, 1971, in Kisumu County at Maseno.

He is currently a Member of Parliament for Rarieda Constituency.

Paul Otiende Amollo, one of the most respected Kenyan Advocates of the High Court, has served in many positions, including serving as the Chair of the International Commission of Jurists (Kenya – Section) and Chair of the Action Aid International (Kenya).

Paul Otiende Amollo was born on the first day of February (1st of Feb. 1971), and he grew up with his parents, who were not financially buoyant.

At some point, he thought of becoming a fisherman.

However, he dropped out of primary school to practice fishing before his family convinced him to return to school.

His main reason for making this decision was because of his parents’ financial constraints. As a result, he thought he wouldn’t be able to further his studies after Primary school.

He was, however, convinced and encouraged by her aunt to resume back in school.

Paul Otiende Amollo‘s father, who was working for the Maseno University administration as a laborer, was sacked and sent out of the house while he was still young.

This occurrence inspired him to strive and study. It was in all these hardships that he aimed to reach the peak of his career today.

Paul Otiende Amollo did his primary education at Maseno Mixed Primary School. It was effortless for him to join Maranda Boys’ High School in 1986 because he was a brilliant student.

He graduated from Maranda Boys’ High School in 1989 with a KCSE Mean grade of A (plain).

After his high school education, he joined the University of Nairobi to study law, and he obtained a Bachelor of Laws in 1995.

He also has a Diploma in Law from the Kenya School of Law. In 1998, he obtained a Certificate in International Human Rights Law from the University of Lund, Sweden.

In 2014, Amollo went on to do his Master’s degree in Master of Laws (LL.M) from the University of Nairobi (D.A.A.D. German Academic Exchange Program) Scholarship.

Apart from being a Lawyer, Paul Otiende Amollo is a successful researcher. He has done several types of research on the areas of Constitutional Law, theory and practice, the African Human Rights System, the question of HIV/AIDS, and the Law.

He is also working for the Kenyan Government as the Chairperson of the Commission on Administrative Justice (Office of the Ombudsman).

Paul Otiende Amollo as well as a lot more responsibilities in the country, which include the below:

Most importantly, Paul Otiende Amollo is currently a Member of the National Assembly, Rarieda Constituency.

Paul Otiende Amollo is married to Lilian Amollo. He is said to be a good and responsible man by his wife.

He stated in an interview how he likes spending time with his loving family.

Paul Otiende Amollo is present on social media. He has over 442k followers on Twitter, while the authenticity of his account on Instagram is still questionable as he has just a little above 5k followers.

As a renowned lawyer and researcher, Paul Otiende Amollo has made for himself a lot of wealth. He currently has an estimated net worth of over $900,000.