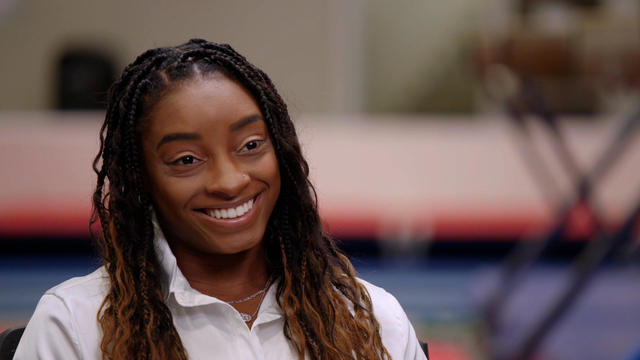 She is the most decorated American gymnast with a combined total of 30 Championship and Olympic medals.

She is the third most decorated gymnast in the world.

Simone Biles was born on the 14th of March 1997 in Columbus, Ohio. She is originally from Texas. She is the third child of the family and has three siblings: Adria, Ashley, and Tevin.

Her mother is Shannon. Simone Biles‘s mum was unable to take care of her and her siblings, so they went in and out of foster care often.

When Simone turned three, her maternal grandfather began taking care of her and her siblings. They moved into his house in Spring, Texas. Two years after, her grandfather and his second wife officially adopted Simone and Adria.

While her grandpa’s sister, Harriet, adopted her older siblings, Ashley and Tevin.

Simone was raised in the Catholic faith which she still practices today.

When she turned fifteen (2015), she chose to switch to homeschooling and tutors were hired to teach her.

She graduated from high school in 2015. In January 2018, she enrolled for an online degree in Business Administration at the University Of The People.

Simone Biles‘s foray into the world of gymnastics started at the young age of six. This was at a day-care field trip. At age, she began training with coach Aimee Boorman.

During her junior high and high school days, she participated actively in gymnastics. In 2016, she competed at the Olympics held in Rio de Janeiro and won four gold medals and one bronze medal.

The 25-year-old Simone Biles was once a victim of sexual assault. She has accused Larry Nassar, USA Gymnastics physician, of sexually abusing in the past

She and fellow gymnast, Stacey Ervin Jr split up after three years of dating. In August 2020, it was confirmed that she was romantically involved with American footballer, Jonathan Owens. The couple’s relationship is waxing strong every day.

She has a French bulldog which she adores a lot. The dog is named Lilo. She has also revealed to the world that she has ADHD (Attention Deficit Hyperactivity Disorder).