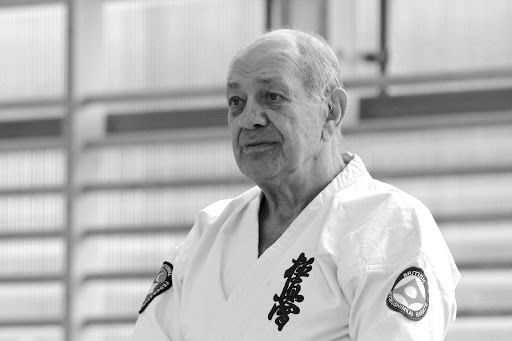 He was a prominent South African-British master of Kyokushin Karate.

He learned directly from Masutatsu Oyama and was a senior instructor in Oyama’s International Karate Organization (IKO) until 1991 when he resigned from the IKO.

Steve Arneil was the founder and President of the International Federation of Karate (IFK), holds the rank of 10th Dan and holds the title Hanshi.

The movie was not an easy one for them.

When Steve Arneil was ten years old, his family moved to Northern Rhodesia (now Zambia), and he began training in Kung Fu, Judo and boxing there.

At age 16, he was selected to represent Northern Rhodesia in rugby.

By the age of 17, Steve Arneil had earned black belt status in Judo, and he had also practised Kenpo and Karate.

He moved to Durban, South Africa, for tertiary studies in mechanical engineering.

He studied few Karate styles, including Shotokan, Wado-Ryu, and Goju-Ryu (under Gogen Yamaguchi).

In Durban, Steve Arneil trained at a judo Dojo (training hall) that also offered karate training. He made a practice of going down to the harbour and asking arriving Japanese people if they practised Karate; if they did, he would invite them to train at the Dojo.

In 1959, Steve Arneil left South Africa, bound for Southeast Asia.
On 22 May 1965, he became the first person to complete the 100-man Kumite after Oyama.

He went to the United Kingdom to help establish Kyokushin Karate there, but it was hard.

He also tried to move to Australia, but it failed; Steve Arneil said that “it is purely by chance that we ended up staying in England.” In late 1965, he later died on the 2nd of July 2021.

He recalled that, unlike the other Karate schools he had visited in Japan (who had welcomed him with minimal reservation), Oyama’s Kyokushin school. We found no other educational record.

In May 1966, he received a promotion to the rank of 4th dan. From 1968 to 1976, he was the Team Manager and Coach for the All Styles English and British Karate team which, in 1975/76, became the first non-Japanese team to win the Karate World Championship.

In 1991, Steve Arneil and the BKK resigned from the IKO, and Arneil then founded his karate organisation, the IFK. Arneil is currently the President of the IFK and the BKK. On 30 May 1992, he got awarded the British karate community of 8th  Dan for his services to karate in the UK.

The 50th anniversary of the British Kyokushinkai Karate (BKK) organisation was celebrated in 2015, and the main celebration took place at the 39th British Open Knockdown Championships in Crawley on 17 October.

No social media of Steve Arneil was disclosed. We will provide if any is gotten.

Steve Arneil got married to a Japanese woman in 1964, Mrs Tsuyuko Arneil. “She was a banker.

She supported the husband when he was still training. The media disclosed no records about his children or past relationship.

Steve Arneil estimated net worth is $4 million and Primary income from karateka.

We will update this information soon.