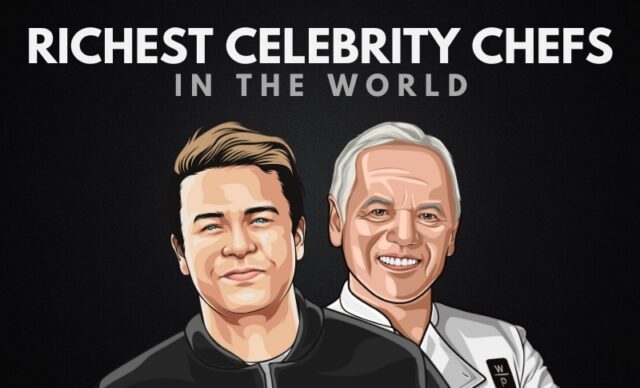 Besides creating thousands of jobs, the restaurant industry has birthed stars in the form of chefs. These celebrity chefs have become famous due to their superior cooking skills, knowledge of different recipes, and the ability to run exquisite restaurants.

They have also become popular because they have shared their knowledge with the public by appearing on reality TV shows and writing cookbooks. They are the authority when it comes to cooking in the world. These chefs have made a fortune off their craft by doing all these and more.

In this piece, we will be looking at the Top Ten Richest Celebrity Chefs in the World.

David Chang is a Korean-American celebrity chef. He is a restaurateur, author, podcaster, and TV personality. He is the founder and CEO of Momofuku Restaurant Group. In 2011, he co-founded the magazine Lucky Peach, one of the world’s leading food magazines.

He is the creator and producer of the Netflix Original series Ugly Delicious and appeared in the series as an actor. He is also the founder of Majordomo Media Group, the producer of many TV shows and podcasts.

David Chang‘s net worth is estimated to be worth $60 million (USD).

Robert William Flay is an American celebrity chef who is known professionally as Bobby Flay. He is a restaurateur and reality TV personality. He is the founder, CEO, and executive chef of a chain of restaurants such as Bobby’s Burger Palace and the Mesa Grill.

Since 1995, he has had a long-term working relationship with Food Network. His work with the media company has won him four Daytime Emmy Awards and a star on the Hollywood Walk Of Fame.

Bobby Flay‘s net worth is estimated to be worth $65 million (USD).

Emeril Lagassé is an American celebrity chef, restaurant owner, author, and TV personality. He is a winner of the National Best Recipe Award. He clinched the award in 2003 for his Turkey and Hot Sausage Chili recipe.

He is the New New Orleans Style pioneer and is a regional James Beard Award winner. He has appeared severally on the Food Network shows Emeril Live and Essence Of Emeril.

Emeril Lagasse has an estimated net worth of $70 million (USD).

She hosts the famous shows Rachael Ray and 30 Minutes Meals, Rachael Ray’s Tasty Travels, and Rachael Ray’s Kids Cook-Off. She has authored several cookbooks and is the founder of the food magazine, Every Day with Rachael Ray.

The celebrity cook Rachael Ray‘s net worth is estimated to be worth $80 million (USD).

Wolfgang Johannes Puck is an American celebrity chef, restaurant owner, and entrepreneur of Austrian origin. He launched his cooking career in the United States in 1973, when he moved into the country at the age of 24.

He has established several restaurants in the past five decades. He is the author of the cookbook, Modern French Cooking for the American Kitchen, published in 1981. He is the founder and CEO of Wolfgang Puck companies.

Wolfgang Puck‘s net worth is estimated to be worth $90 million (USD).

Thomas Aloysius Keller is an American celebrity chef, restaurant owner, and author. He is the founder and executive chef of the restaurant, The French Laundry, which is located in California.

He has won several awards from the James Beard Foundation, such as Best California Chef (1996) and Best Chef in America (1997). His restaurant had been listed many times on the annual Restaurant Magazine’s Top 50 Restaurants of the World.

Thomas Keller has an estimated net worth of $130 million (USD).

Nobuyuki Matsuhisa is an internationally celebrated Japanese chef, restaurateur, and actor. He has achieved fame for his unique cooking style of fusing traditional Japanese dishes and Peruvian ingredients.

He has restaurants in California, Colorado, Munich, Switzerland, and Greece. He has played minor roles in some films. He also owns hotels in different locations in the world.

Nobu Matsuhisa‘s net worth is estimated to be worth $200 million (USD).

Gordon James Ramsay is a leading celebrity chef from Great Britain. He is a restaurateur, TV personality, author, and food critic. He has written over 24 books and is a regular contributor to The Times magazine for its food-and-drink column.

He is the founder of the restaurant group Gordon Ramsay Restaurants. He has appeared on several cooking TV shows and is one of the most influential chefs in the world.

Gordon Ramsay‘s net worth is estimated to be worth $220 million (USD).

James Trevor Oliver is a British chef, restaurant owner, and author. As a TV personality, he has been featured on several TV shows. He is the creator of The Naked Chef series, which premiered in 1999.

He is the founder of the restaurant chain James Oliver Restaurant Group. He won the 2010 TED Prize in December 2009 and has sold over 14.55 million books, making him the second-best-selling British Author of all time.

James Oliver has an estimated net worth of $400 million (USD).

Alan Wong is a celebrity chef, restaurant chain owner, and one of the co-founders of the Hawaii Regional Cuisine. As an author, he contributed to the writing of the bestselling cookbook, The New Cuisine Of Hawaii.

He is a popular TV personality and has appeared on several food shows. He owns several restaurants in Hawaii and Japan.

Alan Wong‘s net worth is estimated to be worth $1.1 billion (USD).