10 Most Expensive Cars In The World | TheCityCeleb 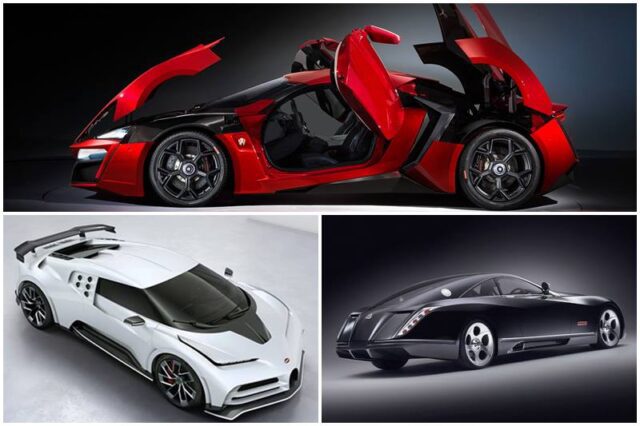 Since the invention of the first set of cars by Henry Ford and Karl Benz, man has fallen in love with the four-wheeled locomotive machine. This has led to the birth of several automobile companies and the creation of thousands of car models.

Annually, companies in the automotive industry try to outdo one another in producing better cars. Each new car model comes with its unique design and features. Some of these cars are made for a middle-class target market, while some are for a luxurious market.

In this article, we will be looking at the Top Ten Most Expensive Cars in the World.

Bugatti unveiled this limited-production high variant car in August 2019. The car is known for its characteristic 1,175 KW ( 1,580 hp) quad-turbocharged W16 engine. It is equipped with a top speed limiter and can reach a maximum speed of 438 km/h (300 mph).

The Lamborghini Veneno Roadster is the brainchild of the Italian automobile company Lamborghini. It is a limited production high-performance sports car created to celebrate Lamborghini‘s 50th anniversary.

This car is fitted with an Inconel exhaust system, carbon-ceramic brakes with ABS, airbags, F1 paddle-shift gearbox, Chrono instrument, and a hydraulic lifting system. The vehicle is valued at $4.8 million (USD).

Italian automobile Pagani manufactures the Imola, and it was released in February 2020.

Imola is a limited edition supercar, and the manufacturers made only five cars. The car is characterized by its efficient performance, which is made possible by a 6.0L twin-turbo V12 engine. The engine has an output of 827 horsepower, a 7-speed transverse Xtrac gearbox, and a triple-disc clutch. It also has an electromechanical differential unit that manages the engine and aerodynamics.

All the five cars of the Imola edition have been bought. The company sold them for $5.4 million (USD).

This is a mid-engine track-focused sports car manufactured by Bugatti Automobiles S.A.S. The car, which was named after Albert Divo, a French racing driver, was designed by Frank Heyl.

Divo is a two-door coupé track day car with an 8.0L quad-turbocharged W16 engine. It has a power output of 1,103 KW (1,479) and a 7-speed dual-clutch transmission. Bugatti produced only 40 units of the car, and they were all pre-sold before they were manufactured.

The Mercedes Benz Maybach Exelero is a high-performance car manufactured by Stola, collaborating with Daimler Chrysler. The car is powered by a 5.9L twin-turbocharged V12 engine, which has a power of 690 hp (515 KW) at 5000 rpm.

The Exelero has a 5G-Tronic automatic transmission and has alloy wheels with diameters of 23 inches. Fulda manufactured the car’s tyres. This expensive vehicle is a car and weighs 2,660 kg (5,864 lb). It is twice the size of the Lamborghini Huracan.

The Bugatti Centodieci is a product of the French automotive manufacturer, Bugatti. It is a limited production mid-engine sports car manufactured to commemorate Bugatti‘s 110th anniversary. It has an 8.0L quad-turbocharged W16 engine and is rated at 1,176 KW (1,578 hp) at 7,000 rpm. It is a 2-door coupé and all-wheel-drive car and has a 7-speed dual-clutch transmission.

Rolls Royce Motors manufacture Rolls Royce Sweptail. It is a one-off large car made in the United Kingdom and released in May 2017. The car was unveiled at the annual Concorso d’Eleganza Villa d’Este. At the time of its release, it was the most expensive automobile globally.

Sweptail is a full-size luxury car hand-built for four years based on the Rolls Royce Phantom Coupé.
It is priced at Rolls Royce Sweptail. The car is worth $13 million (USD).

The vehicle’s wheels are made from forged aluminum and have four massive six-piston ventilated disc brakes. Pagani produced only three units of the car. It is worth $17 million (USD).

The Bugatti La Voiture Noire was unveiled at the Geneva Motor Show in 2019. The supercar was manufactured by the French Automobile company Bugatti. It was created to celebrate the 110th anniversary of Bugatti.

Reserved for only the wealthiest persons in the world, Bugatti La Voiture Noire is worth $18.7 million (USD).