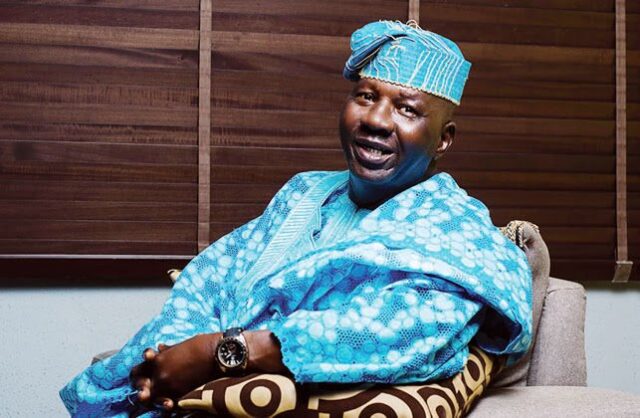 He was one of the actors that graced the Nollywood Yoruba sector of the Nigerian movie industry.

Baba Suwe, as he was fondly called, is dead, but his movies remain evergreen due to his witty saying and comical display in any role he played.

Born into a polygamous family of three wives, Baba Suwe grew up in Lagos. He was born on August 22nd, 1958.

An indigene of Igbgogbo, Ikorodu, he had his primary education at Jamaitul Islamial Primary School in Lagos.

He was also a student of Children Boarding School, Osogbo. He proceeded to Adekanbi Commercial High School in Mile 12, Lagos.

Baba Suwe started acting at 18 when he dropped out of secondary school, and then he was in form four.

He developed the passion when Baba Mero and his group came to the Children’s boarding school in Osogbo to act. After watching them, he got drums and other musical instruments, picked some guys in his streets like Mufitau Ilumoka, Sola Taiwo, and others, and formed a theater group.

That was what metamorphosed into the brand ‘Baba Suwe’ today. His first show was at Amuto playing ground, Lagos Island. Although it was a free show, he was happy because it recorded a huge success.

He had featured and produced several Nigerian movies, such as Baba Jaiye Jaiye, a movie that featured Funke Akindele and Femi Adebayo, the son of the veteran actor Adebayo Salami. He is known for the 21st-century movies; N150 Million (2003), Kowope (2004), and 36 Kiniun (2003).

In 2011, Baba Suwe alleged cocaine trafficking by the National Drug Law Enforcement Agency. This allegation was described as false and defamatory by the Lagos high court of law ruling. His solicitor was the late Bamidele Aturu, a Nigerian lawyer and human rights activist.

Baba Suwe was married to Mrs. Monsurat Omidina, a popular comedian and actress known as Omoladun Kenkelewu, from 1995 until she died in 2009.

He has three children – Junior Ominida, Halimat Omidina, and Okiki Omidina. After the death of his wife, his step-daughter, Omolara Kareem, accused him of killing her mother.

According to her, “She [Monsurat] died of high blood pressure due to the squabbles she had with her hubby.” He has since re-married.

In 2017, the veteran actor Baba Suwe suffered a stroke and could not move around since then. He blamed his health challenges on his detainment by the National Drug Law Enforcement Agency (NDLEA).

Baba Suwe was a force to reckon with, especially in the Yoruba movie industry, rated one of the richest and most influential with a net worth of about US$500,000.