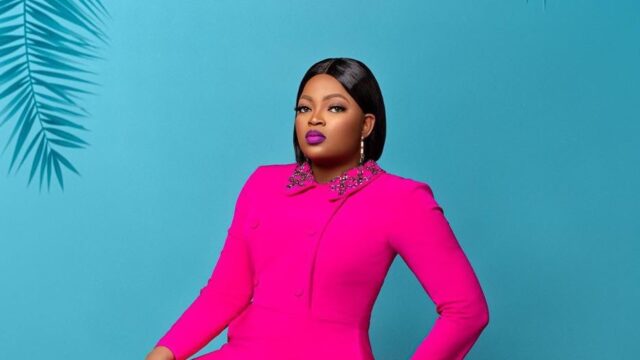 She starred in the sitcom I Need to Know from 1998 to 2002, and in 2009, she won the Africa Movie Academy Award for Best Actress in a Leading Role.

She rose to fame for her role in the movie titled Jenifa, which earned her the nickname Jenifa. The Omo Ghetto trilogy contributed to her fame.

Funke Akindele played the lead role in the show Jenifa’s Diary, for which she was named the Best Actress in a Comedy at the 2016 Africa Magic Viewers Choice Awards.

She is the second of three children (two girls and one boy). Her mother is a medical doctor, while her father is a retired school principal. She also has a sister named Abimbola Maria Akindele.

Funke Akindele came into the limelight after starring in the popular United Nations Population Fund (UNFPA)-sponsored sitcom I Need to Know, from 1998 to 2002. She played Bisi, a curious but brilliant secondary school student. Funke Akindele‘s big break came in 2008 when she appeared in the movie Jenifa.

In January 2018, there was a controversy when TheCityCeleb reported that Funke Akindele would get her Hollywood debut in Marvel’s Avengers: Infinity War as she was listed as a member of the cast on IMDb.

Mainstream Nigerian press reported that Jenifa was set to star in Infinity War as the guard Dora Milaje, citing IMDb. Some weeks later, her name was replaced with that of fellow Nigerian actress Genevieve Nnaji, with Funke Akindele‘s upload being a hack.

In July 2016, in an interview, Funke Akindele stated she was acting less in the Yoruba film industry because of piracy.

The show is a spin-off from the movie Jenifa. The 2018 comedy film Moms at War stars Funke Akindele and Omoni Oboli.

In July 2019, Funke Akindele started a new web series, Aiyetoro Town, a spinoff from her popular TV series, Jenifa’s Diary. She is the CEO of Scene One Film Production.

She made her directorial debut in the 2019 political drama film, Your Excellency.

Her pregnancy rumors were among the top searched results on Google search engine in August 2017. Funke Akindele gave birth to twin boys in December 2018 and has several step-children.

Funke Akindele runs a nongovernmental organization known as the Jenifa Foundation, which aims at providing young people with vocational skills.

Funke Akindele has endorsement deals such as her being signed as an Ambassador to Dettol and Irokotv.

In 2018, she was signed as brand ambassador for Keystone Bank.

In November 2019, she signed an endorsement deal with Waw Nigeria, which manufactures detergent and bar soap.

The films of Funke Akindele are listed in alphabetical order.

As of now, the talented actress and producer Funke Akindele net worth is placed at US$3.5 million. She is one of the richest actresses in Nigeria.

Funke Akindele has endorsement deals such as her being signed as an Ambassador to Irokotv.