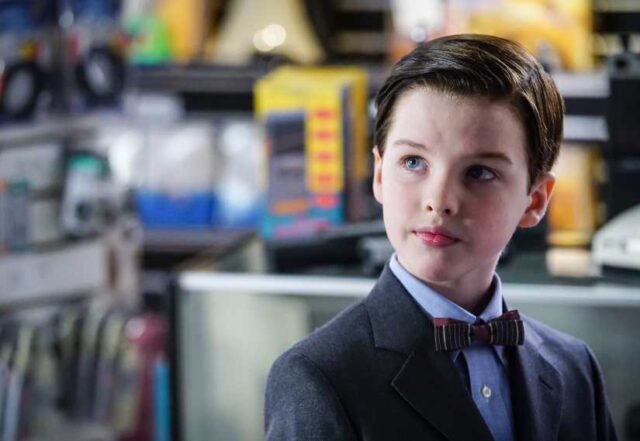 He is notably known for portraying the younger version of Jim Parsons‘ The Big Bang Theory character, Sheldon Cooper.

The talented artist made his debut in his acting career through Law & Order: Special Victims Unit and has since appeared in various TV shows and films.

Iain Armitage resides in Arlington, Virginia, and is the son of actor Euan Morton, who was born in Falkirk, Scotland, and theater producer Lee Armitage.

It was reported that he was named after Sir Ian McKellen.

He is the grandson of former United States Deputy Secretary of State Richard Lee Armitage.

Iain Armitage was just three years old when he uploaded his first video on the streaming platform YouTube.

Over the years, his fame rose to prominence after his videos grabbed various theater agencies’ attention.

Iain Armitage first gained prominence via his YouTube series, Iain Loves Theatre where he reviews stage shows from musical theater. His videos caught the attention of the theater industry, including a couple of agents who wanted to sign him up. During the 2015 Tony Awards, he served as a correspondent for Perez Hilton and was even referenced in the show’s opening number.

In January 2017, Iain Armitage starred in an episode of Law & Order: Special Victims Unit (Chasing Theo), playing a young child, Theo Lachere, who has been kidnapped. After that, he appeared in Impractical Jokers “Look Out Below,” where he was talked to by Murr in “Who Let The Dogs Out?” in the second challenge of that episode.

Iain Armitage played Ziggy Chapman in the HBO miniseries Big Little Lies, and he appeared in The Glass Castle, a film adaptation of Jeannette Walls‘ memoir of the same name. In the same year, he was also in the films I’m Not Here and Our Soul at Night, starring Jane Fonda and Robert Redford.

In 2017, Iain Armitage was cast as Sheldon Cooper as a child in Young Sheldon, a prequel to the sitcom The Big Bang Theory. Then, in December 2018, he appeared in an episode of The Big Bang Theory, playing young Sheldon on a videotape recording intended to cheer up and encourage an older Sheldon.

Iain Armitage is taking care of his two pet hamsters named Natasha and Poppy, and he loves them both very much. The young actor has also shared multiple pictures of his pets on his Instagram account.

The talented star has been enjoying his time with his pets and friends. But, for now, The Young Sheldon actor is focusing on his studies and future career projects.

In 2018, Iain Armitage received the Young Artist Award for Best Performance in a TV Series – Leading Young Actor for his role as Sheldon Cooper. He also provided the voice for young Shaggy Rogers in Scoob!

Iain Armitage is not married and has no girlfriend.

According to multiple sources, Iain Armitage‘s net worth is estimated to be $2 million – $4 million. The young actor has appeared in various hit TV shows and films like Big Little Lies, Young Sheldon, The Glass Castle, Our Souls at Night, and I’m Not Sure.

His appearances for such hit shows and movies must have helped Iain Armitage to earn a considerable sum of money.