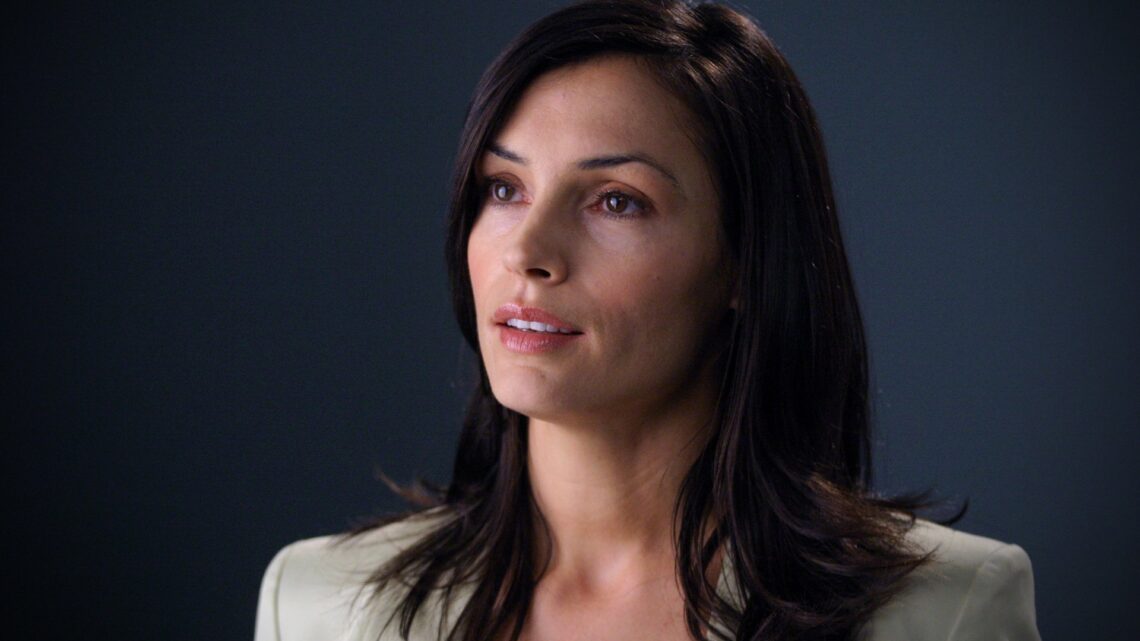 Another remarkable achievement by the Dutch includes an appointment as Goodwill Ambassador for Integrity by the United Nations in 2008.

Famke Beumer Janssen is of Dutch origin, born 5 November 1964 in Amstelveen, the Netherlands.

She is a sister to the famous film director Antoinette Beumer and actress Marjolein Beumer.

However, both of them changed their surnames to Beumer after their parents divorced.

In addition to her native Dutch, Famke Janssen speaks English and French fluently. She also learned German but is not quite fluent in the language.

Famke Janssen did her primary and high school education in a local school in her hometown in Amstelveen, Netherlands.

After high school graduation, she studied economics for a year at the University of Amsterdam, in what she described as “the stupidest idea I ever had”; thus, she dropped out.

However, in the early 1990s, she enrolled at the prestigious Columbia University‘s School of General Studies, studying creative writing and literature.

Famke Janssen began her journey to greatness in 1984, when she moved to the United States for a professional career as a fashion model. She signed with Elite Model Management and worked together with Giorgio Armani, Yves Saint Laurent, Victoria’s Secret, and Chanel. She also appeared in a 1988 commercial to promote the perfume Exclamation by Coty, Inc. Her beauty has been compared to several 1940s movie stars such as Hedy Lamarr.

After retirement from modeling in the early 1990s, Famke Janssen had guest roles on television series, including a performance in the 1992 Star Trek: The Next Generation (episode “The Perfect Mate”), as Kamala, alongside Patrick Stewart, with whom she later acted in the X-Men film series. That same year, Famke Janssen was offered the role of Jadzia Dax in Star Trek: Deep Space Nine but rejected the offer to pursue film roles. Instead, she got her first film role starring alongside Jeff Goldblum in a 1992 crime drama film titled Fathers & Sons.

In 1995, Famke Janssen starred in Pierce Brosnan‘s first James Bond film, titled Golden Eye, as femme fatale Xenia Onatopp. She also appeared in Lord of Illusions opposite Scott Bakula, and in the late 1990s, she was cast in The Faculty, Rounders, House on Haunted Hill, and Deep Rising.

In 2000, Famke Janssen portrayed superhero, Dr Jean Grey, in a Marvel Studios film titled X-Men and later reprised the role in the 2003 sequel, titled X2, where her character exhibited signs of increasing powers, however at the end of the film, she is presumably killed.

Furthermore, Famke Janssen returned as Jean, whose death in X2 resurrected her dark alternate personality, titled Phoenix in X-Men: The Last Stand in 2006. For her performance, she won a Saturn Award for Best Supporting Actress.
Again, she returned as Jean in a 2013 film titled The Wolverine, playing as a hallucination of Wolverine. And in 2014, Famke Janssen reprised her role as Jean Grey in a cameo for X-Men: Days of Future Past.

In 2007, she appeared in Turn, the River, for which she was awarded the Special Recognition Best Actress Award at the prestigious Hamptons International Film Festival.

The following year, Famke Janssen starred in Luc Besson‘s Taken. She continued to work in television, starring in NBC’s police drama titled Winters and Showtime’s The Farm, which is a spinoff of The L Word set in a women’s prison.

However, both pilots were rejected by their networks. Additionally, Luc Besson provided the Dutch language narration for the Studio Tram Tour at all Disney theme parks.

Back in 2011, Famke Janssen made her directorial debut with a drama titled Bringing Up Bobby. In addition, she wrote the screenplay for the film, starring Milla Jovovich, Bill Pullman, and Marcia Cross.
Furthermore, she reprised her role as Lenore Mills in Taken 2 in 2012 and Taken 3 in 2014. She also played the main villain named Muriel in a film titled Hansel & Gretel: Witch Hunters in 2013.

She had a recurring role in an ABC crime thriller television series titled How To Get Away With Murder, starring in 9 episodes throughout the series, starting her role in season two of the show and concluding it in the series finale.

Famke Janssen was cast in a starring role in an NBC crime thriller, The Blacklist: Redemption, a spin-off of the NBC series titled The Blacklist, in March 2016 (it was picked up to series in May 2016). And In 2019, she served as a juror for the famous Tribeca Film Festival.

Also, in 2019, Famke Janssen appeared alongside Jeffrey Dean Morgan in The Postcard Killings, released in 2020. In 2021, Famke Janssen will feature in a Christian romantic drama film titled Love, together with an upcoming action-thriller titled Dangerous.

Famke Janssen has gathered numerous fans throughout her blistering career, most of which follow her on her social media platforms.

Although she is middle-aged, Famke Janssen still maintains her good looks. She has a moderate height of 5 ft 11 inches (1.82 m) and weighs approximately 62 kg (137 lbs). She has a slim body type and figures measurement of 36-25-35 inches.

A breakdown of her body measurement is breast/bra size 34B, waist 25 inches, and hips 35 inches. Her dress size is 4 (US). She has curly dark brown hair and eyes hazel.

In 1995, Famke Janssen married a handsome writer and director named Kip Williams, who is the son of skillful architect Tod Williams. However, the pair divorced in 2000. Part of the reason for their divorce, according to her, is that she does not want to have children.

On 28 January 2008, Famke Janssen was appointed a Goodwill Ambassador for Integrity for the United Nations Office on Drugs and Crime at a United Nations anti-corruption conference held in Nusa Dua, Bali, that same year.

In 2016, Famke Janssen showed unprofessionalized frustration for not being cast in the new X-Men movie X-Men: Apocalypse, accusing Hollywood of being sexist toward older women. In her words, “Women, it’s interesting because they’re replaced, and the older versions are never to be seen again… whereas the men are allowed to be both ages.”

Famke Janssen is one of the highest-paid actresses in America; this is major because of her influence and popularity, making her one of the richest and most influential.

The former model, Famke Janssen is believed to have acquired an estimated net worth of $15 million. She earns most of her income from her career as an actress, film director, and model.

Famke Janssen is s veteran in the American movie industry. She has starred in numerous films and television series.

Some of her biggest came in the X-Men movies and other blockbuster films, which we have highlighted below.