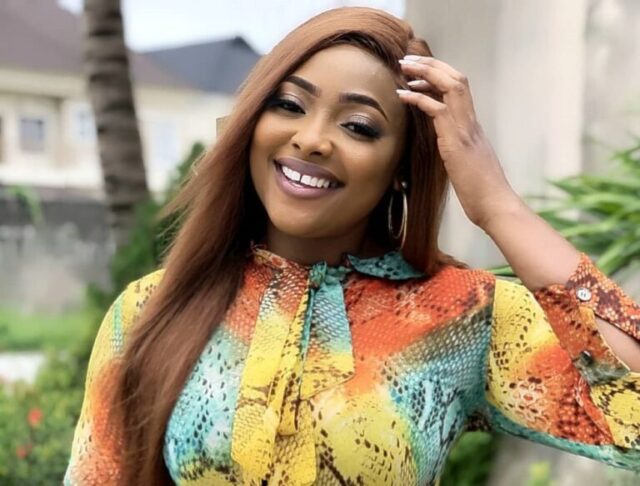 She won the City People Entertainment Awards for Most Promising Actress in 2018.

She has acted in many blockbuster movies and series. The 33-year-old is the brand ambassador of some leading companies in Nigeria.

Mary Lazarus was born to the family of Mr. and Mrs. Lazarus in 1989. She was born and bred in the city of Lagos.

She is an Igbo lady who hails from Ukwa East L.G.A in Abia State. She has six siblings and is the second youngest child of the family.

She has a twin brother named Joseph who works in the corporate sector.

She studied at the premier university of Nigeria, the University of Ibadan, and graduated with a degree in Geography.

Mary Lazarus first started modeling before joining the Nollywood industry. She received her first modeling gig at the young age of thirteen. This was in 2002.

In 2009, she debuted as an actress in the movie, Waiting Years. She had been introduced to the director of the movie by a friend, Gbenro Ajibade.

Since that moment, she has grown to become of the most successful actresses in the industry. She has starred in several movies and TV series.

Some of the big names she has collaborated with in the past twelve years include; Kenneth Okolie, Mary Remmy Njoku, Bolanle Ninolowo, Fredrick Leonard, Yemi Shodimu, Eniola Ajao, Kiki Bakare, Henry Arnold, Jimmy Odukoya, Funke Kate, amongst others.

As a producer, she released the movie Dance To My Beat in 2017. While in 2019, she dropped the highly grossing film, Social Media 101 which was shown in cinemas nationwide.

As a model, she has walked many runways and engaged in commercial ad campaigns for brands such as MTN, Globacom, Airtel, Pampers, Coca-Cola, Semovita, and Ecobank.

She was nominated for the Best Actress in a supporting role at the 2020 AMVCA.

Mary Lazarus has a very active Instagram profile and boasts of over 741k followers.

The talented creative, Mary Lazarus is 33 years old. She is a devout Christian. She is currently engaged to a handsome young man. They plan to tie the knot soon.

She resides in Lagos Island in a very nice apartment. She owns some exotic cars as rides.

Why I See Real Estate As A Generational Wealth – Omoha Nduka