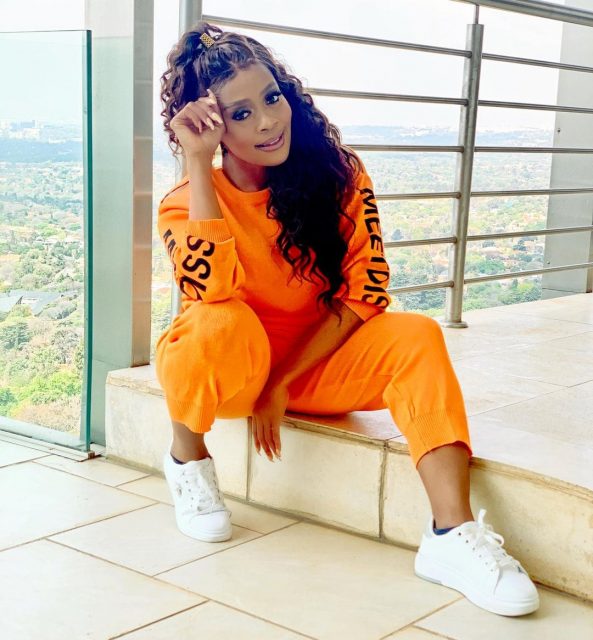 The famous vocalist has been well-known since she was a part of the Boom Shaka band before it disbanded.

She is a master of many trades as she is active and performing excellently in the two arms of the South African entertainment industry, Music and Drama.

Thembi Seete‘s birthday is March 25th, 1977, and she was born and raised in Soweto, Gauteng, South Africa.

Many people admire her beauty and intelligence; she can work in a variety of fields and perform an excellent job.

Thembi Seete has a special voice that helped her gain a foothold in the entertainment industry, She was a member of Boom Shaka, a well-known Kwaito group that was on everyone’s lips for six years (1994-2000).

She was a member of the band until it disbanded, forcing her to pursue a solo career. Her music career has flourished since so many people enjoy hearing her sing.

She decided to pursue another career after getting experience in music. She attempted to be an actress before going on to become a radio host. Her multiple talents have helped her establish a media presence and grow her brand. Her first acting opportunity came when she was cast in a small role for the film series, Hijack Stories.

Her short role made movie directors consider her talent and she earned another role in Yizo Yizo, a popular Mzansi drama series that aired on SABC1. After landing the role on the show, she was given the opportunity to perform Sure Ntombazana on the Yizo Yizo 2 soundtrack.

More acting possibilities presented themselves, and Thembi has established herself as a well-known figure. For the next four years, she was cast on Gaz’lam (2000-2004). She played Lerato in seasons one and two of the television series shown on SABC1.

She went on to play the character of Lily in episode three of the SABC1 drama series, Mtunzini.com
She then appeared on Ghosts of the Pasts as a guest star at the start of the second season.

The City Celeb, a renowned website also gathered that In the same year, she participated in a new television series, Zone 14, an SABC1 soccer drama series, in which she played the lead part of Nina Moloi for four seasons on the show.
In 2015, she earned the part of Bongi on e.tv’s Rhythm City, one of the most popular shows on the network.

She went on to pursue a career as a presenter. She has hosted a lot of shows including Jika Majika, Nguwe Na? and she hosted the 6th edition of the Crown Gospel Music Awards.

Bobo ‘Bo’ Seritsane was Thembi Seete‘s fiancée. They decided to take their relationship to the next level after ten years of dating. They were deeply in love, and her then-boyfriend, Bobo, proposed to her in 2012. “Yes!” exclaimed Thembi.

The news quickly spread like wildfire, and fans eagerly anticipated their wedding. The next piece of news was shocking: they had called it quits on their romance. People were curious as to why the pair who appeared to be a good match for each other did not marry.

Four (4) years have passed since then before Thembi made a comment on her Instagram page that she is currently single. Fans and followers who assumed she had married later in a private ceremony were taken aback when they saw the message.

Thembi Seete is active on Instagram. Her handle is @thembiseete_ and she has over 200 thousand followers.

The renowned South African personality, Thembi Seete has amassed according to The City Celeb an estimated net worth of $500,000-$750,000.