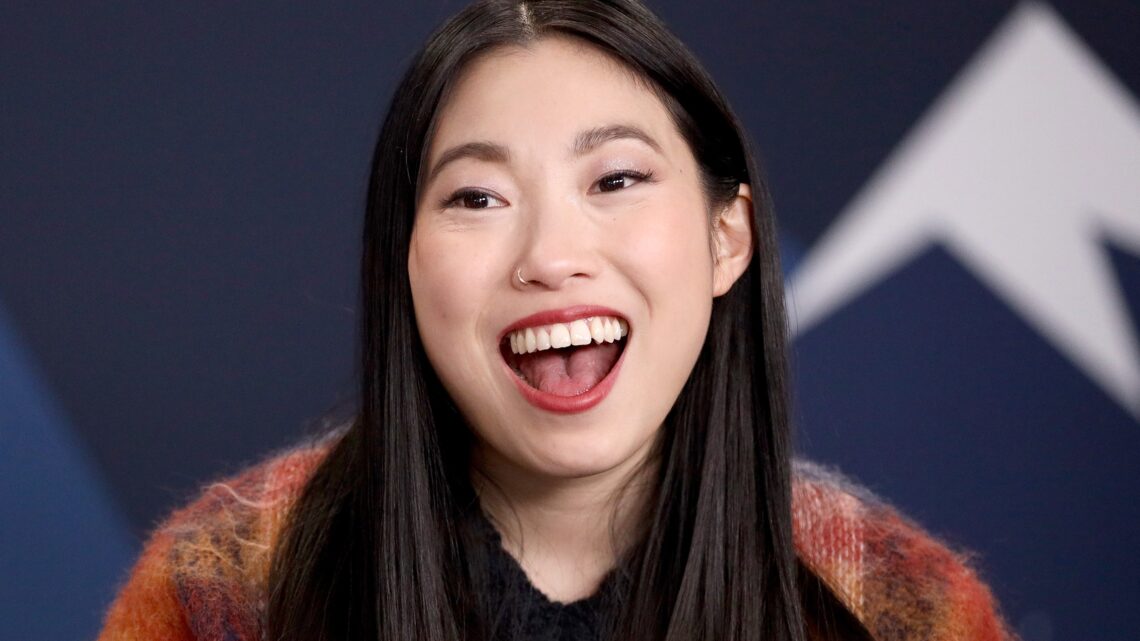 She made a mark in the entertainment industry in 2012 after her rap song titled My Vag went viral on YouTube.

The American rapper now has several albums and numerous songs to her name.

Awkwafina is also a benchmark for the leading role she played in a comedy-drama film titled The Farewell in 2019, which won her the Golden Globe Award for Best Actress In A Motion Picture (Comedy or Musical).

She become the first woman of Asian origin to win the coveted Golden Globe in any lead actress film category.

You might have seen her star as a thief called Ming Fleetfoot in the popular Jungle Cruise film Jumanji: The Next Level in 2019.

She is of Asian descent and holds American citizenship.

She was born to a Chinese father named Wally Lum and a Korean mother, Tia Lum, a painter who immigrated to the United States from South Korea, Asia, in 1972.

She lost her mother to the dreaded pulmonary hypertension when she was four years old.

Awkwafina was raised by her father and paternal grandparents in the small town of Forest Hills, Queensland.

Her paternal great-grandfather was a Chinese immigrant who opened the Cantonese restaurant Lum‘s in Flushing, Queens, in the 1940s.

Awkwafina is an alumnus of Fiorello H. LaGuardia High School. Although she partook in musical extra-curricular activities where she was trained in classical music and Jazz at school, she also learned how to play the trumpet.

Additionally, she attended a higher institution at the Beijing Language and Culture University, where she learned Mandarin.

Likewise, She schooled at a University in Albany, State University of New York, where she studied courses in journalism and women’s studies and graduated in 2011.

Awkwafina started rapping at the age of thirteen. However, It was not until 2012 she became known to the world when she posted her song titled My Vag on YouTube, which made her famous.

The song actually got her fired from her job at a publishing company when her employer recognized her in the viral video.

Nonetheless, she went on to release a solo hip-hop album called Yellow Ranger on 11 February 2014. The album covers 11 tracks, including her previous YouTube hit song, My Vag.

In 2016, Awkwafina collaborated with Margaret Cho in a jam titled Green Tea, a song that jabs fun at Asian stereotypes. She also played as a Disc Jockey at bars in New York to support her career financially.

Furthermore, she released a 7-track Ep titled We Trust on 8 June 2018. The Ep won the 2019 A2IM Libera Award for Best Hip-hop/Rap Album

Awkwafina was cast in six episodes of the third and fourth seasons of a series titled Girl Code.
She played host to a short-form talk show web series called Tawk for a digital production company known as Astronauts Wanted from 2015-2017.

Then in 2016, she was portrayed as a supporting named Christine, who is a member of Kappa Nu in the film, Neighbors 2: Sorority Rising.

In 2018, Awkwafina appeared in an Indie comedy titled Dude, as Rebecca. She also played a significant role in Ocean’s 8 and co-starred in a film titled Crazy Rich Asians as Constance Wu.

Then she hosted an episode of Saturday Night Live on 6 October 2018, becoming the second East Asian-American female entertainer to host the show.

In 2019, Awkwafina starred in a film titled The Farewell, where she played the lead role of Billi and was directed by Lulu Wang.

The film received critical acclaim and subsequently earned her a Golden Globe Award for Best Actress-Motion Picture Comedy or Musical, making her the first Asian to clinch such an award.
Moving on, she starred as an avatar named Ming Fleetfoot in a film titled Jumanji: The Next Level, which recorded a commercial success.

And in July 2019, Awkwafina portrayed Katy in a Marvel Studios’ production titled Shang-Chi and the Legend of the Ten Rings, starring Simu Liu and Tony Leung Chiu-wai.

Awkwafina is currently starring in episode 10 of the television series titled Awkwafina Is Nora from Queens.

Awkwafina created and hosted a web series called Tawk, which received a nomination at the 2016 inaugural Streamy Awards under the category of News and Culture. In addition, it was chosen as the Official Honoree at the prestigious 2016 Webby Awards.

She also won a Golden Globe Award for Best Actress-Motion Picture Comedy or Musical, making her the first Asian to clinch such an award.

In December 2018, Awkwafina was named Female Breakout Star of the Year by Kore Asian Media.

Awkwafina is quite active on various social media platforms. She signed up to Twitter in June 2012 and currently boasts over 53,000 followers on her account.

Awkwafina, despite spending most of her life in America, still has a beautiful Asian look. She has a moderate height of 5 feet 2 inches.

She has beautiful smooth black hair and charming black eyes. She has only one visible tattoo near her elbow.

Awkwafina, despite her influence and popularity, is still single. Her personal life is so private that it cannot be confirmed if she has been in a relationship in the past. However, we’ve never seen Asian beauty with anyone before.

Nora Lum chose the name “Awkwafina” as her stage name when she was a teenager. “Awkwafina” represents her alter ego, which she developed when she was in college. The alter ego was an analogy created to fight Awkwafina‘s quiet and passive nature.

Awkwafina is a well-recognized actress who has taken over the entertainment industry by storm.

The sensational actress and rapper, Awkwafina have accumulated up to an estimated $4 million as net worth.

Awkwafina is a multi-talented individual. However, her ability to portray given roles is second to none.

The Asian-American made her screen debut in six episodes of the third and fourth seasons of a series titled Girl Code.
She has other films and television series credited to her, which are highlighted below: