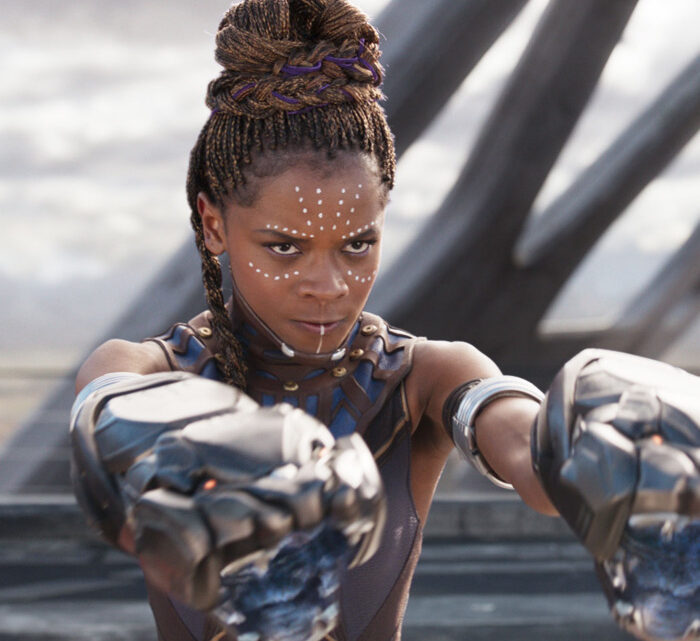 The multiple award-winning actresses rose to stardom after her scintillating performance in a 2015 film titled Urban Hymn.

This was the movie which she was named amongst the 2015 group of BAFTA Breakthrough Brits by the British Academy of Film and Television Arts (BAFTA).

You might have also seen her star in the Marvel Cinematic Universe superhero film titled Black Panther, as Shuri, a film that exposed her talent to the globe and gifted her with several awards and nominations.

Letitia Michelle Wright was born in the capital city of Guyana (a South American country) known as Georgetown on 31 October 1993.

Her family relocated to London, England, searching for greener pastures when she was seven years old.

At the age of 16, Letitia Wright enrolled at the Identity School of Acting. It was the school where her skills in acting were refined.

Letitia Wright performed in school plays just for fun. However, her desire to become a professional actress was developed after seeing a 2006 film titled Akeelah and the Bee.
She was inspired by Keke Palmer‘s exceptional performance in the film, which she described as “resonated.”

Letitia Wright started in 2011 by appearing in two episodes of Holby City and Top Boy. She played a minor role in a film titled My Brother the Devil in 2012.
She gained recognition from Screen International for her performance, which named her one of its 2012 Stars Of Tomorrow.

Letitia Wright got her first lead role in Micheal Caton-Jones’ film titled Urban Hymn in 2015, which brought her prominence in Hollywood. That same year, she was cast in an episode of Doctor Who, and the following year, she started a recurring role as Renie in Humans.

In 2017, she starred in the Black Mirror episode of the series titled Black Museum, for which her performance earned her a Primetime Emmy Award nomination for the Most Outstanding Supporting Actress in a Limited Series or Movie.
Furthermore, she was co-casted in a 2018 film titled Black Pantha, starring as Shuri, who is King T’Challa‘s sister and the royal princess of Wakanda.

The film is a Marvel Cinematic Universe and starred the late Chadwick Boseman, Michael B. Jordan, Danai Gurira, and Lupita Nyong’o.

Letitia Wright won the prestigious NAACP Image Award for Outstanding Breakthrough Performance in a motion picture for her performance.

Also, in 2018, she starred as Reb in Steven Spielberg‘s film adaptation of the 2011 Sci-fi novel titled Ready Player One.

In April 2019, Letitia Wright was cast alongside American singer, Rihanna, in Guava Island‘s short musical film. The film was released by Amazon. Then, she reprised her role as Shuri in yet another superhero movie Avengers: Endgame.

And in November 2018, Letitia Wright was announced would be acting alongside John Boyega in the novel adaptation of Hold Back The Stars.

In February 2020, it was also announced that she would star as twin sisters June and Jennifer Gibbons in a film titled The Silent Twins. However, the date for the release is yet to be announced.

She will also appear in a 2022 film titled Death In The Nile.

For Letitia Wright exceptional works in the film industry, several recognitions have been streaming in for her.

Likewise, she was awarded the Rising Star Award at the 2019 British Academy Film Awards (BAFTA) and gained a nomination for Best Performance by a Younger Actor at the 2019 Saturn Awards for Black Panther.

And was nominated for, Outstanding Supporting Actress in a Motion Picture at the 2019 NAACP Image Awards for Black Panther.

Letitia Wright was an active user of social media not until the winter of December 2020, when she received backlash over a video she shared publicly on her Twitter account where a speaker questioned the safety of receiving the COVID-19 vaccine, in addition to accusing China of spreading the virus and giving transphobic comments.

However, Letitia Wright later came out to give reasons why she shared the viral video while explaining that she wasn’t against taking the vaccines, but it is essential to seek clarifications ” my intention was not to hurt anyone, my only intention,…was it raised my concerns with what the vaccine and what we are putting in our bodies”, she added.

After that, she quit social media entirely.

Letitia Wright is the epitome of black beauty. This represents her impressive body features where she has a moderate height of 5 feet 5 inches (1.65 m) tall and a weight measured at 51kg (113Ibs).

She has beautiful plaited black hair and dark brown eyes to appreciate her good looks.

Letitia Wright was rumored to be in a relationship with fellow actor John Boyega. However, it turned out that the two were just mere friends and nothing more, just as they’ve been for many years.

Aside from that, she has not been linked with a relationship with anyone. With all indications, she is distracted by her career in acting. As a result, she is in no position to commit herself to a relationship at the moment.

Letitia Wright allowed her passion for acting to drive her and started earning at a very young age. So far, she has gathered an impressive $5 million and has an estimated net worth.

Letitia Wright started slowly and rose to become a big star. Her first role on screen was in the not-so-popular series of Holby City and Top Boy.

Fast track till now, she is now known to have starred in blockbuster films, including the popular action hero movie known as Black Pantha, in 2019 coupled with other top-notch movies and television series.