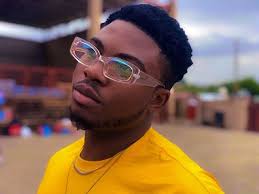 He is widely known across all media spaces as Dreylo or RealDreylo.

The handsome Nigerian is in his early twenties. He is one of the leading Nigerian Influencers on social media, especially Twitter where he boasts over 370k followers.

He dropped his debut single Rappers on the 25th of February 2020, the featured DMW act, Dremo.

Dreylo was born to the family of Mr. and Mrs. Nonyelum in the late 90s.

He came into the world on the 6th of January. He is an Igbo man and hails from one of the states in Southeast Nigeria.

His parents gave him the Igbo name, Ebuka, which means God Is Great. Coming from a devout Christian home, Dreylo was taught good morals, values, and ethics. From an early age, his parents instilled in him the fear of God.

Dreylo was raised in Lagos and lived in the mainland part of the city. As a youngster, he developed a liking for the entertainment industry and would always spend his free time listening to songs and watching movies.

Which was why he was overjoyed when he discovered that he could rap. And he started honing his skill by practicing every day.

Dreylo studied at good primary and secondary schools in Lagos.

He bagged a degree from a university in Nigeria.

As a teenager, Dreylo aspired to be a successful rapper and started composing rap lyrics. He performed some of these rap songs in local shows in South West, Nigeria. He had come up with the nickname while he was still in high school.

Like most of the people of his generation, he is social media savvy. But he has taken his own further by becoming one of the leading Influencers on social media. He is quite popular on Twitter and Instagram.

As a brand influencer, he has been hired by many emerging and established brands to run their ads. He is known for promoting entertainment-related content on his page.

Dreylo‘s status on social media has given him the opportunity to able to push his music career. In the past, he has dropped many freestyle videos, which has helped to grow his fan base. Many people have confessed to loving his rap style and bars.

Dreylo 2019, did the cover of the song, Fvck You, by Kizz Daniel. Success found him in 2020 because he emerged as the winner of the Monster Verse Competition. A competition was hosted by A-Q and Chocolate City.

In February 2021, he dropped his first official single titled Rappers. He featured DMW artiste, Dremo on the song. The song is currently making waves on local radio and TV stations. It also boasts of thousands of streams and downloads.

Dreylo is a very handsome young man with a fit body shape. This is why he has a lot of female admirers. He loves wearing caps; his favorite color is red.

A Christian, he attends a Pentecostal Church in Lagos. He lives in a beautiful duplex on Lagos Island. He is currently in a serious relationship with a beautiful young lady. Though he is yet to post his girlfriend’s pictures, it has been reported that the two are in love with each other.

He runs a musical band and has been booked severally to perform at different events in Lagos.