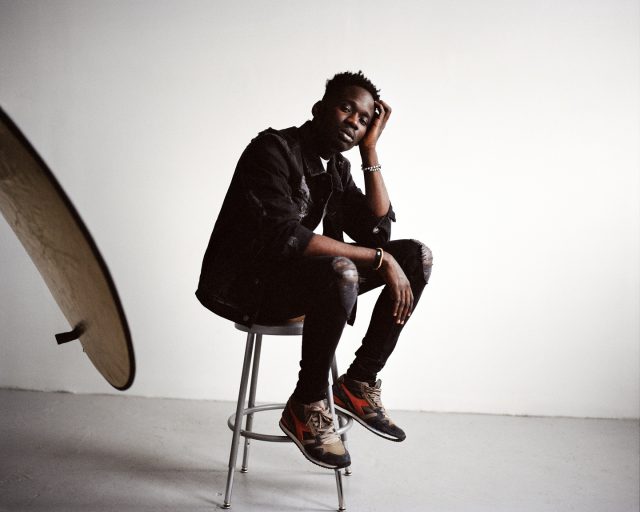 Oluwatosin Ajibade (born on 19 July 1991), popularly known by his stage name, Mr. Eazi, is a Nigerian talented artist and entrepreneur.

He is a Banku Music pioneer, a sound which he describes that is form from the mixture of Nigeria chord pattern and Ghanaian Highlife.

Mr. Eazi left Nigeria and moved to Kumasi, which is located in Ghana, back in the year 2008.

He was in charge of booking young talented artists who perform in college parties back when he was at KNUST.

He revealed that his passion for music started after recording a guest verse on ‘My Life‘, a song that received a lot of positive feedbacks and was trending at KNUST.

After that, the young Nigerian artiste release a debut mixtape titled, About To Blow back in 2013.

He gained his first international audience during the release of his popular song, Skin Tight while he was being signed by Wizkid under Starboy Entertainment.

Mr. Eazi originally hails from Port Harcourt, which happens to be his birthplace and also Nigeria’s largest city in Rivers State, Nigeria.

The young Nigerian talent came from a family of entrepreneurs, his mother owned a small business, while his father was a pilot, who later established his own private consulting company. Mr. Eazi had his primary and secondary education in Lagos state Nigeria before moving to Accra, Ghana to further his education at Kwame Nkrumah University Of Science and Technology (KNUST).

Mr. Eazi started recording music at KNUST, he would often contribute to guest vocals, and one of the songs titled, My Life dominated on the KNUST campus.

Swagger Entertainment was a platform that Mr. Eazi uses to book shows, artists, and also promote music and trending events happening on the KNUST campus.

At Age 23, He came back to his home country, Nigeria, and started an E-commerce platform.

The year 2014, Mr. Eazi gave up his job as a party/event promoter after one of the artists failed to turn up at what turned out to be a huge party.

The year 2016, GMA snubbed Mr. Eazi during the Ghana Music Awards by not nominating him for the Ghanaian-only categories, which according to Quaye statement, Mr. Eazi was not selected due to his nationality, Quaye also stated that Mr. Eazi was only eligible to contest for the African Artiste of the Year category, but the show organizers didn’t give Mr. Eazi a chance as they felt he wasn’t as big as other nominees in that category.

11th of January, 2017, Mr. Eazi received a heavy backlash from Nigerians when the artiste stated that Ghanaian music has great influence over Nigeria music.

On January 12, 2017. Mr. Eazi apologized to his fellow Nigerians over his statement.

After his performance in Ghana Music Awards 2016, Wizkid announced he has signed Mr. Eazi to his record label, Starboy Entertainment. Although Mr. Eazi later revealed that he was never officially signed to the Starboy label but it was just a business deal.

Mr. Eazi is known as the pioneer of Banku Music, a sound that is made from a mixture of Ghanaian Pidgin English and Nigerian patterns. Mr. Eazi is an artist who can be said fits into Afrobeat, Hip-Hop, and Highlife categories.

He is the co-founder of Empawa Africa, management which houses the likes of Joeboy amongst others and has created a platform for other African artists.

As it stands in the year, 2021, Mr. Eazi is currently dating Nigeria’s multi-millionaire, Femi Otedola‘s daughter, Temi Otedola, who is the elder sister of DJ Cuppy.

Mr. Eazi has a large fan base on Instagram, which is a total of over 3.6 Million followers.

The Nigerian-born talented musician and businessman, Mr. Eazi has a total estimated net worth of $2.5 Million US dollars.