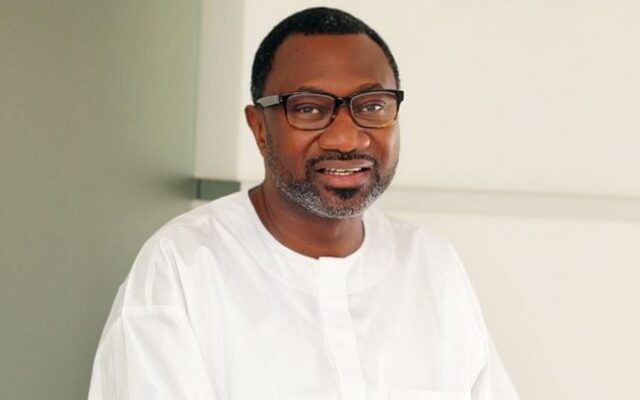 He is the owner of Forte Oil and was also the former chairman of Forte Oil PLC, an importer of fuel products.

He is also the founder of Zenon Petroleum and Gas Ltd, and he owns a large number of other businesses across shipping, real estate, and finance.

He recently invested in power generation as part of the support sector in Nigeria.

Femi Otedola was born in Ibadan, the capital of Oyo State, southwest Nigeria, into the family of the late Michael Otedola, Governor of Lagos State from 1992 to 1993. His mother, Lady Doja happens to be a Nigerian entrepreneur.

He is the second son of four boys from his parents, he was raised in Lagos alongside his three brothers.

While growing up at Lagos, he had an intense passion for the priesthood and was wanting to study at the seminary school to become a priest in the future, although he later declined to venture into priesthood since he couldn’t give up his flair for business.

Femi Otedola regarding his educational background attended the University of Lagos staff school, and then he later proceed to Obafemi Awolowo University, Ile-Ife, Osun state where he acquired his first degree in 1985.

Shortly after he enrolled at Obafemi Awolowo University, Ile- Ife, having acquired some skills in executing a successful business, started working as marketing personnel for his family’s printing business, working the in printing business exposed him to a great deal of business strategy.

In 1994, Femi Otedola established CentreForce Ltd, which was specializing in finance, investments, and trading. He is also the owner of Swift Insurance.

In 2003, he identified an opportunity in the fuel retail market, he secured the finance to set up Zenon Petroleum and Gas Ltd, a petroleum distribution company in Nigeria.

He has served as a member of the Nigerian Investment Promotion Council (NIPC) in 2004, and the same year was appointed to a committee tasked with developing commercial relations with South Africa.

Femi Otedola being the owner and chairman of Zenon Petroleum and Gas Ltd. He invested 15billion in downstream infrastructure development in 2004 and acquired storage depots at Ibafon, Lagos State of which he also acquired a fleet of 100 Daf tanker trucks for 1.4billion In the same year.

In January 2006, he was appointed as a non-executive director of the transnational corporation of Nigeria Plc.

Femi Otedola has made a large number of real estate investments, including an N2.3 billion acquisition of Zenon of Stallion House in Victoria Island in Lagos in February 2007. In the following month, he was appointed chairman of Transcorp Hilton Hotel in Abuja. The same year he was also appointed as the chairman and chief executive of Africa Petroleum through the acquisition of a controlling stake in the business.

Otedola became the second Nigerian after Aliko Dangote to appear on the Forbes list of dollar-denominated billionaires, with an estimated net worth of $1.2 billion in March 2009.

Femi Otedola is the chief executive and president of Sea Force Shipping Company Ltd and was at one point Nigeria’s largest ship owner after he extended the control over the distribution of diesel products.

Femi Otedola not really being a social media freak doesn’t waste most of his time on social media since he is always focused on building his business and only makes use of social media for some business communications.

Bringing to you in detail the personality of Femi Otedola. He is a talented businessman who is bold and confident in his capabilities.

He has carried out a lot of charity works and he has made a whole lot of donations to different organizations in Nigeria. He’s having interests and hobbies in doing what suits him best.

He is a father of four; three girls and one boy. Femi Otedola is also fantastically and happily married to Nana Otedola, a business visionary.

Having worked really hard over the years and has become a celebrated business mogul, Femi Otedola has a generated estimated net worth of $1.8 billion as was confirmed by Forbes.