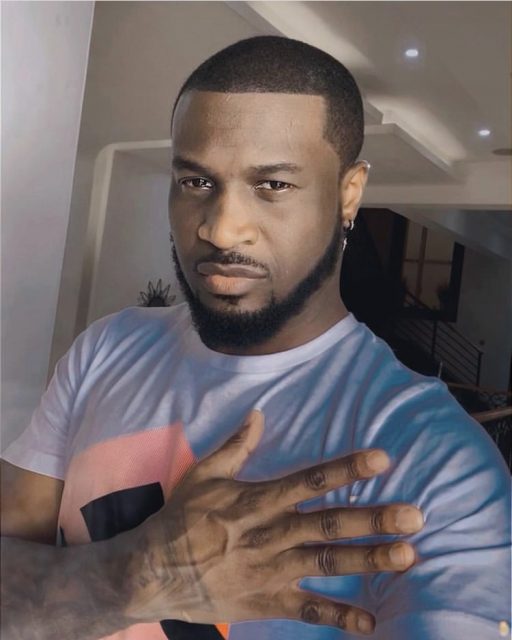 He is a prominent Nigerian singer, writer, dancer, and one-half of the popular duo known as P-Square.

He was born on the 19th of November in the year 1981 along with his twin brother. He is the Twin brother of Paul Okoye who is referred to as Rudeboy but they broke after the conflict between them.

He has been actively involved in directing his own videos as a solo act. He is popularly called Mr. P by fans and family.

He currently runs a bet and raffle draw ticket called “ZOOM” and he is the present Ambassador for Tecno Mobile. He has won several awards as a credit to his career.

Peter Psquare left Psquare group after he sent a termination letter to his group through his lawyer in the year 2016.

Due to some internal family issues which also contributed to peter and Paul splitting, he and his brother also divided their properties among themselves which affected their Fan base.

Peter Okoye typically called Mr. P who was born in Jos, Plateau State in Nigeria happens to hail from Anambra State in the Eastern part of Nigeria.

He was born into a large family comprising of seven children. His interest in music started while he and his twin brother were still in secondary school where they both started performing as dancers.

According to him; Michael Jackson influenced his career and that of his brother. When he started his career as a teenager he and his brother used various names before choosing the iconic name PSquare during their days as a student of the University of Abuja (UNIABUJA).

Peter Okoye was reportedly born in Jos, Plateau State in Nigeria along with his brother, Paul Okoye, where he completed his primary school education and obtained his first leaving certificate with his twin brother.

He then further move to Saint Murumba Secondary School, a catholic school which is also located In Jos. He graduated from secondary school with his brother.

Peter graduated from the University of Abuja with a B.sc in Business administration.

Peter Okoye started his career as a teenager when he started dancing and performing with his friends along with his brother.

He and his twin brother came together to form the popular P-Square and they were discovered as a team by their first manager named, Howie T. Mr. P as one of P-Square before they broke up dropped his album in the year 2003 which was titled, Last Nite.

It was an album that was sponsored after he and his brother Paul Okoye won the Grab Da Mic competition in the year 2001.

He also drops songs like Cool it Down, For my Head, and Look into My Eyes. Peter started his career along with his brother Paul under Square Records and they were both managed by their elder brother called, Jude Engees.

Peter Okoye has starred in a movie called Lionheart.

Peter Okoye is one of the most followed Nigerian public figures with active social media fans. He has over 11.1million followers on Instagram.

Peter Okoye PSquare is presently married to Lola Omotayo Okoye with two kids known as Cameron Okoye who is presently in the Barcelona Football Academy and Aliona Okoye.