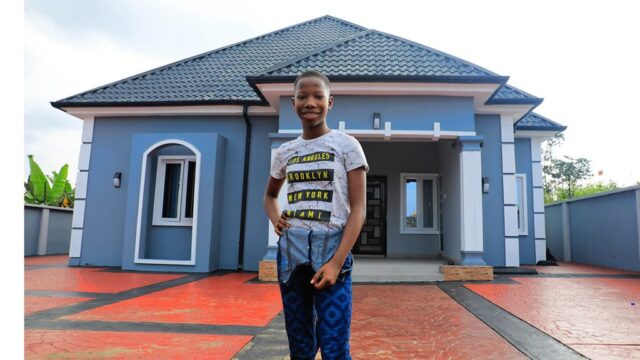 After making her debut in the 34th episode of Mark Angel‘s Comedy skit, she gained fame for her infamous role in an episode titled, This is Not My Real Face Oh.

So far, the Port Harcourt-based youngster has bagged numerous awards both domestically and on the international scene.

Recently, she won a Nickelodeon Kids’ Choice Award for Favorite African Social Star and also got featured in a Disney Film. Her huge fan base on social media includes over 600,000 followers on Instagram and over 5 million followers on Facebook.

Award-winning comedienne, Emmanuella Samuel was born to Imo State indigenes mother and father; James Samuel and Cynthia Samuel, on the 22nd of July 2010. Her parents reside in the South-South region, particularly, Port Harcourt in Rivers State.

The emerging toddler wasted no time in announcing her prodigious character, featuring in a brief comedy clip only aged five.

Due to the location of her community and her age at the time, there were doubts about how the public would react to her first appearance in front of the cameras. However, Emmanuella silenced doubters in no time after featuring in a Mark Angel Comedy video titled, My Real Face. Her parents were also supportive and spurred their baby girl from one fit to another, eventually launching her into stardom quite early.

Emmanuella is currently a pupil at Brighton Gate Academy School located in Port Harcourt, Rivers State. With so much to offer in the coming years, fans and well-wishers alike will certainly see more of the talented kid.

Emmanuella‘s early success was no accident. Her career as a comedienne began during a holiday with family members where she was privy to meet Mark Angel; an upcoming skitter at the time.

Mark Angel, who needed children to play a role on his next episode of a comedy series had subjected a set of children to some tests. However, they all failed to make the scratch as they couldn’t memorize the scripts given to them. Emmanuella, however, was exceptional, memorizing her role and imploring Mark to convince her parents to feature her alongside his comedy team.

She made her debut in 2015 in an infamous scene titled, Who Mess, and became popular for an episode called, This is Not My Real Face Oh. The short video clip quickly gained ground on social media and received huge circulation across the country. Emmanuella has gone on to star in numerous episodes alongside Mark Angel in his comedy skits.

In 2018, Emanuella got an honorary invitation from Bukola Saraki to the National Assembly after she landed a role in a Disney film. She was also hosted in 2016 by CNN and has also appeared in several interviews since making her debut.

The kid comedienne is also one of the most influential youngsters in Nigeria with huge followership on both YouTube, Instagram, and Facebook. On the gram, Emmanuella‘s page is followed by more than 600,000 persons and over 5,000,000 followers of her Facebook page.

Emmanuella currently resides with her family in Port Harcourt and hangs out with both her on-set pals and off-screen friends. Opinions of her relationship with Mark Angel have been somewhat divided; with many claiming that she is his niece while others have stated that they are cousins.

A few months back in 2021, Emmanuella took to Instagram to announce the completion of a house she built for her parents. The gesture earned her the respect of many and was much talked about in 2020. She also posted a picture of herself in a convey aircraft as well as other pictures of her time with friends and family.

Emmanuella is still very much a kid, she has no boyfriend, spouse, or husband to be.

It came as no surprise when accolades starting pouring in for the young Nigerian comedienne.

In 2016, she won an award in the inaugural edition of the Sub-Saharan African YouTube Awards bagging the Top Subscribed Creator from YouTube Award. Emmanuella also took home the Best New Comedienne & Princess of Comedy Award at the Afro-Australia Music & Movie Awards.

Her talent was also rewarded a year earlier; winning the G-Influence Niger Delta Special Talent Award, while earlier the year of 2021, she won the Nickelodeon Kids’ Choice Award for Favorite African Social Star.

The young prodigy, Emmanuella commands so much respect and affluence due to her success in the comedy industry. Her net earnings have been estimated to rack her a net worth between $150,000-$500,000; most of which comes from her influence on social media through views of her comedy skits.