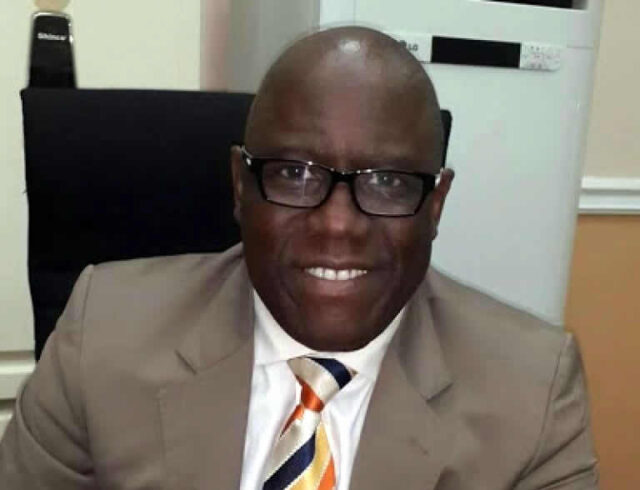 He is the founder and eponym of a label known as Kennis Music and serves as the CEO alongside the renowned Dayo D1 Adeneye. They are the proud owners of a popular Lagos-based radio station, Kennis 104.1 F.M, Lagos.

This man has engaged in numerous entrainment endeavors, making him one of Nigeria’s most celebrated entrainment personalities.

Kenny Ogungbe was born in the commercial city of Lagos on 10 September 1970. He is the son of Mr. and Mrs. Ogungbe, both of whom originate from the western part of Nigeria. He’s Yoruba by tribe.

He lost his mother, Otunba Letticia Onojoke Ogungbe, at the ripe age of 80. Her death occurred on a faithful evening in the Federal Capital Territory, Abuja.

Kenny Ogungbe works as a DJ, music producer, TV presenter, and music executive. He teamed up with another media personality Dayo Adeneye also known as D1, as host to a music program called AIT Jamz. This program, which aired on AIT in the late nineties (later becoming PrimeTime Jamz on NTA), made him quite famous.

The ace radio personality and record label manager rose from Assistant General Manager in 1993 to Managing Director in 2000. He has extensive experience and is well-known in the Nigerian entertainment industry.

He has worked with, changed the careers of, or discovered The Remedies launching the solo careers of Tony Tetuila and Eedris Abdulkareem, 2Baba (Then 2Face ), Sound Sultan (producing his first two solo albums), and Oritse Femi, among others.

Kenny Ogungbe has extensive experience and is a well-known figure within the entertainment industry. He is the Chief Executive Officer and co-founder of Kennis Music International and a senior partner in Primetime Entertainment, Nigerians’ foremost entertainment company. He helped revive Nigeria’s music industry, taking it to a new level and putting Nigeria on the global musical map.

In 2012, Kenny Ogungbe was appointed Managing Director of one of the biggest radio stations in Nigeria, Raypower FM. This was primarily due to his enormous contributions to the FM. He is also a Non-Executive Director of DAAR Communications Plc.

In Nigeria, they’ve successfully changed the game as the duo (Kenny and Dayo) gave Nigerian music a new spin and threw up a new generation of stars such as Eedris Abdulkareem, 2baba, Tony Tetuila, Eddy Remedy, Slam, Paul Play Dairo, KSB, to mention a few.

This development in the music industry is partly responsible for Nigeria’s dominance and Africa and inroads into America, the UK, Europe, and globally.

Veteran OAP Kenny Ogungbe is quite active on social media with numerous followers.

Despite being in his fifties, Kenny Ogungbe remains a handsome young man and looks strong for his age. His eyes are dark brown, and his head is completely bald.

Kenny Ogungbe is currently married to a beautiful woman named Bolajoko Ogungbe. The union is blessed with beautiful children. His marriage has been without controversies, as far as we can gather.

Kenny Ogungbe is a lover of good music and healthy food. He also likes entertaining people and bringing smiles to the faces of his fans.

Kenny Ogungbe has been in the entertainment scene for over two decades, working as the CEO of a record label and an OAP.

Kenny Ogungbe‘s hard work and consistency prove his estimated US$1 million net worth.