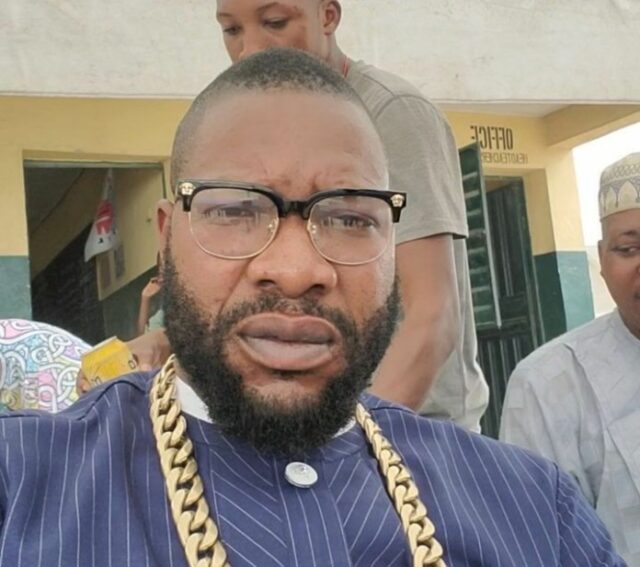 Alhaji Ganiyu Oyedepo is known in the Nollywood industry and Lagos social circles by the nickname Koko Zaria.

The father of four is a talented Nollywood Actor, NURTW chieftain and entrepreneur based in Lagos, Nigeria.

Koko Zaria was born in 1970 on the 20th of May to the illustrious family of Oyedepo in Omu Aran, Kwara State.

His father Alhaji Oyedepo is the elder brother to the popular Nigerian clergyman, Bishop David Oyedepo.

Dr. Oyedepo is the founder and president of Living Faith Ministries, one of the biggest Christian ministries in the world. Dr. Oyedepo is also the richest pastor in Nigeria.

Thus, this makes Koko Zaria the nephew of the influential pastor.

Koko Zaria‘s parents have passed away many years ago.

The young Ganiyu left Kwara State for Lagos when he was in his early twenties in search of greener pastures.

On his arrival to Lagos, he joined the transport business and union and quickly rose through the ranks to become one of the top men of the union.

At the moment, Koko Zaria is a National Union Of Transport Workers (NURTW) Chieftain. He is currently the deputy chairman of the Lagos chapter of the union. His boss is Alhaji Musiliu Ayinde Akinsanya alias MC Oluomo. MC Oluomo is a popular Lagos socialite and politician.

Koko Zaria is also a politician and he is affiliated with the ruling All Progressive Congress (APC) party.

He has starred in movies such as Atunida, Kesari, Omogara, Eyan Re and lots more.

He is the producer of the movies Omo Oshodi and Koko Zaria.

As an entrepreneur, he has investments in the transport business, real estate and hospitality business.

In November 2020, he launched open a five-star hotel in Ilorin, Kwara State. The hotel is reportedly worth over 500 million naira. The hotel is named Zargarza Hotel and Suites.

At the launching event of the hotel, top actors, actresses and politicians such as Taiwo Hassan, Ibrahim Yekini, MC Oluomo came to celebrate with Koko Zaria. MC Oluomo was the chairperson of the day.

Koko Zaria was involved in a scandal years back when it was alleged that he was having an extramarital affair with Nollywood actress, Awele Odita.

This news was said to have caused a ruckus in his marriage but it was soon settled and his wife, Ajoke came to terms with the fact that he wanted to take a second wife. Koko got married to Awele in a private ceremony.

Koko Zaria clocked 52 years old on the 5th of May and he held a big party to celebrate the event. The party was attended by several celebrities and politicians. He is a devout Muslim. He is a lover of good tattoos.

The enterpreneur is a polygamist. He has two wives. His first wife is Oyinda Ajoke Oyedepo. She is the mother of his two daughters, Leeyah and Oyindamola Oyedepo (alias Zargarza Baby).

Leeyah clocked 11 on the 30th of December while Oyindamola’s birthday is on the 14th of September. She is already a teenager.

His baby mama and later wife, Awele Odita delivered a bouncing baby boy in 2017. The boy whose name is Khalid clocked 4 years old on the 11th of December.

Awele had allegedly given birth to conjoined twins prior to Khalid‘s conception but the twins died shortly after.

Koko Zaria also has an older daughter from a previous relationship even before he got married to his first wife.

Her name is Kaosara Omolabake Oyedepo. She is in her early twenties and a graduate from one of Nigeria’s foremost universities. She is currently based in Canada.

Koko Zaria has grown into a social media personality and he is very active online. His official Instagram handle is @kokozaria_americaboy

He has over 386k followers on the platform.

Due to his earnings from his transport and real estate businesses, Koko Zaria has amassed wealth for himself.

He has an estimated net worth of two million dollars which has been projected to increase with time.