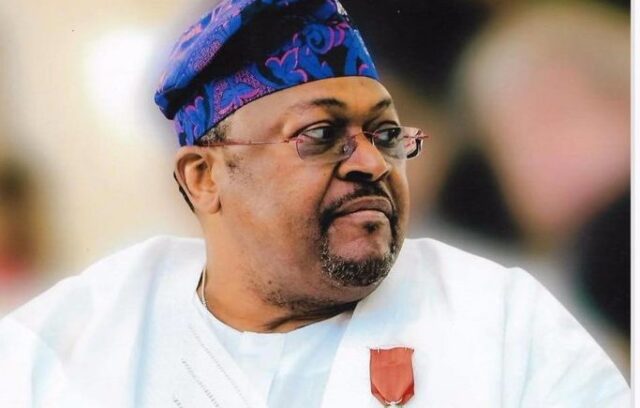 He is a billionaire and the third richest person in Africa behind Nassef Sawiris of Egypt and Aliko Dangote of Nigeria.

He is the founder of a telecom company known as Globacom, which stands as Nigeria’s second-largest telecom operator and has a presence in other west African countries such as Ghana and Benin republic.

Mike Adenuga was born in the city of Ibadan, Oyo State, Nigeria, on 29 April 1953. He is of Yoruba ancestry. He has two siblings whose names are Demola Adenuga and Otunba Adenuga. Is he related to Wale Adenuga? The answer is no and there’s no verified publication to backup this claim.

His father, the Oloye Michael Agbolade Adenuga Sr, served as a school teacher, while his mother, Omoba Juliana Oyindamola Adenuga, was a businesswoman of royal Ijebu descent.

Mike Adenuga earned his secondary school education at the Ibadan Grammar School, Ibadan, Oyo State, Nigeria, and attended Comprehensive High School, Aiyetoro, for his Higher School Certificate (HSC). He worked as a taxi driver to help fund his university education back then.

His hustle paid off as he graduated from Northwestern Oklahoma State University and Pace University, New York, respectively, with degrees in Business Administration.

Mike Adenuga made his first million in 1979, at the age of 26, selling lace and distributing soft drinks. In 1990, he was handed a drilling license. In 1991, Consolidated Oil struck oil in the shallow waters of Southwestern Ondo State, becoming the first indigenous oil company to do so in commercial quantity.

Furthermore, he was issued a conditional GSM license in 1999, though it was revoked. Notwithstanding, he received a second one when the government-held another auction in 2003. He immediately launched a telecom company called Globacom, and operation spread quickly and started challenging telecom giant and biggest rival MTN Group in the communication Industry.

Globacom launched its services in the Benin republic in 2008 and has continued its spread across Ghana and Côte d’Ivoire, with more licenses currently being prospected in other West African countries.

Mike Adenuga‘s hard work did not go unnoticed as he was named African Entrepreneur of The Year at the first African Telecoms Awards (ATA) in August 2007.

In May 2015, he made a sensational takeover bid to purchase an Ivorian mobile telecom operator Comium Côte d’Ivoire for US$600 million.

Mike Adenuga has received numerous awards, honors, and recognitions, both national and international, recognizing his great deeds. In 2012, the Globacom CEO was named the Grand Commander of the Order of the Niger (GCON) by the government of Nigeria, led by the then-president Goodluck Ebele Jonathan.

In addition, he holds a Yoruba tribal chieftaincy as the Otunba Apesin of the Ijebu clan. In 2018, he was decorated with the insignia of a Commander of the Legion of Honour by President Emmanuel Macron of France.

In 2019, Mike Adenuga was cited as one of the Top 100 most influential Africans by New African magazine and was named African Entrepreneur of The Year at ATA in 2007.

The Nigerian business mogul was also recognized with the Companion of the Star of Ghana (CSG) in 2018 and named amongst the 100 distinguished and Eminent Nigerians Centenary Awards in 2018.

Mike Adenuga has two wives, Adefolake Emilia Adenuga and Titi Joyce Adenuga, with seven children (5 girls and two boys). His first wife is in between the two.

His sons are Michael Babajide Adenuga, Eniola Adenuga, and Paddy Adenuga, whereas his daughters are Abimbola Adenuga, Adetutu Oyindamola Emilia, and Bella Disu.

Forbes has estimated Mike Adenuga‘s net worth at US$6.8 billion. He is currently the third richest man in Africa, earning his income from his oil companies, business ventures, and telecom company Globacom.

Jumpstart Your Music Marketing in 2022