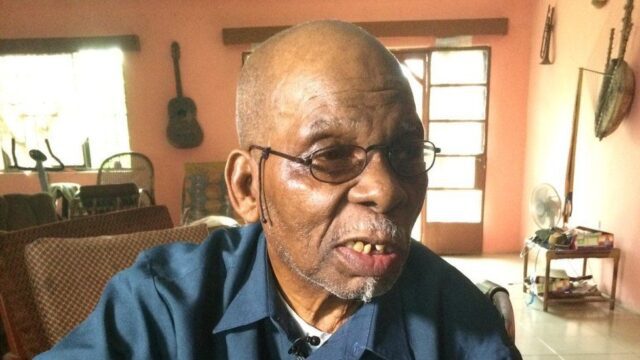 He is musically skillful and can play several instruments, but was, however, best known as an alto saxophonist playing a combination of Afrobeat and jazz.

Peter King is perhaps more prominent in Europe and America than in Nigeria for his “Miliki Sound” on the record. A Soulful Peter King, where he played famous classics such as “Sincerely“, “Just Because,” and “We Belong Together.”

Peter King was born in Enugu state, Southeastern region of Nigeria, in 1938 but was raised in Lokoja, Lagos, and Port Harcourt.

He had an interest in music from childhood, which was why in 1957. In Ibadan, he joined the Roy Chicago band, playing the maracas and then the conga drum.

Then he moved to other bands in Ibadan, Oyo state, and then Lagos, playing the double bass, drums, and alto sax.

In 1961, he moved to London, England, where he studied at various music schools, including Trinity College of Music.

While in London, Peter King linked up with a drummer named Bayo Martins and a trumpeter called Mike Falana to create a group known as the African Messengers group.

The group performed at festivals and clubs while serving as the backup band for acts such as The Four Tops, Diana Ross, and The Temptations. The African Messengers also recorded many 45rpm records. Their song- “Highlife Piccadilly”, a fusion of Highlife and jazz, became a hit.

Peter King went on to form another band called The Blues Builders, with which he toured Europe and Northern Africa.

Then he returned to his home country, Nigeria, in 1969, and together with his group called The Voice of Africa, he performed on the war front during the Nigerian Civil War. Returning to London in 1971, the veteran toured Europe, America, and Japan with a new group called Shango.

Peter King assembled and arranged a big band to back a singing group known as Boney M on their first live concert tour across Europe in 1977. The iconic musician recorded nine studio albums between 1975 and 1978 and wrote music for several plays and television shows.

In 1979, he returned to Nigeria once more and formed a band called the P.K band. He composed several musics for soap operas and recorded three further albums. In the early 1980s, Peter King and his P.K. Band performed on the NTA and at the National Museum, Lagos, for three years.

Additionally, Peter King played in the Sonny Rollins–Gene Ammons–John Coltrane tradition. The Nigerian has a unique tone, flawless articulation, and a new turn of mind in improvisations. It stands as the leading tenor saxophone voice from the Nigerian highlife and afrobeat traditions.

Peter King combined afrobeat with a funk style similar to the legendary James Brown about his music style. Critics acclaimed his album titled Shango. Opening with a simple flute melody, tambourines are inserted, followed by complex duets between horns and looping guitar riffs.

Peter King founded his School of Music in 1982 in a three-room building in Maza Maza. In the beginning, it had about 30 students, though since then has expanded greatly and is now situated in Badagry, Lagos State, Nigeria.

The school has lecture halls, rehearsal rooms, an assembly-concert hall, and hostel facilities. It has been assisted by Canadian musicians Oliver Jones and Archie Allen and is greatly supported by the French government.

More than two thousand students have graduated from the school since 1982. The school offers practical tuition and grants certificates and diplomas. It prepares students for the professional examinations of Associate, Licentiate, and Fellowship of the Trinity, Royal and London Schools of Music, and the Guildhall School of Music and Drama. Popular Nigerian singer, Aṣa is one of the notable alumni of Peter King‘s school of music.

The French Ambassador in Nigeria, in January 2007, inaugurated the new facilities of the Peter King school of music at Badagry, Lagos State, Nigeria.

Peter King lives a healthy lifestyle and has impressive body features, including his weight of 67 Kg and his height of 1.79 m. His overall body measurements are 42-29-28. His hair is black, and so is his eyes.

Peter King has managed to keep his private life away from the media. It is still unknown if the veteran singer is married or otherwise. Also, it is not known if he has fathered any child. However, this section will be updated as soon as information regarding this pops up.

Peter King made quite a considerable amount of money during his career days as a musician.

However, his estimated income is not documented. He makes most of his income from album sales, concert performances, and tuition fees from his musical school. His net worth is not recorded anywhere.