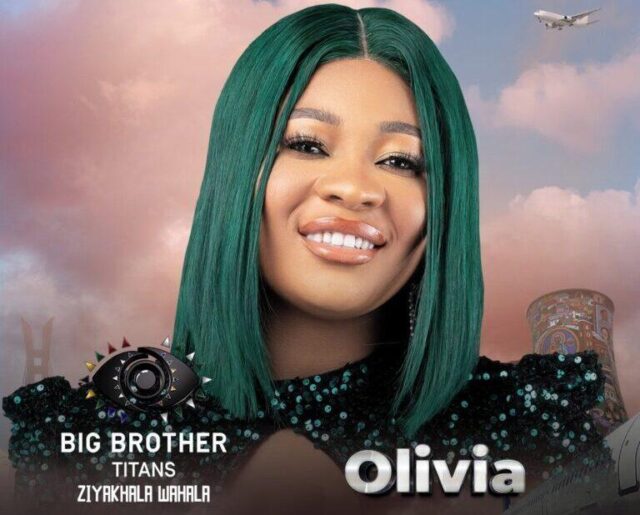 Olivia Chioma Okoro (born in 1999) is a Nigerian actress, model, content creator, and brand influencer. The gorgeous creative is a reality TV personality.

She is a Housemate in the Big Brother Titans Reality Show. Olivia Okoro was unveiled as one of the 20 housemates in the show on the 14th of January, 2023.

Olivia Okoro was born in the South East region in 1999. She was born to Nigerian parents who hail from the Igbo ethnic group. She is an Igbo woman who speaks her language fluently.

She is an indigene of Imo State. Olivia Okoro was born and raised in Owerri, the capital of Imo. She comes from a Christian household with strong traditional values. Growing up, she was taught the customs and traditions of her ancestors by her parents.

As a little girl, Olivia Okoro spent her holidays at her grandparents’ houses, where she got to play with her many cousins. It was during this period that she developed her love for acting. Her interest in acting was deepened by watching several Nollywood movies as she grew older.

Olivia Okoro‘s love for acting made her join the Drama society in secondary school and the Drama unit in Church. As a teenager, she was cast to play leading and supporting roles in many school plays and dramatic gospel ministrations.

Olivia Okoro‘s parents ensured that she received a good education. She studied at leading public schools in Owerri City, Imo State. She passed out of secondary school in 2015 after earning good grades in her SSCE.

She is an alumnus of Federal Polytechnic Nekede.

While pursuing her studies as an undergraduate at Federal Polytechnic Nekede, Olivia Okoro also explored her creative abilities. She joined a Theater Troupe in the institution, where she participated in many stages plays. As a member of the theater company, she was able to improve her acting and stage performance.

Olivia Okoro decided to leverage her beautiful looks by becoming a model. She signed up with a local modeling agency in Owerri and began securing modeling gigs. She worked as a model for many brands in the South East region. After graduating from Federal Polytechnic Nekede, she moved to Lagos in search of better career opportunities. Having built her portfolio since her undergraduate days, Olivia Okoro was able to secure six-figure modeling gigs in Lagos City. Several creative directors hired her to work on commercials for brands.

Olivia Okoro also continued to pursue her dream of becoming a Nollywood superstar. She attended many film auditions held in Lagos. Luckily for her, she was selected to play supporting roles in some Nollywood films. She has worked mainly with up-and-coming filmmakers in the country.

She has also built a career as one of the leading Content Creators of Igbo extraction. Olivia Okoro‘s famous female content creator work has helped her become a Brand Influencer. Many brands have hired her to use her platform to grow their social media presence and customer reach.

When the Big Brother Titans Reality Show auditions began in the latter part of 2022, Olivia Okoro decided to give it a shot. She saw the show as a bigger platform to showcase her talent to the African audience. She auditioned for a spot in the reality show and was selected by Judges.

Olivia Okoro is a thriving content creator and brand influencer. She has over 19.4k followers on Instagram.

Olivia Okoro is 24 years old. The gorgeous celebrity comes from a humble background. She adores her family and doesn’t hesitate to visit them occasionally. She spends her free time clubbing or attending social events when she is not working. She is a devout Catholic and attends mass regularly.

She is a fun-loving person and has a charming personality. And this can be seen in her work as a fashion designer. Olivia Okoro works as a fashion consultant and stylist for many celebrities and middle-income earners in Nigeria.