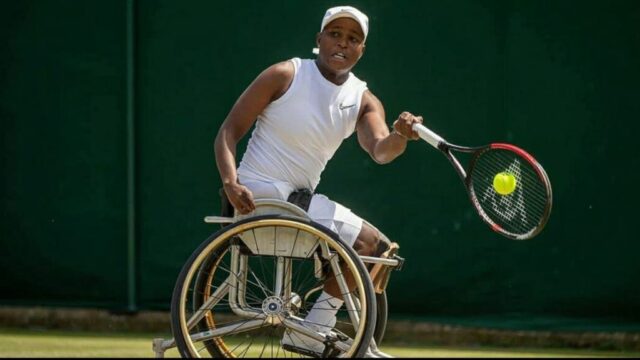 Kgothatso Montjane is a skillful South African wheelchair Tennis player. She was born on the 3rd of June, 1986.

She was born in Seshego, Limpopo, in South Africa. Her appearance in 2018 made her the first black South African to compete at Wimbledon.

Even though she is disabled, her passion and love for tennis make her outstanding. She was named South Africa’s disabled sportswoman of the year at three (3) different times (2005, 2011, and 2015).

So far, Kgothatso Montjane has won 29 singles matches, and she has won other tournaments, among which we have wheelchair Belgian open and Swiss open.

Kgothatso Montjane was born in Seshego in the peripheral of Polokwane, Limpopo in South Africa, on the 3rd of June 1986.

She was born with a congenital disorder called amniotic band syndrome, which affected her hands and foot. The second foot got amputated when she was 12 years of age.

Being disabled, all other children in her neighborhood despised her and would not want to play with her. She was seen as different as she could not run or jump like all other kids.

It was not easy for Kgothatso Montjane as she is from an impoverished background. Her condition and the distance to her school made her give up on school before she knew of a boarding school for the disabled.

With light sports facilities and equipment available, she started her career as a tennis player. Her parents, in this challenging time, did not give up on her.

They gave her the full support she needed by sending her to school and encouraging her for a bright future.

From childhood, Serena Williams has been her role model and the tennis player she cherished the most. She relentlessly worked to improve herself and her tennis skill.

Kgothatso Montjane is a successful Tennis player ranked by ITF to be among the top ten (10). In 2005, she made her highest rank ever as fifth (5th) in the world.

She was also named South African disabled sportswoman of the year in 2005, 2001, and 2015 consecutively.

She participated in three of the four Grand Slam tournaments: Australian open, Garros open, and US open, and she was able to get to the quarter and semi-final in the singles. In addition, she got to the semi-finals of all the doubles tournaments.

Kgothatso Montjane was a member of the South African team at the 2008, 2012, and 2016 summer Paralympics, but she could not win any medal. In 2009 and 2011, she was also the participant representing South Africa in World Team Cup. She struggled to qualify for the prestigious Wimbledon Tournament in 2018, which made her the first black South African to be eligible in history.

In the same year, she also participated at the US Open and, as a result, became the first African wheelchair tennis player to be eligible for all four Grand Slam tournaments in the same year.

The renowned and celebrated South African, Kgothatso Montjane is not married, she is single.

African tennis celebrated figure, Kgothatso Montjane is estimated to be blazing a net worth of $520,000.