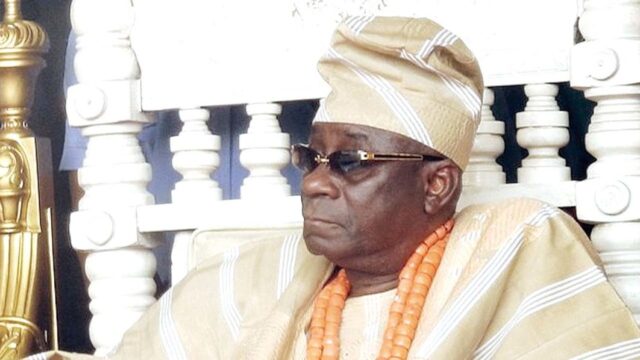 The 77-year-old is a retired Assistant Inspector-General of Police and currently serves as the Oba of Lagos.

Recently, he steered up controversy after a large warehouse of stacked palliatives was discovered within his walls during the #EndSars protest.

He is also a highly regarded person in the Nigerian Law School and a member of the Nigerian Institute of Management.

Rilwan Akiolu known professionally as Oba Akiolu was born on the 29th of October 1943.

He grew up in the Southwestern region of Nigeria; particularly Lagos State. At a young age, Akiolu exuded an appreciable level of brightness.

A quality that eventually made him turn out successful.

He also studied Law at the prestigious University of Lagos, Akoka, Lagos State, and received a Bachelor of Law degree (LL.B).

In 1970, Oba Rilwan Akiolu joined the Nigerian Police Force and served in various capacities until 2002. During that time, he grew up the ranks and was eventually named as Assistant Inspector General of Police in 1999, before retiring three years later.

Rilwan Akiolu is also a highly regarded person in the Nigerian Law School and a member of the Nigerian Institute of Management.

Following the death of Oba Adeyinka Oyekan II, who passed away on March 1, 2003, Rilwan Akiolu was selected by the Lagos traditional kingdom kingmakers to become the 21st Oba of Lagos and was confirmed by the Lagos State Government on May 23, 2003, to succeed the late ruler.

On the 9th of August, 2003, Rilwan Akiolu was crowned the 21st Oba of Lagos; and has ruled in that stead for almost two decades.

After Oba Rilwan Akiolu‘s coronation, the Akinsemoyin Royal Family of Lagos had tabled a court case with accusations made on denial of access to the throne.

In April 2015, Oba Rilwan Akiolu also steered up controversy after he swore publicly in a meeting with Igbo leaders in Lagos State that Akinwunmi Ambode would be named the next Governor of Lagos State. His comments which stated that ‘anyone who went beyond his will would die inside the Lagos-Lagoon’, ” were met with great dismay by many.

During the #EndSars protest in the last quarter of 2020, Oba Rilwan Akiolu‘s palace was broken into by angry mobs who discovered a large warehouse of palliatives reportedly meant for the people of his community. A video of the incident also attracted derogatory comments from social media users after its circulation.

His ruling staff was also carted away by certain youths during the rampage; spurring the Lagos Ruling House to demand its return, for peace and order to be restored.

Oba Rilwan Akiolu is a devoted Muslim and a proud father to many children and grandchildren. He is also married to four wives; with his first known as Olori Titilola Akiolu.

His possessions include a fleet of elite cars such as Rolls Royce Phantom, Mercedes Benz S550, a Toyota Prado amongst others. Prior to the attack, his palace was estimated to be worth $5,000,000.