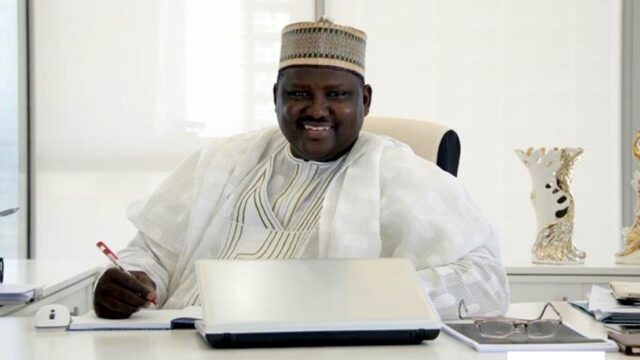 He was born and raised in his hometown, Biu Local Government Area of Borno State, Nigeria.

The ex-pension boss was charged by the Economic and Financial Crimes Commission (EFCC) in 2015 and was declared wanted at the time.

Last year, he was also arraigned by a court alongside his son, Faisal Maina for money laundering charges before his extradition from the Niger Republic.

This was made possible after a collective effort from the Nigeria Police Force, INTERPOL NCB, Abuja, and their Nigerien counterpart.

Abdulrasheed Maina spent most of his early years in the Northern part of Nigeria.

However, he departed to further his education at other locations outside his hometown.

After completing his basic and secondary school levels, the ex-pension boss, Abdulrasheed Maina furthered in the University and finished with impressive results.

Abdulrasheed Maina was added to the Pension Reform Task Team (PRTT) and chaired the team from 2010 to 2013.

However, he was charged by the Economic and Financial Crimes Commission (EFCC) in 2015 alongside a former Head of Service, Steve Oronsaye, Osarenkhoe Afe, and Fredrick Hamilton before a Federal High Court on a 24-count charge for procuring fraud and acquisition by false pretense.

At the time, the ex-pension boss was declared ‘wanted’ and reportedly went into hiding after a warrant was issued for his arrest by the Nigerian Senate.

Two years later, Abdulrasheed Maina got appointed as the acting director of the Human Resources Department. This came as a surprise to many and raised a lot of questions from political critics. Eventually, he was fired by President Muhammadu Buhari that same year.

With his reputation hanging in the balance, Abdulrasheed Maina was reportedly cleared to run as a governorship candidate for Borno State in 2019. The months which followed saw the arraignment of Maina alongside his son, Faisal for money laundering charges.

The Nigerian Police Force eventually announced the arrest of Abdulrasheed Maina in Niamey, the Niger Republic in December 2020; after a collective effort from the Nigeria Police Force, INTERPOL NCB, Abuja, and their Nigerien counterpart.

He was extradited to Nigeria from Niamey, Niger Republic to face charges in court.

Abdulrasheed Maina is married to Laila Maina and currently has a son, Faisal Maina.

His son was also charged on grounds of fraud allegation of about 58 million naira and the use of accounts that were termed as conduits for illegal transactions.