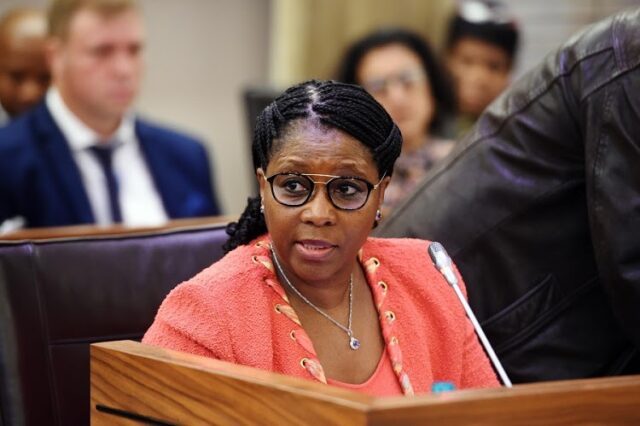 Ayanda Dlodlo (born 22 May 1963 in Soweto) is a popular South African public servant.

She became one of the members flying the African National Congress party flag.

She has served as a cabinet minister. Currently, She is serving as the Minister of State and Security in president Cyril Ramaphosa’s cabinet.

Ayanda Dlodlo was born on the 22nd day of May in 1963. She was born in Soweto, Johannesburg in South Africa.

Her family was greatly affected by Apartheid in South Africa. Her family escaped to Swaziland during the Apartheid era, unfortunately, after their migration, her parent’s marriage was deeply strained and dissolved after a year.

Her mother left and returned to South Africa, Johannesburg precisely.

When she returned to South Africa in 1994, she met her mother in detention with signs of torture and got the news that her sister was dead at the hands of the South African security forces.

Ayandla Dlodlo had her education from primary to tertiary level in different countries as a result of her family’s migration as a result of the hardship created due to Apartheid in South Africa.

Ayanda Dlodlo joined African National Congress’s Military Organization at the age of seventeen. She went to Angola in 1980 to undergo military training.

When she returned back to South Africa she was employed at Portnet. She worked at the South Africa National Ports Authority and South Africa Freight Rail Company.

As a result of her military training, She led the Department of Safety and Security in Gauteng Province of South Africa. She was the head of the defunct Directorate of Special Operations also known as Scorpions.

She openly supported Jacob Zuma and became a member of the Parliament of the African National Congress (ANC). She was appointed in 2010 to serve as the deputy minister of Public Service and Administration during Jacob Zuma‘s administration.

In 2012, She took the position of the director of VIP Consulting Engineers and had to step down from her position as deputy minister but was recalled in 2014 and served till 2017.

She is currently the Minister of State Security of South Africa.

Ayanda Dlodlo met Theophilus Dlodlo in 1983 when they were detained by the authorities.

They were deported and moved to Lusaka in Zambia. They got married in Swaziland and they have a son Thabang Mnisi. Her husband died in 1987.