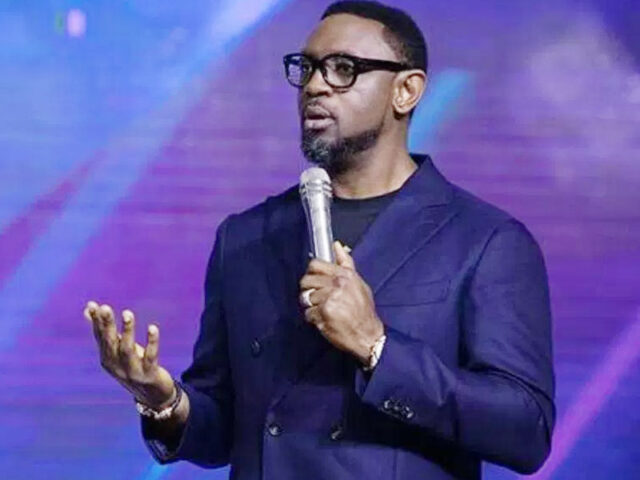 Pastor Biodun Fatoyinbo (born January 1, 1976) is a Nigerian minister of the gospel and a famous clergyman.

He currently serves as the senior pastor of the Pentecostal Ministry, Commonwealth Of Zion Assembly (COZA).

The church has five branches (nicknamed Campuses) in big cities in Africa and Asia.

He founded the church in 1999 at the young age of twenty-three and with the help of his wife, Modele, they have grown the ministry to a congregation of thousands.

Pastor Biodun Fatoyinbo is popular for his inspirational sermons and good fashion sense. He has been nicknamed Gucci Pastor in some quarters.

Pastor Biodun Fatoyinbo was born to the well-respected Fatoyinbo family on the 1st of January 1976.

Because he was born on New Year Day, his parents gave him the name, Abiodun, which is translated in English as Born On A Festival.

He is a Yoruba man who hails from North Central, Nigeria. He was born and raised in Ilorin by his parents. He is the first child of the family and has three siblings.

Though he had been taught good morals by his parents, Biodun joined a secret confraternity when he was in university. He and his fellow cultists terrorized the students and staff of the institution. This made the university management withdraw his admission and rusticate him.

In his bid to achieve his dream of becoming a graduate, he enrolled at the University Of Benin. It was at this university that his life took a new turn when he gave his life to Christ. He became fervent in the faith by serving God wholeheartedly. He was a member of his church’s choir where he played the drums and guitar.

In 1999, he received a mandate from God to start a ministry and The Commonwealth Of Zion Assembly (COZA) was born. The church was started in Ilorin.

Pastor Biodun Fatoyinbo studied at top primary and secondary schools in Ilorin and has his First School Leaving Certificate and West African School Certificate to show for it.

Since 1999, Pastor Biodun Fatoyinbo has been waxing strong in his ministerial work. His ministry currently has five branches (campuses) in Nigeria and United Arab Emirates. The church’s headquarters is located in Asokoro Extension, Abuja, where he and his wife, Modele, serve as Senior Pastors. With a congregation of over twenty thousand members, COZA is one of the biggest Pentecostal ministries in Nigeria.

Asides from Abuja, the other campuses are located in Lagos, Port Harcourt, Ilorin, and Dubai. The church is considered one of the leading new generation churches in the country. The ministry is quite popular for its many humanitarian programs in keeping with the biblical faith of showing love to everyone. Under the leadership of Pastor Biodun Fatoyinbo, the church runs an NGO called COZA Care Foundation. The foundation is responsible for organized programs such as Jesus Paid It All: Shop For Free (Yard Sale); and Leprosarium Outreach.

In the past Pastor Biodun Fatoyinbo and his church members have visited a boys correctional facility in Oregun, Lagos; organized a free medical test outreach program for residents of Irewole Community, Lagos; paid a visit to the inmates at Ikoyi Prisons so as to give out relief materials; and visited Oke Kura and Mandala prisons in Ilorin.

A lover of gospel music, he was inspired to form two music groups which he named – The Avalanche and The Gratitude. The former was created in 2008 while the second was formed in 2016. The mandate of The Gratitude is to create mainstream music with a spiritual message. It was a fusion of gospel and pop genres. While the mandate of The Avalanche is to compose and perform deeply spiritual praise and worship songs. The Avalanche has had the opportunity of performing in several Christian gatherings across the world. They have performed gospel songs alongside artists such as Tasha Cobbs, Tye Tribbett, and Don Moen.

The Gratitude became a household name after they dropped the single, Rabababa-Eh. The single became one of the choice praise songs in Nigerian churches. To commemorate their good work, the group won the Choir/Group Of The Year award at the UK Gospel Touch Music Awards.

In 2019, Pastor Biodun Fatoyinbo was a subject of a heated controversy when he was accused by Busola Dakolo, of sexual assault. Mrs Busola Dakolo is the wife of singer and songwriter, Timi Dakolo.

She made the accusation in June 2019, and it sparked a series of online outcries and protests. These outcries forced Pastor Biodun Fatoyinbo to step down as the leader of the church till August 2019. Legal action was taken against him by Mrs. Busola but it was dismissed by an Abuja court in November 2019.

The 45-year old man of God, Pastor Biodun Fatoyinbo is happily married to Mrs. Modele Fatoyinbo. He had tied the knot with his wife when he was twenty-four years old. This was in 2000.

He loves his wife so much and is grateful for the fact that she has stood by her side over the years. Their union is blessed with four children. The Fatoyinbos reside in a high-brow estate in Abuja and own other choice properties across the world. Pastor Biodun Fatoyinbo is also an entrepreneur as he has investments in some companies in Nigeria.

He is a firm believer of the doctrines of excellence and spirituality and they are the pillars by which he runs his ministry. He initiated the lingo, “I Celebrate You” which is spoken by his church members to one another. He and his church hosted American pastor, T.D Jakes, and the Vice President of Nigeria, Prof. Yemi Osinbajo.

The pastor lives a very comfortable lifestyle due to his earnings from his businesses. Pastor Biodun Fatoyinbo has amassed an estimated net worth of $1,700,000-$5,200,000.